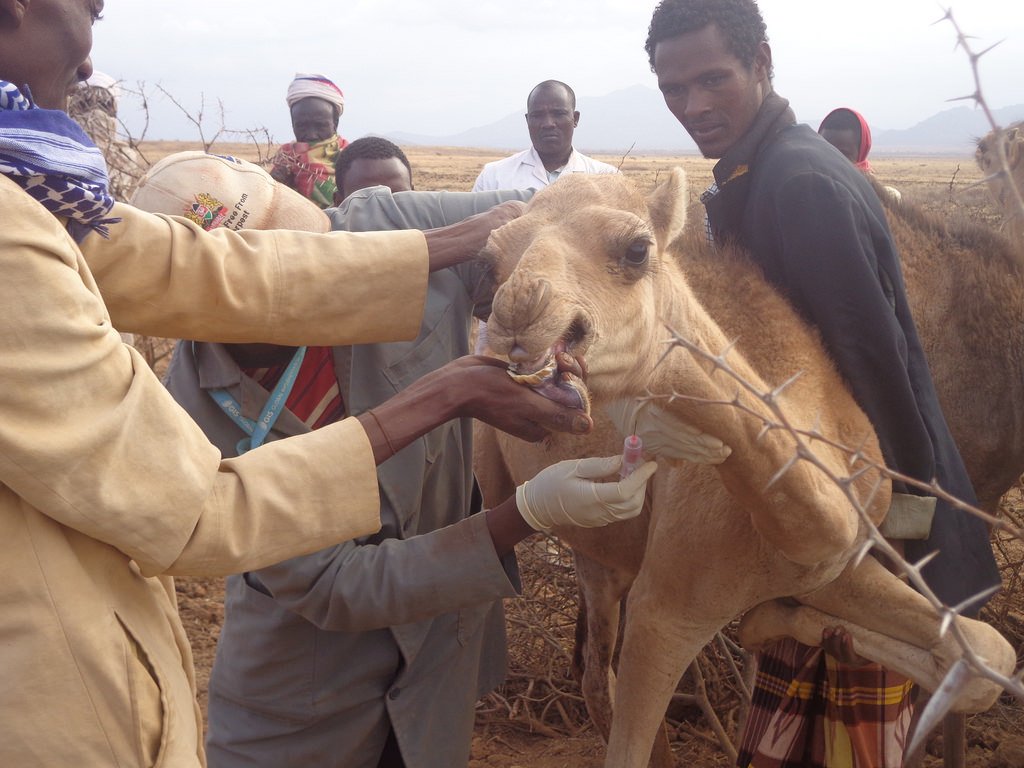 Men work together to bleed a camel during a brucellosis study in Marsabit County, Kenya

Geographical Distribution of Brucellosis in Africa (red marked). Source CDC, updated on 29 March 2019. Brucellosis is prevalent in most countries of the world.

A very common cause of abortion is Brucellosis, which can also infect humans. Brucellosis is an infectious disease caused by the Brucella bacteria. Brucellosis is a bacterial infection affecting primarily cattle, buffalo, pigs, sheep, goats, camels and dogs, and occasionally horses. People can catch the disease from animals. Brucellae may enter the body through mucousmembranes, conjunctivae, wounds, or intact skin in both humans and animals.
There are many other infectious abortions. But most labs in the country/region routinely only diagnose few causes of abortion other than Brucella (e.g. caused by bacteria or parasites such as Campylobacter, Trichomonas). However, close observation and submitting a full history together with the samples will help alert the lab on the possible involvement of other abortion agents (e.g. Rift Valley Fever).
Brucellosis is caused by four strains of the bacterium Brucella, in various livestock.
The disease in humans, sometimes called Undulant Fever, is a serious public health problem, especially when caused by Brucella Melitensis. Brucellosis in humans resembles malaria, and is often mistaken as such unless identified through laboratory testing. Cure of Brucellosis in humans requires a very long (2-3 months) and expensive treatment with antibiotics.
In animals, abortion is the most obvious manifestation. Animals abort from the 7th month onwards. Cattle of all ages and sex can be infected with B. abortus, but it is primarily a disease of sexually mature female cattle, with bulls and immature animals showing little or no clinical disease. Abortion due to Brucella mostly occurs during the last third of pregnancy. In unprotected herds 40% to 80% of pregnant females may abort or give birth to very weak newborns. After abortion animals give no or only little milk.
In some countries Brucellosis has been eradicated or brought under control by a program of blood testing, slaughter and heifer vaccination. However in most parts of East Africa there has been no control or vaccination and Brucellosis is common in both humans and animals.
In livestock it is not possible to treat Brucellosis. However, some cattle resist infection and a small percentage of infected cows spontaneously recover.

In non-pregnant infected animals the Brucella live inside the udder and are excreted with the milk. This presents a very serious health risk to anybody drinking raw milk. Brucellosis is a dangerous zoonosis. To protect yourself and your family always boil milk before consumption.

The disease can be controlled by:

Brucella infections are known to be persistent and hence treatment with antibiotic is not recommended. It is therefore not practical and not viable to make any treatment attempt.