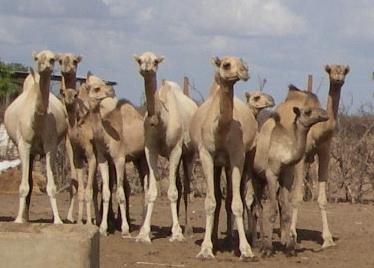 For camels there are no organic guidelines and regulation, however the organic principles should be respected, kept and practiced.

Origin of camels, including dromedaries

Camels are thought to have been introduced into East Africa by Somali speaking communities over 1000 years ago. These early pastoralists also had cattle, sheep and goats, but camels were better adapted to the dry climate and deteriorating rangeland of Northern Kenya and other dry areas of Africa. They contribute greatly to human survival in dry areas. Historically camels arrived in the region only after deserts had been created by overgrazing and the following land degradation. Perhaps had the camels come before the desert would not have followed, as camels do not deteriorate lands at the same rates as other livestock. They have no hoofs to destroy the fragile soils and they are mainly browsers, meaning grasslands do not become depleted where camels have fed. Camels produce milk throughout the lactation period, whereas cows and small stock dry up during droughts and prolonged dry spells. The total number of camels globally is said to be 20 million, but as most camels are owned by nomads, this number can only be estimated.

Understand camels as the animals they are

Camels come from the most barren and harsh places on our planet. Everything in the camel is designed to trap or save moisture; even their blood cells are different in order to deal with less water. They need more salt than most animals. They are not considered 'real ruminants', but they have a 3-compartment stomach and do regurgitate and rechew ingested forage, and they are very efficient in getting sufficient energy even from poor feed. Their body temperature can raise up to 6oC without troubling them seriously, and is often under air temperature. They can walk 3-5 days on almost no food.

They have a very good sight, and their eyes are surrounded by long lashes to protect them against winds and sand. and 34 sharp teeth which allow them to chew almost anything. Despite that they come from dry areas, they are good swimmers. Naturally they will rest during the hot days and feed in the cooler evenings.

A camel family would normally consist of a single male, one to many females and a group of young animals. The male ensures that the cows in the family avoid contact with strangers. Even though they are attacked and eaten by lions and other predators, they were not confronted with natural predators in their original dry environment. Some have explained their calm behavior by this fact: they are patient, quite bold, calm and observing, and rarely panic. They can in some cases confront threatening animals, rather than trying to escape. They have an excellent memory, and can find their way and remember people who did not treat them well. The picture of them as 'stubborn' and disobedient is completely wrong - they are normally very collaborative with humans.

Camels in East Africa and Kenya

All camels in Kenya are dromedaries or one-humped Arabian camels. Camels are used as multifunctional animals in pastoral production systems of east Africa with the general aim of producing milk, meat, blood, hides and skins, provision of transport, barter trade (sale and exchange), and social and cultural functions. Camels have an outstanding milk production, even in harsh environments, compared with cattle and small stocks under the same harsh environmental conditions. Their lactation persists well into the dry seasons and rarely ceases even during extended dry spells. Camel's milk is preferred to milk of other livestock species because of its taste, nutritious value, health reasons and it is perceived that camel milk prevents thirst even when walking for a long distances. Depending on the accessibility of the market, surplus camel milk is also sold for cash income by members of the communities. Meat production from camels is less important in the east African region due to low reproductive performance as compared to cattle and small stocks. Small stocks are the main source of meat to the pastoral communities, but camels are slaughtered for meat on some occasions.

Camel milk is slightly saltier than cows' milk, three times as rich in Vitamin C and is known to be rich in iron, unsaturated fatty acids and B vitamins, and is by some recommended to HIV/AIDS patients, and may play a role in reducing diabetes and coronary heart disease. It is a natural and essential food item in areas where there is a scarcity of water and forage. There may be 200 mill. potential customers in Africa. With improved feed, water and husbandry they can yield up to 20 litres per day.

Pastoralists emphasize that camels have a better meat quality because of the nutritive value and taste. Most camels are slaughtered at home for domestic consumption and the excess meat sold through a butcher. Camels are also regarded as a source of hides and skins, which are valuable raw materials for building huts and manufacturing utensils. Additionally camels are a source of blood that is mixed with milk to form a diet component for the young warriors who are also herders. Camels also have social and cultural functions including social transactions like gifts, loans to relatives and friends and food supply at the occasion of ceremonies. Sale and exchange of camels only occurs during droughts or when pastoralists are in need of high amounts of cash, such as for paying hospital fees or school fees. These unique and strategic uses of camel and related products explain the importance of the camel in the Samburu community. Despite all the benefits associated with camel production in the pastoral areas of East Africa, camels still faces challenges in their natural environment including camel diseases, drought and predation which expose the pastoralist to risks of loosing their source of livelihood.

Recurrent droughts and subsequent livestock deaths, as well as the closing off of important migration routes due to privatization of sections of the drylands for large-scale agriculture, are forcing pastoralists to diversify into agriculture and the market economy. Women are playing a key role in pastoralists' diversification in taking up agicultural activities and build up small vegetable farms, according to a recent report published by the Regional Learning and Advocacy Programme (REGLAP).

Former pastoralist families and officials report of being no longer dependent on food aid and malnutrition and anemia have both declined since the agriculture effort began. They depended on milk, meat or relief maize. Now, their children eat fruits and vegetables, something they never had before. Frequent hospital visits have reduced drastically (main crops grown are onion, beans, green vegetables, tomotoes, peas, watermelon, chilli, maize, coffee, grain and banana). Read more here and here

For camels there are no organic guidelines and regulation, however the organic principles should be respected, kept and practiced.
For more information on Animal health promotion and disease prevention click here

The 3 main breeds of camel found in Kenya are Somali, Rendille/Gabbra and Turkana. These are kept by communities who bear the same names as those of the breed. There is a fourth breed of camel called Pakistani which was imported from Pakistan into Laikipia ranches in Kenya in the early 1990s. However, only a few pure Pakistan camels exist while crosses with Somali or Turkana breeds have since moved out of Laikipia to Samburu, East Pokot, Kajiado, Northern Tanzania, Mandera and Marsabit districts.
Following is a description of these breeds;

Within the Somali breed are four sub-types namely Hoor, Siftarr, Aidimo and Gelab. These differ in physical, production and adaptability characteristics. While hoor is the highest milk producing sub-type, it is the least hardy. Gelab on the other hand is the smallest in body size, least milk producing but most hardy.