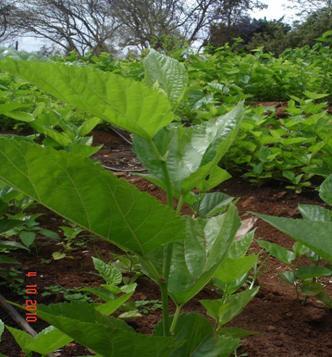 Mulberry foliage is the sole food for the silkworm (Bombyx mori) and is grown under varied climatic conditions ranging from temperate to tropical. Mulberry leaf is a major economic component in sericulture since the quality and quantity of leaf produced per unit area have a direct bearing on cocoon quality and quantity.

Mulberry is a hardy deep rooted tree that can do well in almost all types of soils. It is draught tolerant and can thrive in arid and semi-arid areas. It thrives best with rainfall of 400 mm and above. The optimum rainfall requirement is 800 mm per year.
Temperatures ranging between 20 - 30degC are found to be most suitable for mulberry growth. This is because growth and sprouting of buds are arrested at temperatures below 13 degrees while above 40 degrees plant growth suffers due to high evapotranspiration.
Since Mulberry is a deep rooted plant, the soils should be capable of supplying sufficient air, water and nutrients even at the deeper layers where the root system penetrates. The soil should be fertile, deep, friable, clayey loam to loam in texture and porous with good water holding capacity.

There are about 68 species of genus morus in the world majority of which occur in Asia. In Kenya, the dominant species is Morus alba. Some varieties do fairly well under rain fed conditions while others require irrigation. Below are some of the varieties in Kenya. Although these species may have originated from foreign countries during the colonial times, the naming of the varieties depended on where the mulberry tree was first sited in Kenya.

Mulberry is mainly propogated vegetatively by cutting, layering or grafting. Propagation by cuttings has been found to be the best method and is the current practice recommended for this purpose. Propagation by seed is only used in breeding work.

Land should be prepared by deeply ploughing up to a depth of 30-40 cm in order to loosen the soil. This activity should be done before the rains. Perennial weeds like couch grass and rhizomes should be removed. On steep land, over 30% slope terraces should be constructed preferably as a single row.

There are two methods of mulberry orchard establishment:

Under this method, mulberry cuttings are planted directly on the main farm. Without enough moisture a farmer is at risk of losing a large number of the cuttings. Direct planting should only be done when there is enough rainfall or under irrigation.

Nursery Establishment:
Depending on the type of soils and amount of rainfall in an area, prepare seedbed 21/2 months before onset of rains. This can be raised or sunken nursery depending on the soil drainage properties. The width of the nursery is 4ft (1.2m) and any convenient length. Mix half (1/2) a debe of well decomposed farmyard manure in ever 3ft2 (1m2).


Preparation of Cuttings:
Should be taken from mature shoots, 6-8 months old of about 1.5cm in diameter, mostly the grey part of the shoot leaving the young green top of the shoot. To obtain a good cutting, use a sharp pair of secateurs to make a cut slightly slanting away from the bud at the top (10% slant). The lower part is cut at 45% slant to facilitate pushing it into the soil. The length of the cutting should be 6 inches (15cm) long with 3-4 buds.
While preparing cutting care should be taken not to damage the bark or split the wood as the leaves open wounds that can lead to infection that lowers germination percentage.


Planting and Spacing:
The full length of the cutting is pushed into the soil, leaving only one bud above the soil level. Cuttings in the nursery are placed 6 inches x 6 inches (15 cm x 15 cm). Watering should be done regularly in order to keep the soil moist. This enhances faster root development.

Below is an illustration of how to plant:

Several shoots will sprout from one cutting but only one should be allowed to grow. Therefore all other shoots are cut off. Weeds are removed when noticed to reduce competition for food and moisture.

This is the transfer of saplings from the nursery to the main field. Saplings which are about 80-90 days old can be transplanted. While uprooting maximum care should be taken not to damage the root system. Before uprooting, the nursery should be well watered.

Spacing of Mulberry Plantation:
There are several spacing practices that have been adopted but mostly determined by the intended use, irrigated or rain-fed plantation. 5ft x 21/2 (1.5m x 0.75m) for rain-fed mulberry and 4ft x 21/2 (1.2 x 0.75) for irrigated mulberry. This will give a population of 4,000 trees per acre.


Digging of Holes:
The size of the planting hole should be 11/2ft x 11/2ft (45 x 45 cm).
Separate topsoil from subsoil and mix the topsoil with half (1/2) a debe of well decomposed farmyard manure then put it back into the hole. The soil level should be retained at least 10 cm below ground level to form a basin like structure.
At the onset of the rains, pull out the saplings and trim the roots and cut off the shoot to avoid loss of water by transpiration. Plant the sapling in the basin formed.
When the shoots sprout more soil is added to the soil to encourage the formation of secondary roots. If all uprooted saplings are not planted on that day, store the remaining ones in a damp place. One can dig a hole and place them inside or place them under shade and cover them with grass. Sprinkle water over them to keep them damp.


Inter-cropping:
Legumes can be planted between the mulberry rows, using the standard cultivation. However climbers or any other legume that requires spraying of chemicals that are harmful to the silkworms should not be intercropped. Inter-cropping with legumes can be done within the first year while the crop is young which leads to additional nitrogen to the garden and income in the first year.


Training of Mulberry Tree for Maximum Leaf Production:
Three months after the mulberry has been established in the main field, prune the shoots at the base level. This will allow more shoots to grow from the base.
After about 6 months, when these shoots attain a height of 3ft select 3 strong shoots. Prune at 1ft above the ground to establish the pruning/harvesting table.

Harvesting/Pruning:
Harvesting starts 9 months after transplanting from the nursery. Each plant produces an average of 1kg of leaves in the first season. On attaining maturity in the 3rd year, the tree should give 2kg per tree giving a total yield of 20m/tons/ha/season of mulberry leaf. Depending on the rainfall pattern, 3-5 crops can be realized in a year.

Methods of Harvesting:
The most used methods of harvesting are:

(i) Leaf Plucking - individual leaves are harvested from the stem. When this method is used the remaining shoot is later harvested for the older silkworms ensuring that the tree is well pruned after each rearing.
(ii) Shoot Harvesting - shoots with leaves are pruned at the harvesting table (30cm from the ground).

Avoid harvesting yellow, over mature and diseased leaves for they have less moisture and low nutritive value.

(i) Harvesting should be done in the mid morning and stored in the leaf chamber. The leaves should be covered to preserve freshness of leaves.

The most common diseases of mulberry are:

Symptoms:
The diseased leaves have a number of circular irregular dark brown spots of various siyes with clear boundaries and white centers. Occassionally the spots enlarge to cover the whole leaf below. Usually the incidence is more during rainy seasons.
Under field conditions older leaves have been found to be more susceptible.
The infected leaves are not suitable for feeding the silkworms.

Control:
Leaf for feeding silkworm should be harvested at the recommended period to avoid leaf spot attack as this disease is prevalent on old and over mature leaves. Proper cultural practices like weeding out the alternate hosts, removing the affected leaves, and infected leaves should be removed and burnt.

This is caused by the pathogen Phyllactinia corylea.
Powdery mildew is prevalent during the cold months and under humid conditions in the tropical regions.


Symptoms:
Grey powder appears as whitish patches and quickly covers the entire surface of the leaves. It is found on the underside of the leaves. The diseased leaves are not suitable for feeding silkworms.

Control:
Maintain proper spacing and timely harvesting. The affected leaves should be picked and destroyed.

Thrips (Pseudodendrothrips mori Thysanoptera: Thripidae) infested Shoot
Nymphs and adults of thrips lacerate the epidermal leaf tissues and suck the oozing cell sap leading to damage of guard cells and finally drying of leaves. Affected leaves show streaks in the early stages and blotches in the advanced stage of the attack.

The most prominent symptom is characteristic 'hopper burn' yellowing of leaves all along the leaf margin and reduces the plant vitality and yield. In the final stages of the attack the leaf becomes cup shaped and withers off prematurely.

Mulberry, like most of the economic plantations and field crops, is also subject to the attack of a vast pest complex belonging to a large number of insects.

The caterpillars attack the shoots of young plants and cut them. The cut portion of the shoot dries up and falls down. They also feed on leaves. Newly sprouted mulberry garden or the garden having young plants are found without branches having dried leaves.


Control:
(1) Deep ploughing of the mulberry garden exposes the different stages of pest which can be picked up and killed.
(2) Deep digging around the mulberry plants after pruning exposes cutworms that are close to the plant.

Moles can be very destructive to Mulberry and can wipe out a whole garden.


Control:
Fence off the Mulberry garden to keep away both domestic and wild animals.