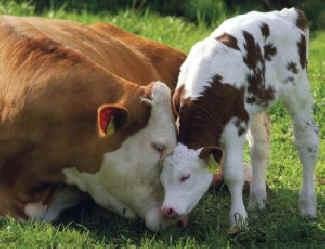 Infonet-Biovision promotes the IFOAM Principles for animal health and welfare management as they contain guidelines for humane treatment of livestock.

In the following we present the key features of the standard system with focus on animal husbandry (health and welfare, medicine, feeding, breeding)

The International Federation of Organic Agriculture Movements (IFOAM) has produced a set of international organic standards, laid down by people from many countries. These give guidelines about what organic farming is and how it should be practised on the farm.

International standards are also used to help countries set their own standards, which take into account different farming systems. Many countries have an organic standards authority which lays down national standards and awards a symbol to farms which have followed the standards. This symbol then allows farmers to market certified organic produce. This is important, as it ensures that people know that the food which they buy is organic.

What products are covered by the Standard System?

The IFOAM norms cover a wide range of products including crop production, livestock, wild products, processing, fiber processing, and aquaculture among others.

What the IFOAM Basic Standards say on animal husbandry

There is a range of standards regulating the management, shedding, feeding, veterinary treatment, breeding, purchase, transport, and slaughter of farm animals in detail. Some of the most important standard requirements are listed on the illustration below. Organic animal husbandry means not only feeding organic food and avoiding synthetic food additives, but also putting a focus on satisfying the various needs of the farm animals. Good health and welfare of the animals are among the main objectives. Suffering due to mutilations, permanent tethering or isolation of herd animals must be avoided. For various reasons, landless animal husbandry (i.e. fodder purchased from outside the farm, no grazing land) is not permitted in organic farming.

The operator shall ensure that the environment, the facilities, stocking density and flock/herd size provides for the behavioral needs of the animals.

In particular, the operator shall ensure the following animal welfare conditions:

6. Herd animals shall not be kept in isolation from other animals of the same species. This provision does not apply to small herds of mostly self-sufficient production. Operators may isolate male animals, sick animals and those about to give birth.

7. Construction materials and methods and production equipment that might harm the animals shall not be used

8. Operators shall manage pests and diseases in livestock housing

The IFOAM principles with particular focus on animals

Organic agriculture is based on:

The principles are to be used as a whole. They are composed as ethical principles to inspire action. In many other places on this website, you can find many details, suggestions and recommendations leading to action. The IFOAM principles are guiding this, and below an extract is shown with particular focus on animals and creating living conditions for them according to the principles.

In the section about Human-animal relations, you can also find the IFOAM principles specifically guiding the relations which we as humans can create with animals

Organic Agriculture should sustain and enhance the health of soil, plant, animal, human and planet as one and indivisible.

Organic Agriculture should be based on living ecological systems and cycles, work with them, emulate them and help sustain them.

Organic Agriculture should be managed in a precautionary and responsible manner to protect the health and well-being of current and future generations and the environment.

The IFOAM Standards on Mutilations

Mutilations are all forms of physical injuries done to the living body, which degrades the appearance or functions, and which have no healing purpose.

In livestock farming, animals are most often subjected to mutilations because it decreases the damages, which they can make to each other when they are confined or kept. Under confined conditions they may not have space enough to perform their species specific behavior.

Mutilations are generally not allowed in organic animal farming

The general principle for organic animal farming according to IFOAM is that 'Organic farming respects the animal's distinctive characteristics'.

This means that animals should be intact, and their integrity should be kept.

The IFOAM basic standards give the following recommendations:

The first recommendation stresses that damages, which animals can do to each other, should be prevented by selecting animals (species and breeds) which have minimum risks. For example, some sheep have very loose and folded skin, which gives high risk of attacks from flies and maggot infestation. These sheep are therefore subjected to a practice where their skin is cut so that it is less folded - this is called 'mulesing'. This is obviously painful and in organic farming and this breed should be avoided in organic farming. Surprisingly, mulesing is still allowed according to the IFOAM standards, until 31st December 2015.

The second and third recommendation is tricky, because this is exactly the arguments which are used to justify mutilations e.g. in factory farming. Mutilations keep suffering (in terms of damages to the animals), to a minimum in many farms where the conditions are not animal friendly. In organic farming we have to combine this recommendation with the other norms: 'it is to keep suffering to a minimum even under conditions where everything possible is done with regard to breed and surroundings'.

In the IFOAM basic standards, it says

The following exceptions may be used only if animal suffering is minimized and anestaetics are used :

In research and practice, solutions are constantly searched for to avoid mutilations, including the above mentioned.

How can we judge whether a mutilation is severe or less severe?

A mutilation is always severe, because it is about doing physical injuries. But some are very severe, because they have long lasting impact on the animal, maybe even lifelong impact. A castration is a mutilation which severely diminishes or removes all sexual desires and behavior the rest of the animal's life - that is severe!

It is relevant to ask ourselves the following questions in order to judge whether a mutilation can be justified in any way:

What is accepted by society?

This is really not a criteria for whether a mutilation is acceptable or not - sometimes people or 'society' accept horrible things, just because they are used to it, and it has turned into a habit. It is, though, thought stimulating to think about what is perceived as 'normal'  and compare it to the above criteria.

Below a list of different types of mutilations, most of which are prohibited in organic farming. Alternatives are discussed.

Mutilations for identification and record keeping