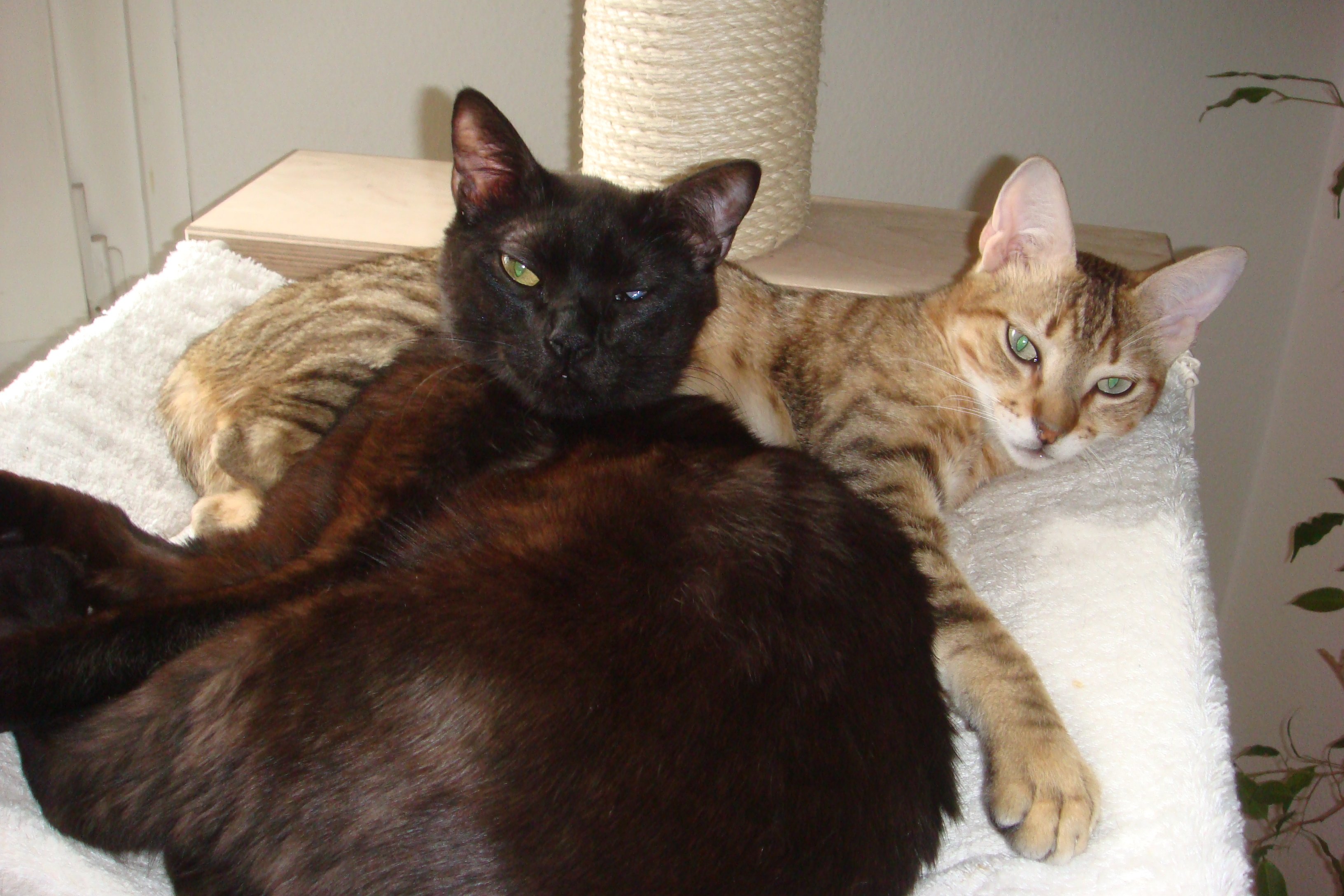 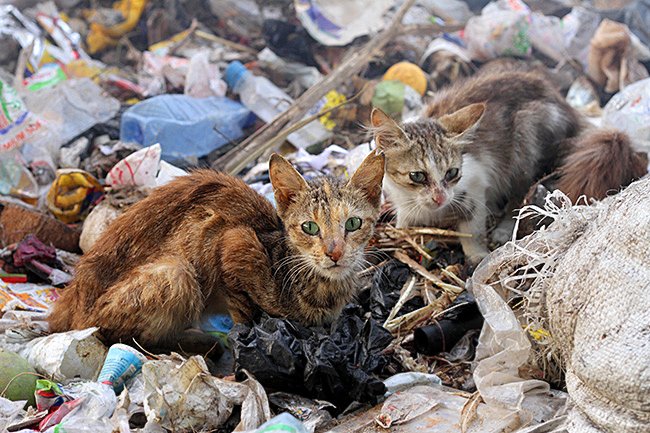 Cats in garbage in Lamu 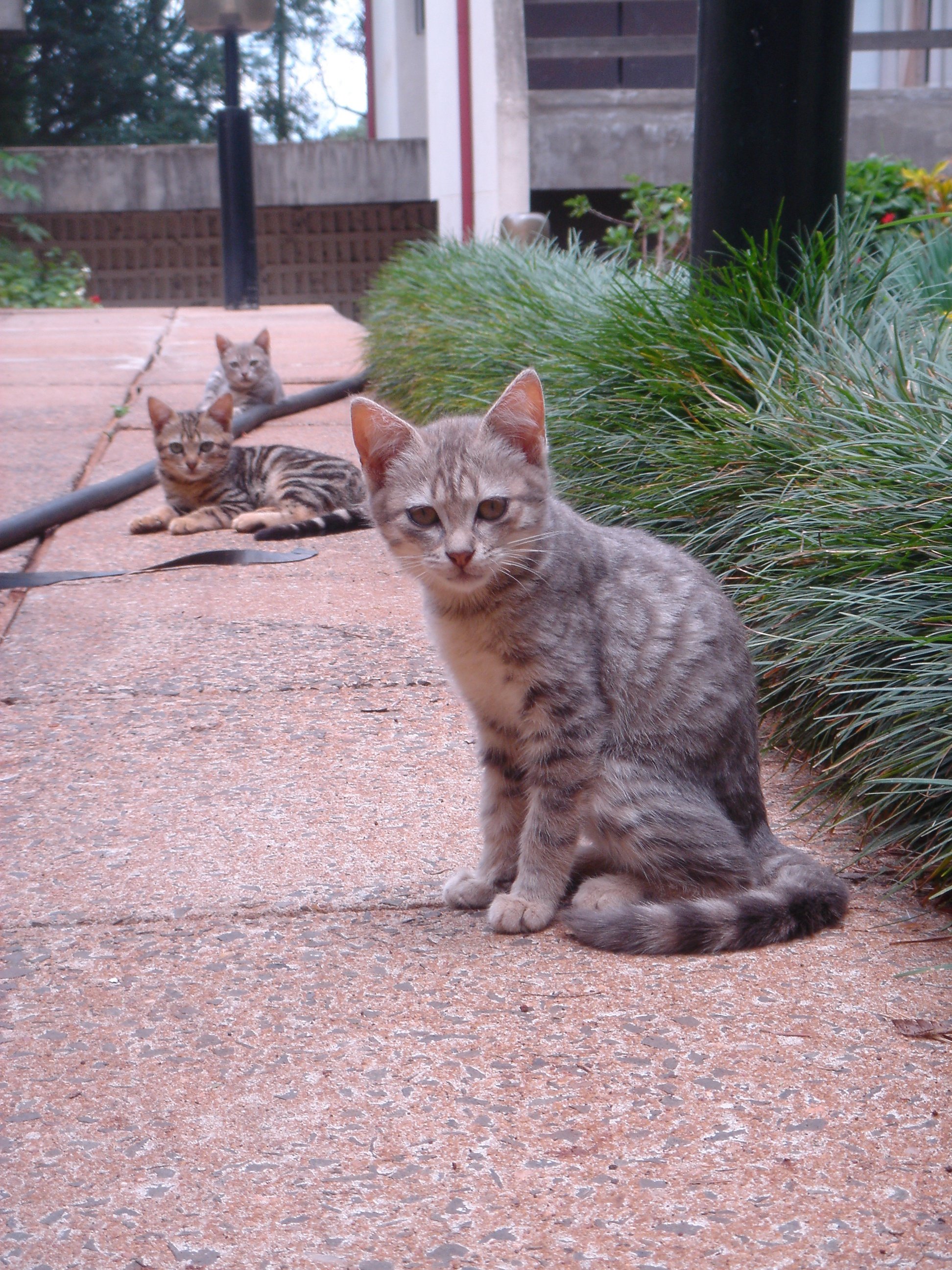 Every cat has its own personality

Cats may resemble one another but every cat has its very own character and behavior. This pronounced individuality is probably their most important characteristic - one that makes cats so popular among human beings. Nevertheless, given their origin and biology, cats share many characteristics.

Cats, however, are not only individualists but also highly adaptable. And they expect the same of their human counterparts, for instance consideration and thoughtfulness. If owners are able to adapt to the habits and wishes of their cats, the resulting relationship will prove to be fruitful for both parties.

The cradle of the house cat (felis silvestris f. catus) is Africa. The original form of the house cat is the African wildcat or desert cat (felis silvestris f. lybica). In comparison to the dog and to other animals (cattle, goats, sheep), the cat is a young and still primordially natural domestic animal. Cats were ,,only" domesticated approx. 5,000 years ago, in Ancient Egypt, where they were appreciated as mice hunters and venerated as goddesses. Specific racial breeding only set in at a much later point in history. The first cat show ever organized took place in London in 1871 and lead to the formation of cat breeding associations.

A short history of domestication and breeding means that house cats are still able to live independently of human beings - even if they are abandoned by them.

The European Wildcat (felis silvestris silvestris) did not play a role with regard to the evolution of the house cat. Cross-breeding between house cats and European wildcats or other wildcat species (e.g. the Bengal Cat), however, is possible and further proof that house cats still have a lot in common with their wild relatives.

Today, we know of approx. 100 recognized races or species of cats - a modest figure, in comparison to dogs. However, the majority of cats today do not belong to any specific race.

Even the most sophisticated and well fed of cats will want to hunt, even if only in play. Young cats need to learn and practice hunting behavior, because hunting is in their genes as well as being an important activity that takes up much of their daily activities.

All kinds of animals - from insects to small birds or mice all the way to rabbits - are potential prey for cats among whose most frequent skills is the raised-hide hunting method. In other words, cats can sit and wait patiently for hours for a mouse to pop out of its hole or a bird to come within reaching distance, before they pounce on their prey, as quick as lightning, at just the right moment. Despite this commitment, hunting success is not guaranteed and a cat must also learn to come to terms with failure. Cats often play with their prey, sometimes for hours on hour. This might seem brutal is, however, natural behavior.

Cats hunt on their own but they are far from being loners or rogues. Contrary to common perception, most cats (approx. 90%) are sociable not only towards human beings but also towards other cats. Their social behavior differs from that of dogs in many respects (cats, for instance, hardly ever behave subserviently). Amongst others, cats adopt welcoming rituals (pushing their heads towards you, purring or meowing in a friendly manner); they lie and sleep with body contact, lick each other and play together. Naturally, cats can also behave aggressively - just like human beings. Breeding female cats, primarily related cats, sometimes join forces to ensure brood care; whereas tomcats do not contribute to the upbringing of their young.

Whether a cat behaves socially or is a loner; whether it is shy of humans or trusting, is decided during what is referred to as the imprinting phase at the beginning of its life. If a cat is in contact with its siblings between its 2nd to 8th week of life or with other cats (in the same household) or human beings, then it will maintain such social contact for the rest of its life.

With the exception of humans (i.e. traffic), cats have hardly any natural enemies. Therefore, they do not have to be ready to run away at any time. This is expressed in a cat's behavior. If cats are not hunting, they enjoy doing nothing in particular for 16 hours a day on average. This does not mean that they spend this time sleeping but much rather observing what is going on around them. And if there is a good opportunity to ,,take action", for instance to play, they will cheerfully take it.

During the calmer hours of the day, cats will clean themselves extensively. Cats will lick one another as well, less out of a need for cleanliness, but more as an expression of friendship during which body odor substances are exchanged and a "family smell" is created.

There is hardly a cat's characteristic that could not be expressed with superlatives: their senses are outstanding (sense of smell, touch, and hearing, eyesight) as well as their physical capabilities (rapidity, skillfulness, ability to climb, strength). And this is far from being all: cats find it easy to learn, in particular young cats. Thanks to all these characteristics, cats are true survivalists. The sole thing that is truly dangerous to them and where they stand unprotected, unless vaccinated, are viral diseases. A cat's average life expectancy is 10 to 15 years; whereas some cats can easily grow up to over 20 years of age, especially when kept inside.

Cats are adaptable and able to come to terms with different situations in life: From farm cats that lay back long distances, are given a bowl of milk and receive little attention otherwise, to special breeds that spend their lives indoors or at cat shows, you find everything. This could lead you to believe that species-appropriate holding of cats is child's play - but this is not the case.

It is important that cats allowed to roam around outdoors freely be castrated in due time in order to avoid uncontrolled reproduction and suffering. In addition, castration also leads to a reduction of marking with urine and other cleanliness problems in the household.

Every year, innumerous cats are reported missing. Although it is not legally required to chip cats, the implantation of a (micro) chip is recommended for cats allowed to move around outdoors freely. This helps to find lost cats more quickly and to be informed in due time if they have died.

Vaccinations are also important to ensure the good health of cats that are prone to contract viral diseases and spread diseases to other cats.

Today, many cats receive good health care and nutrition, so that boredom is the largest problem they face. This applies in particular to cats kept indoors - a special chapter has therefore been dedicated to this topic. To prevent boredom in cats allowed to roam around outdoors, they should be given the possibility to exit and enter whenever they wish via a cat's flap or a cat's ladder.

It is almost always preferable to keep two cats instead of one, because contrary to popular belief, most cats are not loners. This is not absolutely necessary if cats are allowed to go outdoors, because they have the opportunity to play with neighbors' cats.

Every cat needs withdrawal zones where it will not be disturbed. Therefore, cat owners away at work all day should not lock their cats out of the apartment or house. A cat's flap is usually a good solution. There is also a very large choice of withdrawal and rest infrastructure for cats to be purchased. But often, simple means also suffice, e.g. a cardboard box. Often, cats will not make use of the infrastructure or bedding foreseen for them. Therefore, they should be offered a generous choice.

Holding a too large number of cats in the same household can lead to considerable stress for the individual animals. We would therefore recommend against holding groups of more than eight cats. The probability of at least one of the animals marking in the house is higher in larger groups and leads to stressful situations for the owner.

Cleanliness is very important to cats. A lack of cleanliness and other behavioral disturbances, e.g. aggressiveness, are often to be led back to mistakes made by human beings with regard to cats' litter boxes. At least one litter box is required for every cat. The box should be placed in a quiet area and it should not be covered with a lid, because by nature, cats do not withdraw into caves to do their business. Cat litter should be odorless to not overtax the cat's fine sense of smell. And what is very important: A cat's litter box should never be placed in the proximity of its feeding or drinking bowl.

A good relationship between cat and owner

Most cats feel drawn to people and appreciate social contact with them. They appreciate it all the more, when their current mood and need (e.g. to be left in peace) are respected. A cat's language - face and body language - as well as the noises it makes and the distance it keeps all indicate clearly its feelings and desires. Observing a cat well and catering to its wishes will help to build a sound relationship with it.

Preventing is better than curing!

How to carry out checks and provide treatment yourself?

With practice - and provided the cat cooperates - you can provide the following care yourself:

When to take your pet to the veterinary?

Primarily, vaccinations should be carried out according to the vaccination plan (re. above) and repeated regularly. In addition to this, cats should be brought to the veterinary for castration.

If you realize that a cat is no longer as active as usual, if it refuses food or shows clear symptoms of an organic disease, you should take it to a veterinary as quickly as possible. The quicker a diagnosis is made and treatment is initiated, the faster the cat is likely to regain its health.

In emergencies, such as car and other accidents, the breaking of bones, etc. owners should always take their cats to a veterinary.

The most frequent diseases

Only the most important of the very many cats diseases can be mentioned here:

Generally, in many countries cats are treated well - but this most popular of pets is also abused:

These stipulations only cover the absolute minimum requirements that should not prove to be too difficult to fulfill. Consequently, all cat holders are called upon to consider further requirements and what more can be done to ensure the species-appropriate keeping of cats.

Caring for Cats in Kenya  www.julieoneill.com