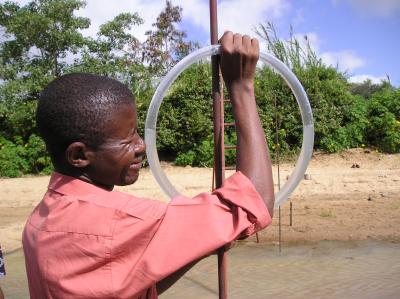 Surveys of riverbeds should always be carried out in the driest seasons when water levels are at their lowest. Information and mobilization of communities should also be implemented in the dry seasons when water supplies are scarce and people are concerned about their water supplies and have more time because of less field work.
In Kenya all types of water projects must be approved by the Ministry of Water (MoW) and the Water Services Board (WSB) in accordance with the Water Act of 2002. This process is valid for all types of water projects, including privately owned structures, except catchment of rainwater from roofs. Permits for construction of water projects require the following documents:
1. Community owned water projects must have a Project Committee elected by the community members and obtain a Registration Certificate from the Ministry of Social Development (MoSD). Private water projects do not require Registration Certificates.
2. Registration Certificates can be obtained by presenting to the MoSD; a) a Land Agreement which declares that the land for their water project and access road to it is Public Land which is accessible for the project members and b) a By-law with rules and regulations for the community which the MoSD can help the community to make. After approval and payment of a small fee the community will receive their Registration Certificate. Private projects do not require Registration Certificates.
3. A Site Evaluation Report and a Survey & Design Report with technical drawings, a Bill of Quantities (BQ) and a map sketch of the site are required for all water projects, except private roof catchments, by the MoW and WSB to issue permits. Community owned water projects must also produce their Registration Certificate with copies of their Land Agreement and By-laws.
4. An Environmental Impact Assessment Report from the Ministry of Environment and Natural Resources (NEMA) is required by MoW and WSB for both privately owned and community water projects to prevent damage to the environment.
5. The Water Resource Management Authority (WRMA) is also required to give their permit to prevent over-exploitation of the nation's water sources.
6. The MoW will then request for an annual fee for extracting water from rivers, boreholes and hand dug wells before the final permit can be given and the construction work can be started.
7. MoW must inspect and give written approvals for several stages of construction works, such as excavations, foundations and reinforcements as well as a Completion Certificate upon successful completion of the construction works.

A community that would like to construct a new water project or to rehabilitate an existing water project must elect a Project Committee consisting of a Chairperson, a Secretary, a Treasurer as well as a deputy for each of these three persons. Other committee members should be the local Chief, an officer from the MoSD and an engineer or technician from the MoW or the WSB.

Preferably, the Chairperson should be a village elder who is experienced in handling meetings and solving human conflicts. The Secretary is usually a teacher who is conversant with English and office work. The Treasurer is often a business woman who is respected for her handling of money and bank matters.

It is usually beneficial if the local Member of Parliament (MP) or Councilor can be the project's Patron, mainly because MPs distribute large funds from the Constituency Development Fund (CDF) for development projects.

A Land Agreement for a community water project is also required by the MoSD before a Registration Certificate can be produced.

The agreement must state that the owners of the land in question agree that the land will be used for a community water project and its access road has been declared public land that can be used freely by the project members for drawing water.

Often it may take considerable time and, perhaps payments, to obtain such an agreement but it must be obtained to prevent the owners, or their descendants, from claiming the project being their private property at a later stage.

By-laws and Land Agreement are presented to the MoSD for their approval.

The By-law for a proposed water project consists of rules and conditions which the members have agreed upon for construction and management of their water project. An MoSD Officer, who is a committee member, can assist with writing the By-laws along the following guidelines:

1. Name of the project and where it is located near a village in sub-location, location, postal address, mobile numbers.

2. Type of water project and its capacity of supplying water.

3. Number of households to benefit from the water project.

4. Conditions for becoming a member of the project.

5. Duties of the members and committee members.

In most cases a By-law is written by hand on some pages of A4 paper and stamped by the local Chief.

A Registration Certificate is issued to an approved community group.

The certificate allows the community to seek financial assistance from e.g. the CDF, the local WSB, a Non-governmental Organization (NGO), a bilateral donor, such as Danida or Sida, or an UN organization, such as UNICEF, FAO, ILO, etc.

In most cases, the Client will give the highest priority to finding sites for hand dug wells along seasonal riverbeds or in shallow ground water because they are the most cost efficient water sources. In areas without suitable riverbeds and shallow water tables, the Client may give the second priority to harvesting rainwater from roads into either small earth dams or ground tanks. Where large roofs are available, such as at schools and hospitals, the best option, although expensive, may be gutters and

Where a well is proposed in a river bed, the Surveyor will be contracted to carry out a detailed survey with probing of the selected stretch of the riverbed.

Plan and profiles of a probed riverbed

The probing data is used for drawing the plan and profile of the riverbed to show the best place to sink a well and to perhaps build a subsurface dam. Survey reports should contain all measurements taken at the site as well as analyses of water, sand and soil. These data combined with rainfall data will determine the expected yield of water from the structure.

Design drawings are made by adapting computerized standard drawings to the specific site conditions.

MoW requires 5 sets of drawings of the probing and designs in A2 format.

MoW, WSB, WRMA and NEMA stamp and sign the drawings when they are approved. One of these copies is returned to the Client as the permit to construct the structure.

Design drawings are used by a Quantity Surveyor to calculate the labour, tools and building material required for the construction work. However, for small structures, such a hand dug well built according to a standard design, the standard BQ for an 8 metres deep hand dug well with a bucket lift, can be used to estimate BQs for other hand dug wells by dividing this BQ with the depth of 8 metres and multiplying that figure with the depth in metres of any other well.

Should a hand or motor pump be preferred instead of the bucket lift, then the difference in cost is added.

BQs are used to calculate the construction cost of structures, such as a hand dug well, in order to estimate a realistic budget, which must be part of any Project Proposal. The best method to establish the construction cost of a structure is to photocopy a BQ and give a copy of it to each of at least three contractors and 3 suppliers of materials while asking them to give a quotation. To prevent over-pricing and cheating it is important that the contractors and hard ware owners do not know who else are giving quotations. When comparing quotations it is also important to consider issues such as delivery time, delivery capacity, warranties, qualities, down payments and final payments, because the cheapest quotation may turn out to be not the cheapest after all.

Tenders are used instead of quotations for large and complicated structures to be constructed by governmental and other organizations. Advertisements for tenders are published in the daily newspapers to invite qualified contractors and suppliers to collect tender documents at a small cost from the Clients offices within a certain period.

Firms interested in presenting a bid (a tender) will obtain quotations from sub-contractors and suppliers as well as estimate the cost of personnel, transport equipment, etc. A detailed budget and logistical framework must also be included in a tender document. Bids are separated into two parts; a Project Proposal without budget and a Budget without project proposal.

Tender Committees will spend a few days studying first the Project Proposals and each member will give his/her marks for the viability of each of the Project Proposals. Thereafter the envelopes with the Budgets will be opened, studied and marked by each member. The most ideal bid is found by comparing these two set of marks and a contract is formulated with the successful bidder. Working time and other expenditures spent on giving bids cannot be paid for.

The construction works can now be started!