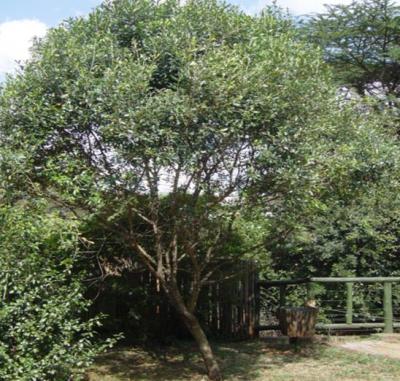 Found from Ethiopia to southern Africa, also on the Arabian peninsula and to India and China. In Kenya found in most inland highland areas from Taita Hills to west and northern Kenya. Common in dry Olea-Juniperus-Podocarpus forests and forest margins, 950 - 2,500 m. Found on rocky hillsides, forest margins and along dry riverbeds, where it may occasionally form a pure stand.

This tree is native to; China, Eritrea, Ethiopia, France, India, Italy, Kenya, Mozambique, South Africa, Spain, Swaziland, Tanzania, Uganda and Zimbabwe. It produces the heaviest woods known. Popular with the Maasai for making rungus (clubs) The poles are strong and used to support the heavy earth roofs of traditional Maasai houses. The charcoal is used for cleaning calabashes and the sticks for smoking milk gourds. Burning branches are used for flavouring soup and giving it a nice smell. O. africana is a complex of several subspecies and varieties

Altitude range is between 800 m and 2 500 m  above sea level. It does best in good forest soil, but once established, can withstand poor soils with little moisture. Is distributed in agro-ecological zones II - III.

Wildings and seedlings (difficult to raise) may be used to propagate it. Unfertilized seedlings show drought tolerance whilst fertilized seedlings do not. Fertilization with adequate watering results in greatly increased shoot growth but little change in root growth, In summary, plants need adequate nutrition and water to grow, and irrigation or fertilizing plants usually increases their growth where water or nutrients are deficient. Fertilization and irrigation need to be carefully managed to ensure optimal growth is consistent with post transplant survival. Pruning, thinning where necessary, pollarding can be used in management of the trees.
Seed storage behaviour is orthodox. Viability can be maintained for several years in hermetic storage at 30C with 6-10% mc. The seeds can be stored at dry room temperature for a few years. There are approximately 13 800 seeds/kg.

This is not a serious problem and so no information about the same.