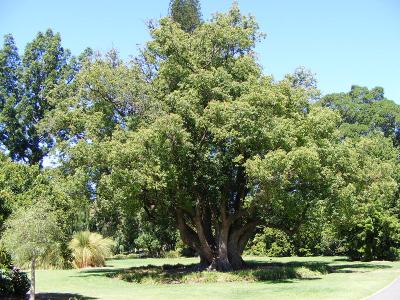 A majestic evergreen timber tree widely distributed from the eastern parts of the DRC and Rwanda, throughout eastern Africa to northern parts of Malawi and Zambia. More common in wetter forests.

Planting of this useful, valuable (and now rare) tree should be encouraged. The timber is one of the best for furniture, although not resistant to termites. The tree is easily propagated from root suckers, a practice widely used in northern Tanzania.

Optimum growth requires deep fertile soils with good drainage. Once dominant in the wet forests of the eastern Aberdares and southern Mt. Kenya, up to 2,600 m, also in Taita Hills, but now rare everywhere due to over-exploitation. Agro-ecological zones I - II.

Root suckers and seedlings may be used to propagate it. It is fast growing and responds well to coppicing. Occurs in plantations and mixed systems.