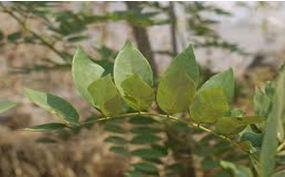 A branch of Gliricidia sepium

It is native to El Salvador, Guatemala, Honduras, Mexico, Nicaragua, Panama and US. A tree or shrub, it is wide spread in the tropics due to its many uses and speed of growth.

General information about the tree:

The Latin name means "rat-killer" as a poison can be made from the leaves which is toxic to rats as well as other non-ruminants like pigs, donkeys and horses. Bark, roots and seeds may also contain poison. A very useful quick fence can be grown from crossed stakes which soon sprout. Wood is resistant to termites.

It grows in a variety of soils, both acidic and those low in fertility, mainly in humid lowlands. Altitude is between 0 - 1,600 m. In Kenya it also does well in drier areas like Kitui and Isiolo. Agro-ecological zones III - VI.

Propagation is by seedlings, cuttings and direct sowing at site. Cuttings are the best option for live fence. They are fast growing; pruning and pollarding are the main management activities. Pruning at 0.3 - 1.5 m stimulates leaf production and pollarding at 2 m or above is recommended for optimal wood biomass production. Coppicing is used where the primary objective is firewood production. G. sepium has been shown to tolerate lopping and browsing.

Cercosporidium gliricidiasis, causes small, light brown, rounded spots with dark borders and is widely recorded. Other diseases include Sirosporium gliricidiae, which is associated with poor-growing trees, on which attacks can often result in moderate defoliation; Cladosporium sp., which caused defoliation in Costa Rica; and scab, Sphaceloma spp., which is manifested as brown lesions on the petioles and stems, has been found in Honduras. Of significant interest is the fact that it is resistant to the psyllid Heteropsylla cubana, which has caused serious devastation toLeucaena leucocephala.

Twig, stem and branch die-back caused by Botryosphaeria, Nectria and Phomopsis spp. have been recorded in Central America, Asia and Africa. Virus-like symptoms, including leaf curl, shoestring leaves, foliar distortion, mosaic, and mottle, have been noted in Central America. Leaf defoliators such as Hylesia lineata, Erynnis spp. and Spodoptera spp. have been reported to attack trees less than 3 years old as well as older trees in Central America. The aphid Aphis craccivora has been reported widely in India, Uganda and Trinidad. There have been no serious attacks from these insect pests except in the Dominican Republic, where serious aphid attacks have been recorded. In its natural range, G. sepium has been observed to die back extensively following production of abnormally small leaves (little leaf disease).