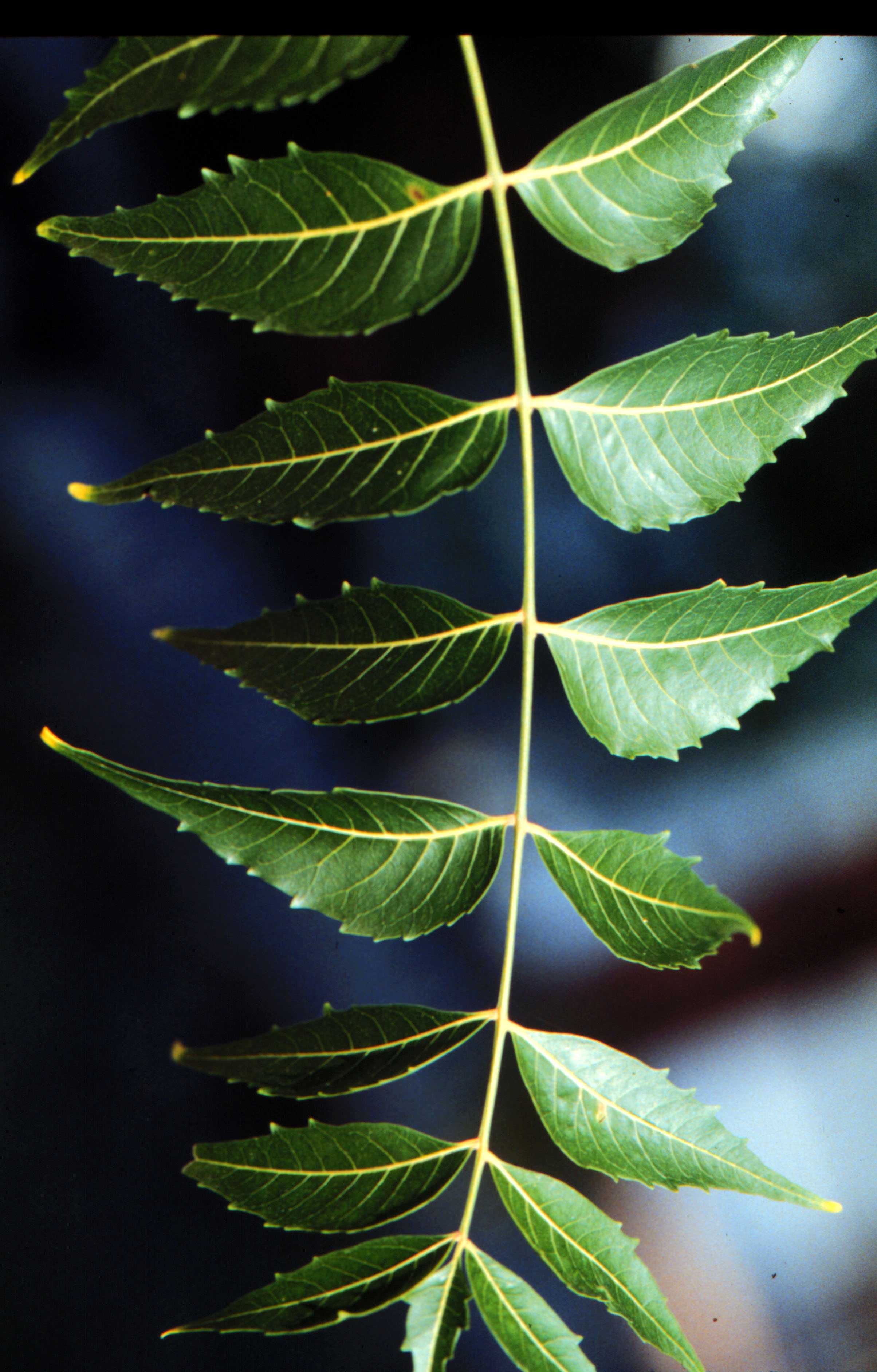 The Neem tree originated from the Indomalaysian region and is now widely grown in almost all African countries as well as in arid and semi-arid areas of the world.

In Kenya, especially along the Coast, the Neem tree is very well known: in Kiswahili its name is "Muarubaini", which means the tree of the forty cures. The tree, which grows up to 30 meters and can reach an age between 100 and 200 years, provides shade and timber. The seeds, leaves and bark can be used to produce medical, cosmetic and insecticidal products. Extracts from seeds and leaves can be turned into medicines against a number of ailments as well as insecticides for agricultural use.

Especially the oil, produced out of the seeds, is a much sought after ingredient for cosmetic products. Because it is an evergreen and fast growing tree, Neem is a favourite for reforestation. The wood is useful as building timber because termites will not attack it. When planted on slopes, the tree can help to combat erosion and landslides. The fallen leaves help to neutralise acidic soils.

Neem has a wide climatic adaptability and thrives under sub-humid to semi-arid and arid climatic conditions. It is generally found in areas with mean annual temperatures of 21 to 32degC. It can survive hot temperatures (reportedly up to 50degC), but does not tolerate frost or extended cold, although there are some reports of neem trees surviving light frost. Generally, at temperature below 4degC leaf shedding and death may occur.

The neem tree grows in areas with mean annual rainfalls of 450 mm up to 1,200 mm. It can grow in regions with an annual rainfall below 400 mm, but in such cases it depends largely on the ground water levels.

Neem grows in areas from sea level up to 1200 m, however it thrives at low altitudes. Very often the neem tree is confused with the Persian lilac or chinaberry tree (Melia azedarach) a relative of neem which thrives a high altitudes.

The tree grows on a variety of soils, clayey or sandy, saline or alkaline, but will not grow in waterlogged soils. It does particularly well, however, on black cotton soils and deep, well drained soils with good subsurface water. Unlike most other multipurpose tree species, neem thrives on dry, stony, shallow soils and even on soils with hard calcareous or clay pans at a shallow depth. The tree improves soil fertility and water holding capacity because it has the unusual property of calcium mining, and can thereby neutralise acidic soils. Its extensive root system also has a rare physiological capacity to extract nutrients from highly leached sandy soils. Neem can grow on soils with a wide pH range. The optimum growth is at pH 6.2 to 7, but it can also grow well down to pH 5 and survive in soils between pH 3 and .

The Neem tree is best propagated from its seeds which will only germinate if less than three months old. The seeds need to be sprinkled daily while laying on a newspaper which is placed on plastic in the shade. The newspaper has to be renewed every second day. After a week the seed will crack and sprout ready to be planted in compost made of half soil and half cow manure. To propagate from a cutting, a small twig has to be stripped of its leaves and stuck into moist soil.

A lack of zinc or potassium drastically reduces growth. Trees affected by zinc deficiency show chlorosis of the leaf tips and leaf margins, their shoots exude much resin, and their older leaves fall off. Those with potassium deficiency show leaf tip and marginal chlorosisand die back (necrosis).

The tree starts bearing fruits after 3 to 5 years and is fully productive after 10 years. Under favourable conditions a tree can produce up to 30kg of seeds per year and 350 kg of leaves.

By and large, most neem trees are reputed to be remarkably pest free; however, some pests and diseases occasionally attack neem trees.

In some parts of Africa (mainly in the Lake Chad Basin), a scale insect (Aonidiella orientalis) has become a serious pest. This and other scale insects sometimes infest neem trees in central and south India. They feed on sap, and although they do little harm to mature trees, they may kill young ones. Now that one type has been detected in Africa, the impact could be severe.

Another insect pest ist the scale insect Pinnaspis strachani (very common in Asia, Africa, and Latin America). Even though neem timber is renowned for termite resistance, termites sometimes damage, or even kill, the living trees. However, they usually attack only sickly specimens, however.

In Nigeria, 14 insect species and one parasitic plant have been recorded as pests. Few of the attacks were serious, and the trees almost invariably recovered, although their growth and branching may have been affected.

Other Pests of neem tree

Distribution: Mbita point western Kenya
Biology: attacks seedling in the nursery at the larval stage. It is a gregarious mite
Nature of damage: defoliator
Management options: not mentioned

Distribution: Mombasa Kenya Biology: single females of this widespread coccidae are found on the upper surface of leaflets. Nature of damage: sapsuckers Management options: not mentioned

Despite the fact that the leaves contain fungicidal and antibacterial ingredients, certain microbes may attack different parts of the tree, including the following:

A canker disease that discolours the wood and seems to coincide with a sudden absorption of water after long droughts has also been observed. (OIA 1992)