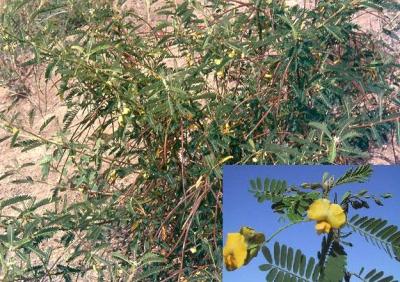 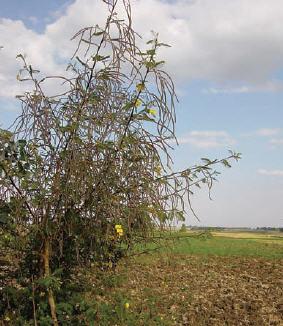 One of many useful African Sesbania more species of the type which survive water logging and fix nitrogen. Naturally distributed from Senegal to Somalia and South Africa. Cultivated throughout tropical Africa and Asia. It is found at the margin of fresh-water lakes and seasonal ponds. Some types tolerate acid and saline soil. Easy to establish even in waterlogged soil and dry eroded soil. In Ethiopia, it performs well in Moist and Wet Bereha, Kolla and Weyna Dega agroclimatic zones of Afar plains and in nearly all other regions, 300 - 2000 m. Widely used in western Kenya, it is distributed in the country as above;

This tree has a great potential for soil improvement on small farms due to nitrogen fixation and leaf mulch.

Altitude ranges from 100 to 2300 m, Mean annual temperatures (10 degrees on the lower side and 45 degrees on the upper side, Mean annual rainfall: 500-2000 mm, Soil type: It is capable of putting up with seasonal or permanently waterlogged soils as well as saline, acidic and alkaline soils. It is common along rivers and in Kenya, is found on the shores of fresh water lakes like Naivasha and Baringo and in seasonal swamps. It is widely cultivated in western Kenya and does well in agro-ecological zones I - IV

Propagation may be done by direct sowing at site or wilding. One of the major advantages of sesbania over other forage trees and shrubs is its fast early growth rate, which can be exploited by intercropping it with other slower establishing species for earlier yields. This tree species has been reported to attain a height of 4-5 m in 6 months. It also does well under repeated cuttings and coppices readily, with many branches arising from the main stem below cutting height. Cutting frequencies are generally 3-4 cuts per year, but up to 8 cuts are made in some areas. Yields also vary from 4 to 12 t/ha dry matter per year, depending on location of cultivation. Cutting height can also determine yield, with cutting heights of 50-76 cm being good for plant survival and productivity.

The species is a prolific seeder with a high germination rate. About 110'000 seed per kg. Germination about 80%.

Not necessary for fresh seed, soak stored seed in cold or tepid water for 24 hours before sowing.

Seed can be stored for long periods if kept in a cool and dry place, but best germination from fresh seed.

The species may harbour root-knot nematodes. The genetic diversity of Sesbania types allows for selection (e.g. for different uses, management, soil types). The leaf mulch and nitrogen-fixation features make this a tree of great potential for intercropping and thereby soil improvement on small farms.

It is susceptible to attacks by nematode, insect, fungi and virus. The leaf-eating beetle Mesoplatys ochroptera can completely defoliate this tree killing it. It can also be attacked by caterpillars, hymenoptera, and stem borers. Some potentially destructive root-knot nematodes have also been recorded as associated with this tree.
Due to their ability to harbor root knot nematodes, they should be avoided in combination with crops that are very sensitive to nematodes like banana & Irish potatoes.