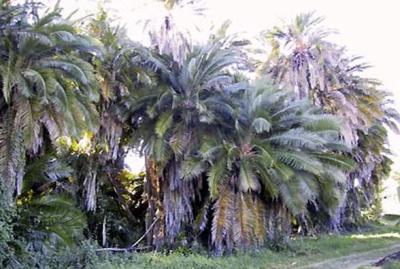 Found throughout tropical Africa. In high rainfall areas it grows on open rocky hillsides and cliffs, as well as in rain forests, but only along river-courses in dry country. Widely distributed in Kenya; cultivated in towns as ornamental. Often growing in dense clumps along watercourses and at forest edges.

P. reclinata is a clump-forming palm; it may be solitary but is usually found growing in colonies. It grows throughout tropical Africa in humid lowland woodlands, highland forests and on open, rocky hillsides. It occasionally grows in grasslands with a high water table. The leaf stems (rachis) are used to make traditional beds (Somali). It is over-exploited in northern and north-eastern Kenya for its use in handicrafts.

Altitude ranges between 0 and 2,600 m and occasionally higher. Mean annual rainfall is between 500 - 1 500 mm and is found in agro-ecological zones II - VII (only riverine in driest areas).

Seedlings and suckers are used for propagation. You may remove leaf stalks and root suckers for ornamentals. They may be established in mixed systems, amenity gardens, and along watercourses.

The tree may be destroyed by the larvae of the butterfly, Zophopetes dysmephilai, which feed on the leaves.