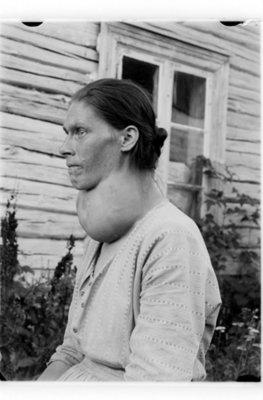 Goiter is an enlargement of the thyroid gland that is not associated with inflammation or cancer. The thyroid is a gland found below your adam's apple. When you have Goiter, the thyroid gland is seen as a swelling in the front part of your neck. Simple goitre is a painless condition, but if uncorrected it can lead to pressure on the trachea (windpipe), which may cause difficulty in breathing.
A simple goiter may be classified as an endemic (present continuously in a community) or sporadic Goiter. Endemic Goiters are usually caused by inadequate dietary intake of iodine in certain geographical areas with iodine-depleted soil, usually areas away from the sea coast.
In Iodine deficiency, insufficient T4 is produced to shut off the synthesis of thyroid-stimulating hormone. The constant release of the hormone by the pituitary gland causes the continual growth of the gland, eventually producing a greatly enlarged gland, or goitre. A fall in the metabolic rate and an increase in blood cholesterol are two other symptoms of thyroid hormone deficiency.
Sporadic Goiters are caused by taking of large amounts of certain foods or drugs and affect individuals. Goitrogenic foods are listed above. Drugs include include immunosuppressants, antiretrovirals, the heart drug amiodarone and the psychiatric drug lithium, among others.

What does the thyroid do?

A number of factors can cause your thyroid gland to enlarge. Among the most common are:

This is when your body's immune system attacks the thyroid gland causing it to become over stimulated and produce too much thyroid hormone (Graves' disease) or produce too little hormone (Hashimoto's disease).

This can either be a solitary nodule or Multinodular Goiter. Nodules are solid or fluid-filled lumps. Most do not lead to cancer.

A certain hormone produced during pregnancy (human chorionic gonadotropin-HCG) may cause your thyroid gland to enlarge slightly. This is particularly more noticeable during the early months of pregnancy.

This is usually seen as pain, warmth and swelling of the thyroid

Iodine, which is essential for the production of thyroid hormones, is found primarily in seawater and in the soil in coastal areas. People who live inland often do not get sufficient iodine in their diet and can develop Goiter when the thyroid enlarges in an effort to obtain more iodine. This deficiency can be made worse by taking goitrogenic foods and certain drugs. Goitrogenic foods contain substances that decrease thyroid hormone production.
Examples of these foods are:
An iodine-deficient diet poses a major threat to pregnant women and the foetus especially during the last two thirds of the pregnancy. Some of the documented harms caused by iodine deficiency include still birth,low birth weight, increased infant mortality, goitre, impaired mental function, and retarded development. Increasing the mothers intake of iodine prior to the 4th month or pregnancy , but preferably sooner can prevent these abnormalities.

Treatment with iodine can result in a slow reduction in the size of the thyroid gland, although surgical removal of part of the gland maybe required.
Most Goiters do not need any treatment. Visit your doctor to determine the best treatment for you.

If your goiter is caused by your diet, these suggestions can help you to get enough iodine.

*A three-ounce serving of meat is about the size of a deck of cards.

Reduce iodine consumption: Although it's uncommon, getting too much iodine sometimes leads to Goiter. If excess iodine is a problem, avoid salt fortified with iodine, shellfish, seaweed and iodine supplements.