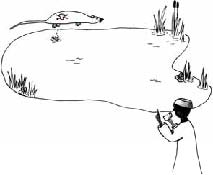 People drinking water from a source that may contain leptospira from the urine of rats run the risk of getting seriously ill.

Microbes and parasites can be transmitted from animals to humans and vice versa in many different ways:
1 Via direct contact between man and animal
2 Indirectly via food of animal origin
3 Indirectly via water and soil
4 Indirectly via insects, ticks, or rats/mice

Direct contact occurs when human skin comes into contact with the skin of the animal. This happens, for example, when you wash or milk an animal or when you vaccinate animals.
An example is ringworm, which is a fungus (not a worm) that can be present in the skin of humans and animals. If you lay your cheek against the cow when you are milking, it will give the fungus the opportunity to invade your skin via this direct contact. If infected, red circles caused by the ringworm will appear on the area of contact (skin of cheek) a few days later. See Table 1 for other examples of zoonoses that can be transmitted by direct contact.
Direct contact may also occur through touching dung or droppings of animals (faeces), as well as urine and saliva. If a dog has rabies, for example, the rabies-virus is present in the saliva of the dog. When a rabid dog bites or licks a person, this person gets infected with the virus in the saliva of the dog. See also chapter Rabies.
Another example of a zoonosis through direct contact is brucellosis, which can cause abortion* or stillbirth in animals. The microbes are often present in birth fluids, so a person coming into contact with it when assisting the animal, for instance, can get the microbes on their hands, face or mouth and can become infected with brucellosis. Pregnant women may abort when infected with brucellosis. Men infected with brucellosis can develop Malta fever. See also chapter Brucellosis.

Table 1: Some major zoonotic diseases and ways of transmission via direct contact.

Zoonoses that are transmitted via food of animal origin (milk, cheese, meat, eggs, honey) are called food-borne zoonoses. They can be transmitted to humans via consumption or by touching the meat, organs, milk, blood, wool or eggs of animals carrying the diseases. People working with animals to make these products have a greater risk of contracting a zoonosis.

Honey is good for energy and general resistance. If applied very thinly on wounds it can improve healing. Because of certain microbes (clostridia) sometimes present in honey, it is safest not to give it to babies under one year of age and very young children that are ill.

Another example of a food-borne disease is salmonellosis, caused by salmonella bacteria. These bacteria are found naturally in the intestines of some humans and some animals (especially poultry and swine). When animals, for example poultry, are slaughtered, the content of the intestines may contaminate the meat with salmonella microbes. Eggs from an infected chicken can also become contaminated. Humans eating these eggs or meat may become infected with salmonella and they get salmonellosis, which causes diarrhoea and can be fatal for young, old or weak people. Heating can kill the bacteria, so there is no danger of infection provided you cook meat well and boil eggs for more than five minutes or fry them properly (so that the egg white is really white). See Table 2 for other examples of zoonosis that can be spread via food.

Table 2: Some major food-borne zoonotic diseases and how they are transmitted.

Some zoonotic diseases can also be transmitted via food that is not of animal origin, such as vegetables and fruits that are eaten without prior cooking. It also means that drinking water can be a source of infection too.
Examples:

Indirect transmission via the environment

Here we talk about microbes or parasites that are not directly transmitted from animals to humans. Instead, they are transmitted from animals (or animal products) first to water, soil, household equipment or garden tools, and thence to humans.
For example, those who work on the land can be contaminated with residues of animal excrement that contain parasites or pathogenic microbes. To prevent this, it is essential that you wash your hands with soap after working on the land, before preparing food and before eating. Likewise, it is necessary to fry or cook vegetables before eating them.
Another example is raw chicken meat that may contain Salmonella or Campylobacter microbes. People are exposed to the risk of becoming infected when they eat cooked food that has been cut or prepared on the same plate used for raw chicken, which could be infected.
Examples of microbes that can be in dirty soil are: larva migrans, listeria and toxoplasma (see that chapter). Leptospira can be found in the urine of rodents. Dirty wells with dead rats in it are notorious for causing leptospirosis (see that chapter). Examples of other waterborne zoonoses are explained in the text in Box 3.

Indirect transmission via insects, ticks or other creatures

In this case, a so-called vector is needed for transmission, for example ticks and mosquitoes as shown in Table 3. For example, when a tsetse fly bites an animal carrying sleeping sickness microbes, these microbes are transmitted to the fly. Then, when the fly bites a human the microbes enter the bloodstream of this human causing sleeping sickness.

Table 3: Some major zoonotic diseases and transmission via insects, ticks and other animals

A vector not mentioned in Table 3 is the tick. Ticks are small insects with an oval body, a head and eight legs. There are around 800 sorts of ticks which all feed on blood. Toxins or microbes in the tick's saliva are transmitted through the bite into the human or animal blood stream and can cause disease.

Examples of tick-borne zoonoses are Lyme disease (found in Europe and North America), tick-bite fever (has different names in different parts of the world) Q-fever and Crimean-Congo hemorrhagic fever (mainly in Africa).

Ticks not only transmit zoonotic diseases they also transmit other animal diseases such as East Coast fever, babesiosis and "heart water disease" in cattle, which cause major problems and economic losses.

Some people run more risk of becoming infected with zoonoses than others. They can be divided into three main groups as follows:
1 Professional contacts: farmers, butchers, veterinarians or others whose work brings them into intensive contact with animals or animal- products.
2 Young children, elderly, and HIV infected persons, more vulnerable due to a less effective immune system.
3 Pregnant women.
Please see chapter on "Prevention at farm and community level" on how these persons can protect themselves against zoonoses.

If you work with animals or animal products (professional contacts) you should be aware of the specific zoonotic risks you may encounter while you work. And it is important if you get ill that you tell the medical personnel in the hospital that you work with animals or animal products. You could take this book with you to make clear that some diseases can be transmitted from carcasses to butchers, for example. Examples of people whose occupations place them at greater risk are:
Examples of specific zoonotic risks for these professional contacts are: anthrax, brucellosis, tetanus and rabies.

People with a weak immune system

Everyone should be aware of the vulnerability of these persons whose immune system is not capable of fighting diseases. They include:
These people and their carers need to be aware of the risk of getting ill from many diseases. Salmonellosis is one example of a disease that gives some people diarrhoea or no problems at all, but can kill people with a weakened immune system.

Risk factors are those factors that increase the risk of getting infected by a zoonosis. Apart from occupations (see above), these can be habits, things we do, environmental features and the like.
Examples of risk factors are:

Hygiene literally means "keeping yourself clean": by washing hands, using latrines for the purpose of urinating or defecating, and keeping the kitchen clean. Many diseases can be transmitted: from (unwashed) hands to other persons or to the mouth; or from contaminated meat to the mouth. Examples are echinococcosis, salmonellosis and cysticercosis. Some diseases have been virtually eradicated from so-called western countries, because after these countries began building latrines and providing clean water.

Human behaviour such as travelling, eating habits or hunting

People who travel are confronted with all kinds of diseases that are not present in their home surroundings, therefore their immune systems are not prepared to deal with these diseases (see also the text in Box 8 about vaccination in Section 5.2). Eating habits are risk factors as well: the risk of getting salmonellosis from eating raw eggs is greater than from eating well boiled eggs. Hunting, furthermore, brings one into contact with wild animals that can carry many different diseases and parasites.

Through meat inspection the meat from healthy animals can be differentiated from the meat of sick animals. Detectable diseases in meat include: echinococcosis, cysticercosis and bovine tuberculosis. Some diseases like toxoplasmosis in pig meat, for example, cannot be detected in meat, likewise salmonellosis in pig or poultry meat. Therefore, the health of animals should be checked when still alive. When animals are slaughtered, it is very important that this is done as hygienically as possible and in a cool place as well. If you keep everything clean, the healthy meat can stay uninfected. Cool places are important because bacteria grow fast in temperatures above 10o C.

An example of a disease that can be transmitted via water is leptospirosis. The water of a well can become infected if it is not protected from livestock that could drink or urinate into it or if small (infected) animals are able to fall into the well and cannot get out again. Many microbes thrive in stagnant water or moist environments.

Stray dogs carry a risk of rabies. Markets where lots of live and dead birds are sold side by side are places exposed to the risk of avian influenza. The dead birds could have died from avian influenza and the microbes can then spread to the living birds. Fruit orchards where bats live can harbour the Nipah* virus. Poverty and lack of education are risk factors as well Many people do not know that hand washing helps to prevent diarrhoeal diseases. And, persons with little money may choose to buy cheaper (but less well inspected) meat.