Introduction - What are zoonoses?

Introduction - What are zoonoses? 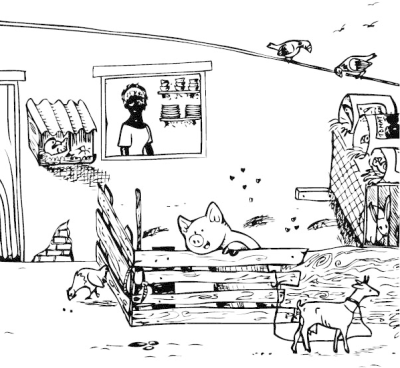 Backyard stable in the city. Small houses, stables and cage situated together.

A herd or flock will be of benefit to its owners if it is healthy, because healthy animals grow faster and produce more food and more draught power. Some animal diseases and parasites may not only make the animals ill, they can be a threat to humans as well. These diseases are called zoonotic diseases or zoonoses.
When animals fall ill, the owner has a problem because many owners depend on their animals for income. If a sick donkey cannot pull the cart to bring fruits to the market, there will be no income (for the family). If sick chickens stop laying eggs, there will be no eggs to sell. And without any money, how can sick animals be treated or replaced if they die?

Some animal diseases can spread to other animals making the problems even bigger. Worse still, the disease can also spread to humans. In recent years, much publicity has been focused on mad cow disease (BSE) and avian influenza (AI). While these zoonoses are described as serious threats to human health, many other zoonoses cause more deaths among people (especially in developing countries) and get far less attention. Rabies, for example, kills around 55,000 people worldwide each year, while in comparison BSE killed (only) 139 people between 1996 and 2002. Human deaths due to avian influenza have amounted to no more than 200 worldwide (Source: WHO Fact Sheets, 2007). Many of these zoonoses can be entirely prevented (though not easily!).

The definition we use here for zoonoses (or zoonotic diseases) is as follows:
Infectious diseases are caused by pathogenic microbes (viruses, bacteria) or by parasites (worms, protozoans). The microbe or parasite infects the animal or human and causes disease.
Microbes and parasites can be found in different places in the body, depending on the disease. Some live in the intestines and others in organs. Microbes and parasites can also be present in the urine, blood, faeces and saliva. For instance, when you cough, small droplets of saliva can be projected through the air to anyone in the immediate vicinity, and if you are ill, the microbes in your saliva can infect people. Diseases that cause diarrhoea are another example.
An animal may be a carrier of a specific microbe or parasite. This means it carries the microbe or parasite but is not ill. Still, the animal can spread microbes like salmonella, for instance, via its excreta. Infectious diseases caused by zoonoses are specific: they are not restricted to one animal species or solely to humans, and can cross over from animals to humans and vice versa (action known as transmission). More information about the different routes by which zoonoses can be transmitted from animals to humans can be found in the chapter "How people get infected: transmission and risk factors"
Some zoonoses cause no signs of disease in animals. An example is porcine cysticercosis (see Section 6.6). Cysticercosis is caused by the young form (larva) of the pig tapeworm. In humans, cysticercosis may cause epileptic fits or large nodules under the skin, while the infected pig will show no signs or symptoms of the disease, except for some vesicles on the tongue. Some well-known diseases are commonly thought to be zoonotic, whereas they are not. For example, classical (CSF) and African swine fever (ASF) do NOT cause illness in humans. The same goes for Foot and Mouth Disease (FMD).

Why is knowledge of zoonoses important?

Knowledge of zoonoses is of importance to people who live in close contact with animals and to those who work with animals or animal products. Most zoonoses can be prevented by simple measures like vaccination of animals or by proper heating of food, for example. Prevention of zoonoses will improve the health of animals, the income of their owners, and the health of people.
Most zoonotic diseases occur in developing countries and in poor rural communities. Prevention of zoonoses in animals and humans can be a tool in the fight against poverty!