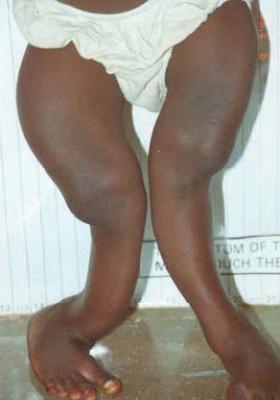 Rickets is the softening of the bones in children, potentially leading to fractures and deformity. Rickets is among the most frequent childhood diseases in many developing countries. The predominant cause is Vitamin D deficiency, but lack of adequate calcium in the diet may also lead to rickets. Although it can occur in adults, the majority of cases occur in children suffering from severe malnutrition, usually resulting from famine or starvation during the early stages of childhood. Infants who are born prematurely or who have dark skin, and babies who are breast-fed by poorly nourished mothers or who are unexposed to the sun, are all at higher risk for developing rickets.

Osteomalacia is the term used to describe a similar condition occurring in adults, generally due to a deficiency of Vitamin D. The origin of the word "rickets" is unknown. The Greek-derived word "rachitis" (meaning "inflammation of the spine") was later adapted as the scientific term for rickets, due chiefly to the words' similarity in sound.

The principal function of Vitamin D is to maintain serum calcium and phosphorus concentration within the range that supports neuromuscular function, bone calcification and other cellular processes.Vitamin D is also capable of influencing differentiation in some cancer cells, such as skin, bone, and breast cancer cells. Indeed, adequate Vitamin D status hs been linked to reduced risk of developing breast,colon and prostrate cancers.

Causes of Rickets and Osteomalacia

Without adequate calcium and phosphorus in the blood available for deposition in the bone,  the skeleton fails to mineralize properly and bones weaken and bow under pressure. When these effects occur in a child, the disease is called rickets.

Symptoms of Rickets and Osteomalacia

Problems such as spinal deformities, bow legs, knock-knees, a deformed chest, changes in the skull causing a distinctive "square headed" appearance may persist into adult life if not treated

Calcium and phosphorus consumption are also important for bone formation in childhood. Breast milk is a good source of calcium, as are most commercially available formulas.
Recommended daily intake of calcium is as follows (serving sizes vary with age):

The majority of non-severe cases of both rickets and osteomalacia respond well to treatment and improvement is seen within 3-6 months.
With adequate treatment and follow up, most individuals lead normal lives.
The main problem encountered is reoccurrence mainly due to poor diet issues.