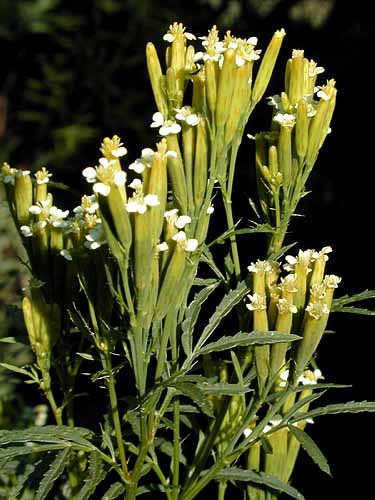 Mexican marigold (Tagetes minuta) has been successfully used in bio-fumigation against root-knot nematodes by a Kenyan farmer.

Bio-fumigation can be used against the following pests (clicking on underlined pests takes you to pests' page):Root-knot-nematodes, Bacterial wilt

Bio-fumigation is based on incorporating soil amendment (fresh plant mass, manure) into the soil, which will release chemical substances, known as isothiocyanates (ITC's), able to suppress soil-borne pests and diseases, plus a soil heater to enhance biological activities.

Plants from Cruciferae family (cabbage, radish, cauliflower etc.) release large amount of these toxic to soil-borne pests and diseases substances - in the soil and are considered the best material for bio-fumigation.

Different mustards (e.g. Brassica juncea var integrifolia or Brassica juncea var juncea) should be used as intercrop on infested fields. As soon as mustards are flowering they are mulched and incorporated into the soil. While incorporated plant parts are decomposing in a moist soil, nematicidal compounds of this decomposing process do kill nematodes. Two weeks after incorporating plant material into the soil a new crop can be planted or sown (it takes about 2 weeks for the plant material to decompose and stop releasing phytotoxic substances = chemicals poisonous to plants). (Eric Wyss, Personal communication)

Mexican marigold, also known as Tagetes, has been successfully used in the control of root-knot nematode in roses by a Kenyan Farmer (Report on ToT for Alternatives to the Use of Methyl Bromide for Soil Fumigation in Brazil and Kenya).

It is recommended to alternate the use of agricultural residues with green manure, especially from brassicae, using 5-8 kg square-metres of green matter, although combinations of legumes and grass can be applied. In the case of the use of green manure cultivated in the same field, fast growing plants should be used to be incorporated at least 30 days after having been planted, to avoid the increase of pathogen populations. Planting mustard after bio-fumigation can serve as bio-indicators of possible phytotoxicity, because the germination of their seeds is sensitive to phytotoxic substances. At the same time they are very sensitive to nematodes and permit the detection of areas in the crop where biofumigation is not effective. They act like trap plants, and like bio-fumigants when incorporated into the soil.

In Spain, successful application of bio-fumigation was achieved in strawberries, peppers, cucurbits, tomato, brassicae, cut flowers, citrus and banana. Bio-fumigation has also been recently applied to Swiss chard and carrot crops. The most utilized biofumigants have been goat, sheep and cow manure, and residues from rice, mushroom, brassicae and gardens.

The effectiveness of bio-fumigation in controlling nematodes, fungi, insects, bacteria, and weeds is nearly the same as with the use of conventional pesticides. Bio-fumigation may also regulate viral problems by controlling vector organisms.

(FAO, Global report on validated alternatives to the use of methyl bromide for soil fumigation)

From 1999 research on using bio-fumigation for control of bacterial wilt has been carried out in Australia and the Philippines by the Australian Centre for International Agricultural Research (ACIAR). The Centre with collaborators have been working to identify suitable brassicas for tropical environments and to evaluate them in the field, initially on experimental farms and more recently on commercial farms and smallholder farmers fields. There are many varieties and they differ enourmously in the level of disease-suppressing chemicals they produce.

In recent years Australian banana growers have started growing brassica green manures for nematode control, and in the US farmers are using mustard green manure crops to replace synthetic fumigation for potatoes with huge savings on costs.

Growing of radish, mustard and broccoli have reduced bacterial wilt significantly (50-60%) in most of the experiments, though researchers believe the treatment is more effective on sandy soil than on heavy clay soil.

How do we get the useful chemicals out of the plant tissue?

The most effective according to researchers is to disrupt the plant cells, by freezing or complete maceration. This will give the best bio-fumigation effect, but equipment to do this is not always available. A field rotavator used for chopping the plant material and incorporating it into the soil is second best. The rotavation effect can be duplicated by hand chopping the plant material before digging it into the soil but this is very labour demanding.

The project also discovered that other large incorporations of green manure will suppress bacterial wilt. An example is mentioned of sweet potato leaves giving good control as well.
In Northern Australia, results in some field trials have been excellent. A plot with a high level infection of bacterial wilt was planted with tomatoes. An untreated block yielded less than 2 tons of tomatoes/ha, while the area where brassica green manure had been applied yielded up to 20 tons/ha of tomatoes and had correspondingly lower levels of bacterial wilt.