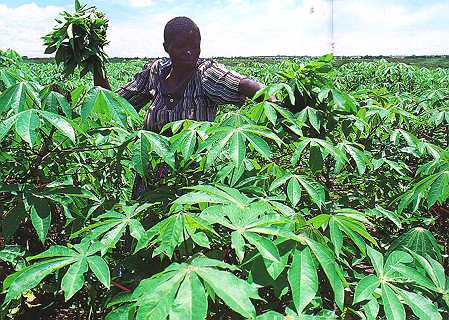 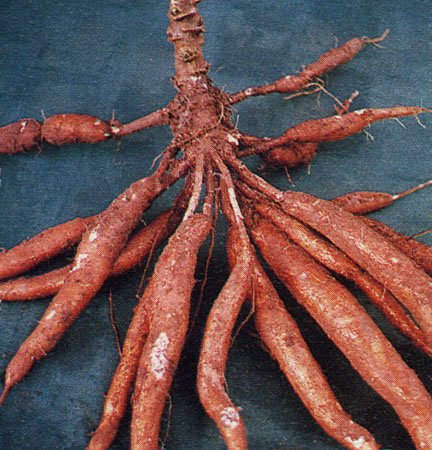 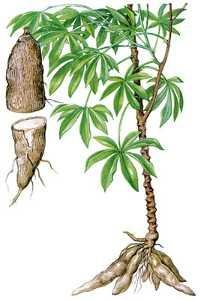 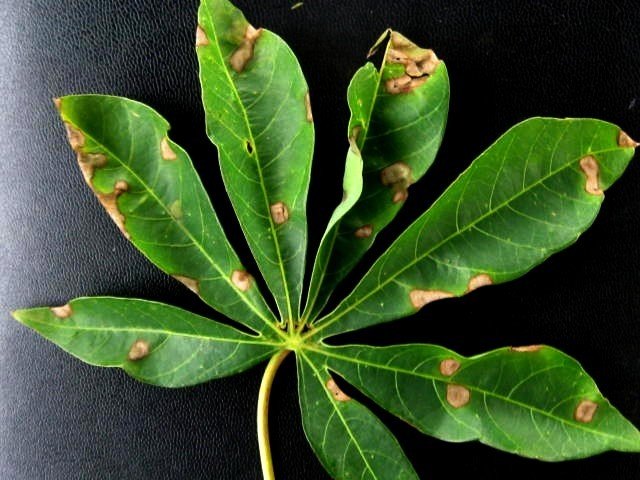 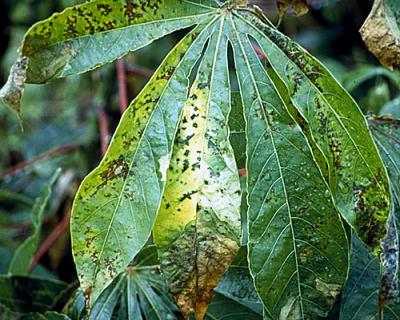 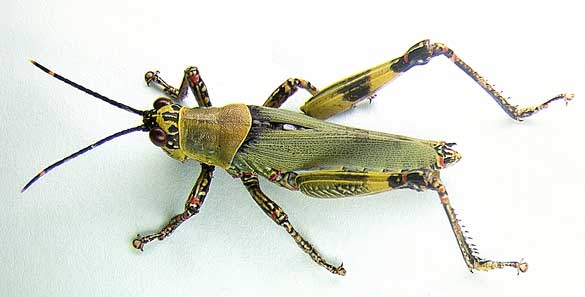 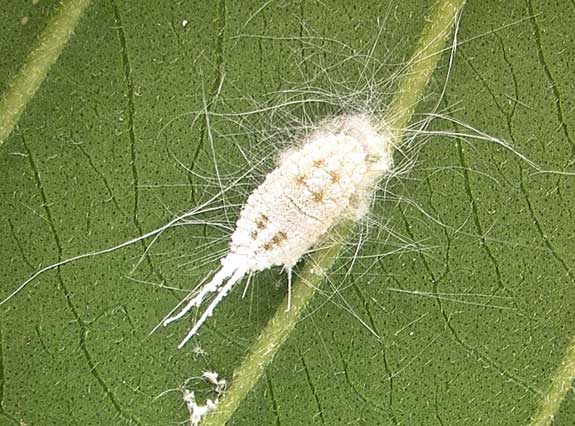 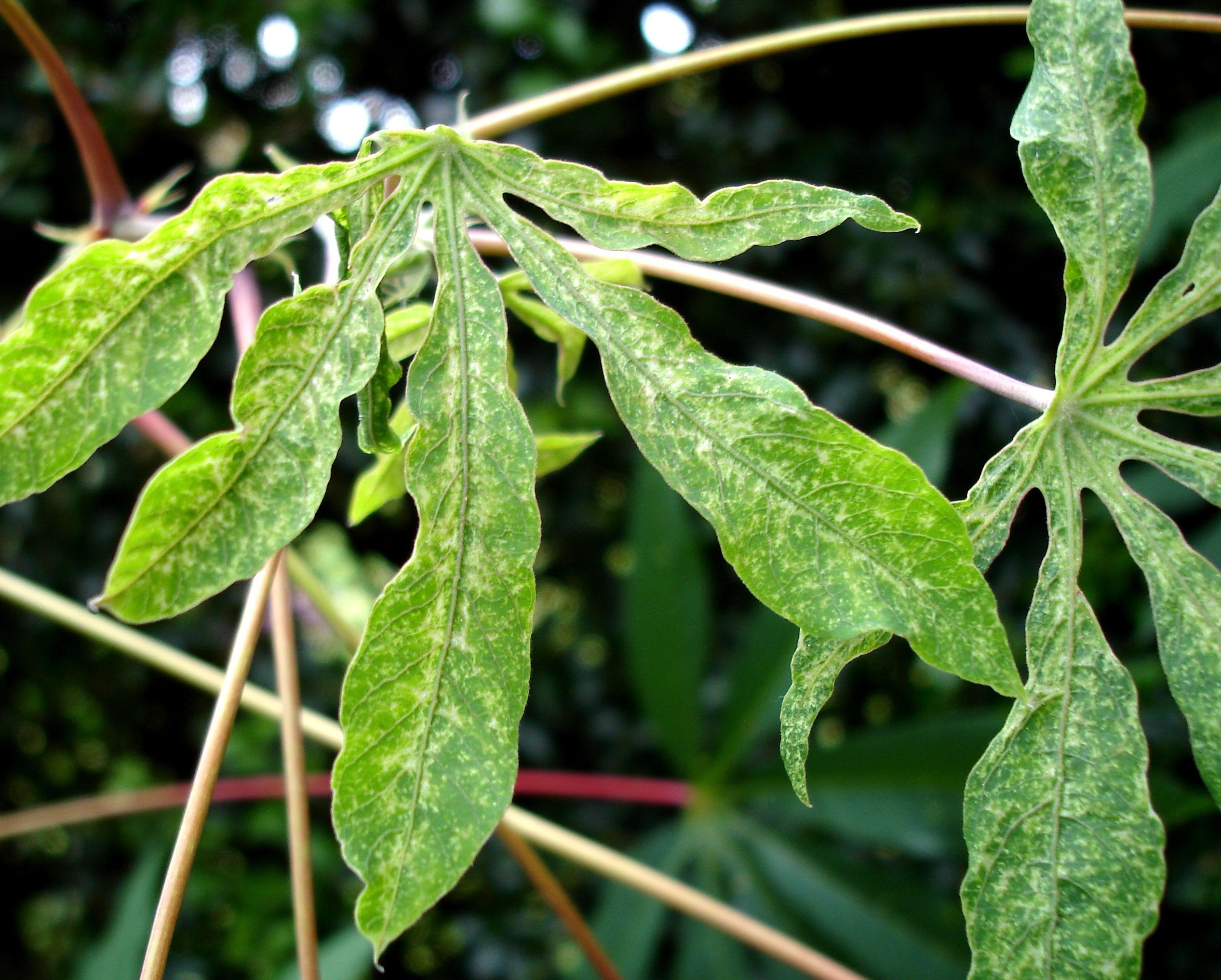 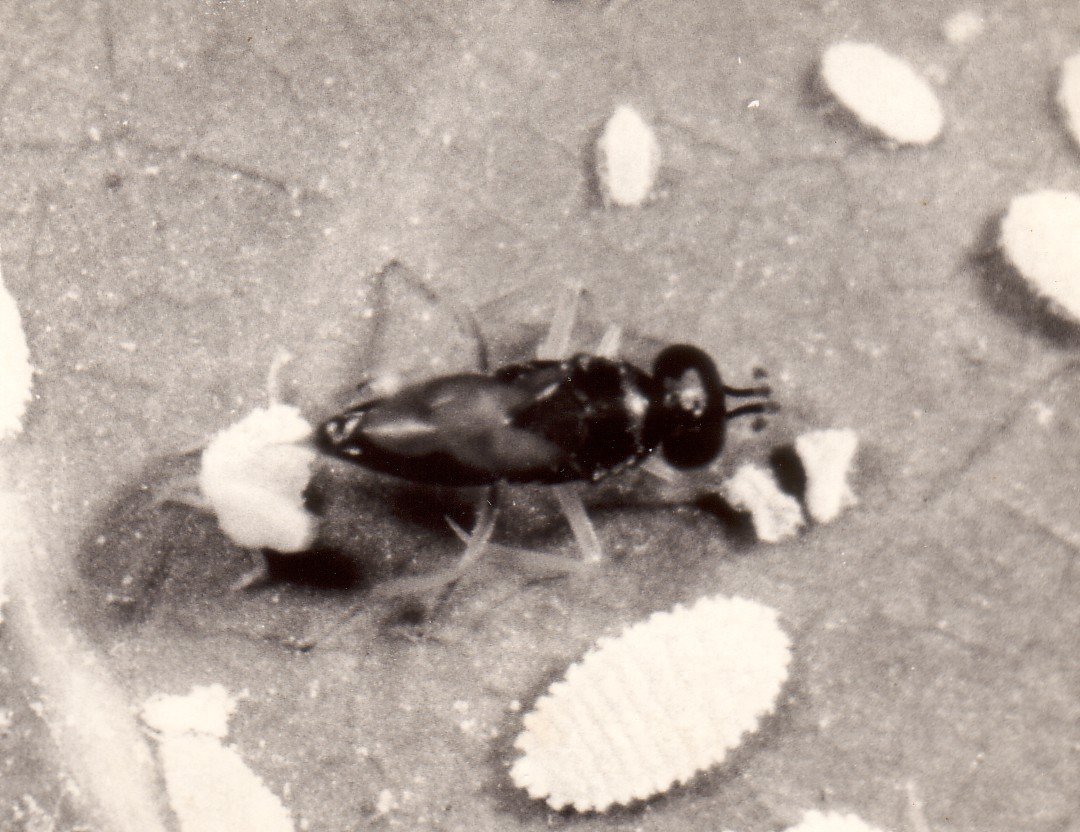 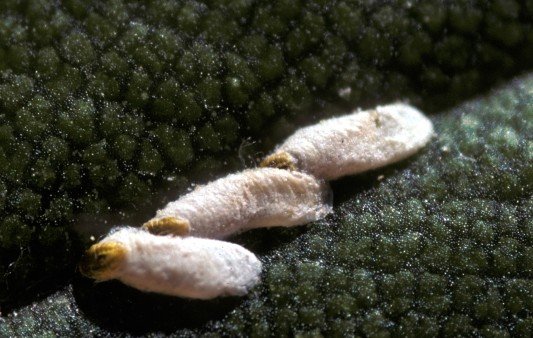 Scale insect. This is not the cassava scale, but an armored scale (related species) 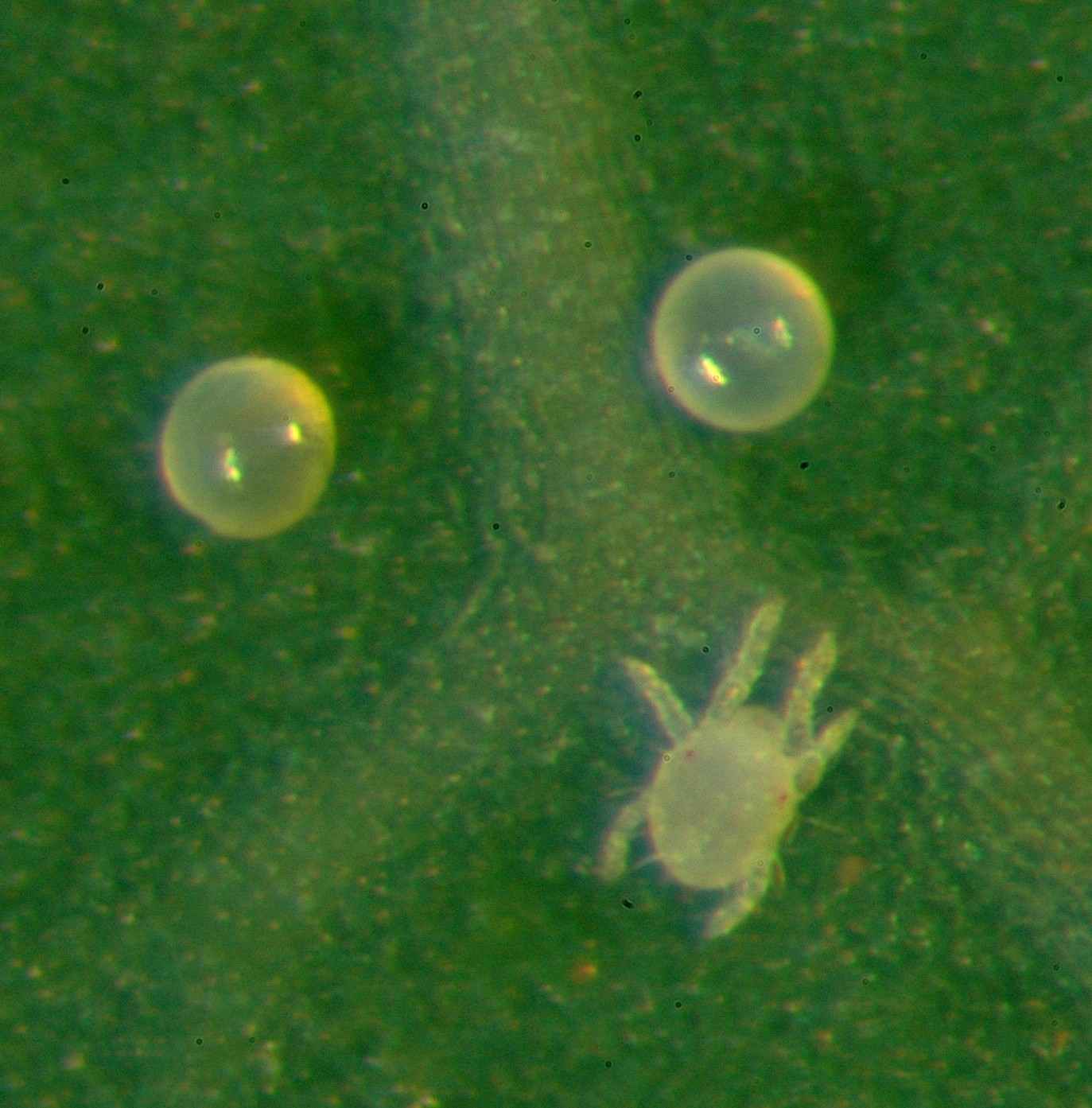 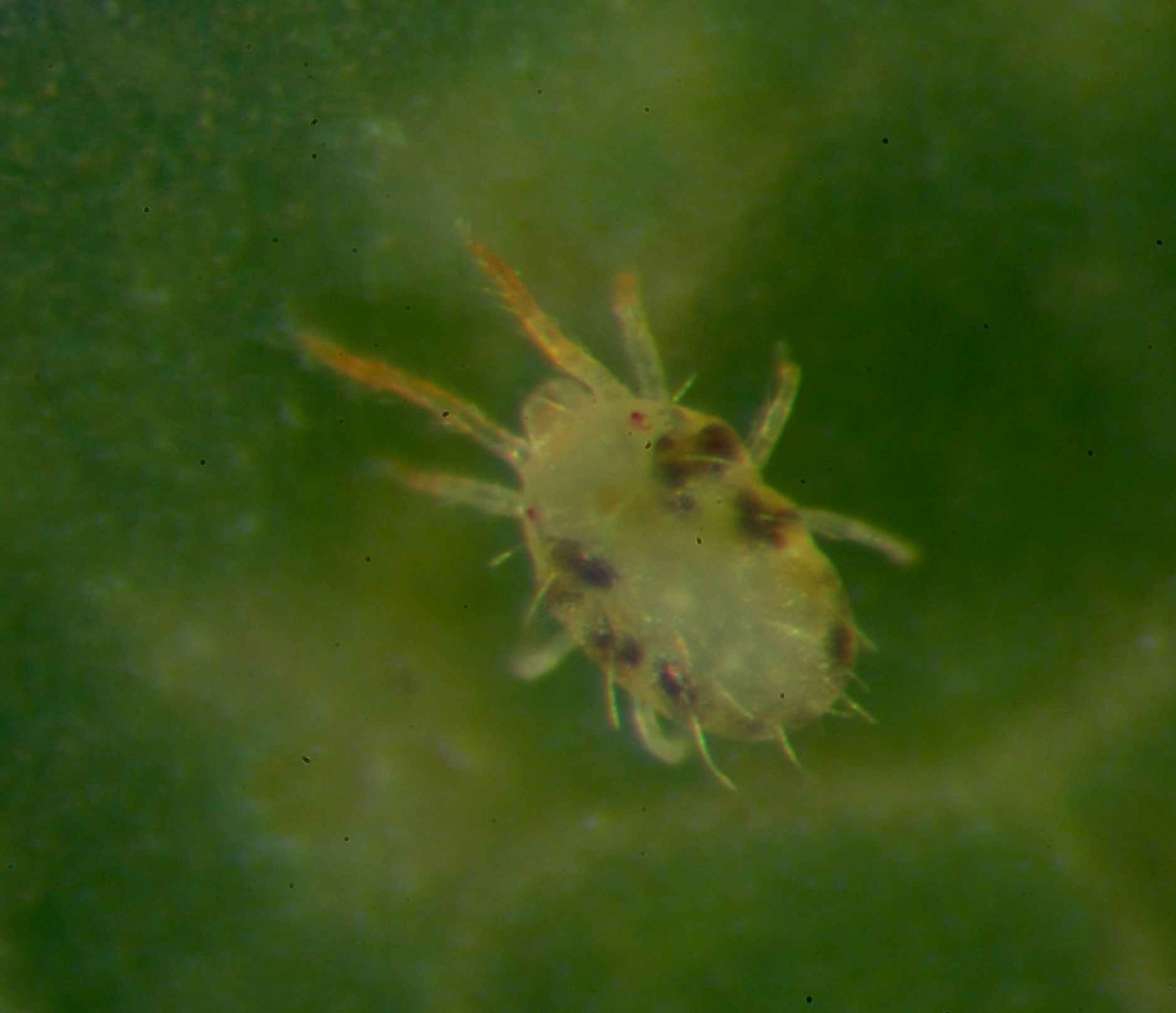 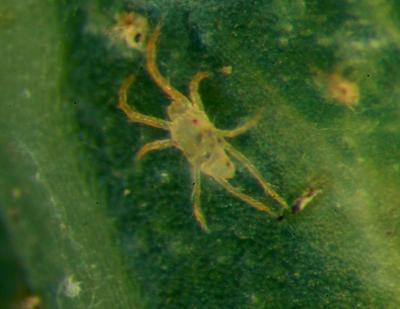 Cassava typically grows as a shrub. Cassava is native of Latin America and was introduced to the African continent by Portuguese traders in the late 16th century.

Cassava is grown on an estimated 80 million hectares in 34 African countries. It is an important crop in subsistence farming, as it requires few production skills or inputs. It is drought tolerant and produces reasonable yields under adverse conditions. Most important is its ability to remain in the soil as a famine reserve. Other factors that make cassava popular with small-scale farmers, particularly in Africa, are that it requires little labour in its production and there are no labour peaks because the necessary operations in its production can be spread throughout the year, and its yields fluctuate less than those of cereals.

The storage root (some people refer to it as "tuber") is a major source of energy and the leaves, which contain a high level of vitamin A and up to 17% protein, are often used as green vegetables. Its limitations are its poor nutritive value (mainly carbohydrates) and its cyanogenic glucoside content (HCN) that can lead to poisoning unless precautions (proper peeling/soaking in water/fermenting/drying/cooking) are taken during preparation of the tubers. The latter is only applicable to bitter cassava varieties. Sweet varieties can even be eaten raw and fresh as they have very low content of HCN.

The main diseases affecting cassava are African cassava mosaic virus (ACMV), cassava bacterial blight, cassava anthracnose, and root rot. Pests and diseases, in combination with poor agronomic practices cause high yield losses in Africa. While biological and chemical control practices are available for other pests and diseases attacking cassava, ACMV is difficult to control. In severe cases, plants become stunted. In fact, this disease can cause up to 60% yield loss, and no biological or chemical control is now available to farmers. Given the vegetative propagation method used for cassava, availability of clean planting material for propagation is a major constraint, since white flies and infested planting material transmit the disease.

While cassava production demands few external inputs, labour and planting material are main costs of production. As a root crop, cassava requires a lot of labour to harvest. The production of cassava is dependent on a supply of good quality stem cuttings. The multiplication rate of these vegetative planting materials is very low, compared to grain crops, which are propagated by true seeds. Post harvest deterioration of cassava is a major constraint. Cassava stem cuttings are bulky and highly perishable, drying up within a few days. Consequently, roots must be processed into a storable form soon after harvest. Farmers recognise post harvest loss as a major risk factor in cassava production. Nevertheless, the rapid post harvest perishability might lead to comparative disadvantages for small-scale producers linked to small-scale processing units.

Furthermore, many cassava varieties contain cyanogenic glucosides, and inadequate processing can lead to high toxicity. Various processing methods, such as grating, sun drying, and fermenting, are used to reduce the cyanide content.

A number of both local and improved varieties exist in Kenya:

For more information on these varieties please contact the Kenya Agriculture and Livestock Research Organization (KALRO).

Propagation from storage roots is impossible, as the roots have no buds. Cassava is propagated through cuttings. The most suitable cuttings are 20-30 cm long and 20-25 mm in diameter (with 5-8 nodes), preferably from the middle browned-skinned portion of the stems of plants 8-14 months old. Cuttings from older, more mature parts of the stem give better yield than cuttings from younger parts, and long cuttings give higher yields than short cuttings. Select cuttings from healthy plants. Cuttings slightly infested with pests can be treated by immersion in heated water (mixing equal volumes of boiling and cold water) for 5-10 minutes just before planting.

The interval between cutting stems and planting should be as short as possible (not more than a couple of days). Cassava cuttings may be planted vertically, at an angle, or horizontally. The drier the soil the bigger the part of the stem placed in the soil. Under very dry conditions, plant cuttings at an angle and cover the larger part with soil. Vertical planting is best in sandy soils, as the roots develop deeper in the soil. Horizontal planting leads to a large number of thin stems, which may cause lodging. Moreover, the roots develop more closely to the surface and are more likely to be exposed and attacked by rodents and birds. Do not plant cuttings upside down, as this drastically reduces yield.

The spacing between plants will depend on whether cassava is grown as a sole crop or with other crops (intercropping). If cassava is being grown alone, plants should be planted 1 meter apart from each other. This means that 10.000 cuttings are required for 1 ha (4000 cuttings per acre). If cassava is being grown as an intercrop, the branching habit of both the cassava and the other crops should be considered, making sure there is enough space for the plants.

The best land for planting cassava is flat or gently sloping land. Steep slopes are easily eroded. Valleys and depression areas that usually get waterlogged are not very suitable and cassava roots do not develop well. Before planting get to know the history of the land (previous crops, types of weeds, diseases and pests).

Soil preparation varies from practically zero under shifting cultivation to ploughing, harrowing and possible ridging in more intensive cropping systems. Planting on mounds and ridges is recommended, especially for areas with rainfall of more than 1200 mm per year or in areas where soils get waterlogged (e.g. valleys and depressions). Ridging may not give higher yield, but harvesting is easier and soil erosion may be reduced, especially by contoured ridges. In sandy soils, minimum tillage and planting cassava on the flat are appropriate. Plant at the beginning of the rainy season.

Weeding is necessary every 3-4 weeks until 2-3 months after planting. Afterwards the canopy may cover the soil and weeding is less necessary. Although cassava grows rather well on poor soils, it requires large amount of nutrients to produce high yields. To maintain high yields, it is necessary to maintain the fertility of the soil. Phosphorous is important for root development. Symptoms of phosphorous deficiency are stunted growth and violet or purple discolouration of the leaves. In the absence of good compost, rock phosphate can be applied if needed. Potassium is also needed by cassava and can be applied in the form of compost or wood ashes. Potassium deficiency symptoms are: stunted growth, dark leaf colour which gradually becomes paler, dry brown spots on tips and margins of the leaves and "burnt" edges of leaves.

Fertilisers and manures are usually not used by small-scale cassava growers in most African countries because, in many cases, they cannot afford such additional inputs. However, it is important to provide good growing conditions for the plants, as healthy plants are able to withstand some damage by pests and diseases. In general, cassava responds well to farmyard manure. Manure can be applied at land preparation to increase soil nutrients, to improve the soil structure, and to improve the ability of the soil to hold water.

Mulching cassava, especially after planting, is helpful when growing cassava in dry areas or on slopes.

There is a wide variety of cropping patterns and rotations with cassava. Though rotation with other crops is preferable, cassava is sometimes grown continuously on the same land, especially in dry areas not suitable for other crops. When grown in bush-fallow systems, cassava is usually planted at the end of the rotation cycle, as it still produces relatively well at lower fertility levels and also allows a smooth transition to the fallow.

Sow 1 row of Canavalia or Crotalaria between rows of cassava immediately after planting cassava. Let these grow until harvest. Plough after harvest to incorporate crop residues into the soil.

Harvesting is done either piece-meal or by uprooting whole plants. Young plants are usually harvested piece-meal, while old plants are more commonly uprooted to prevent the storage roots becoming very fibrous. As cassava roots do not keep fresh more than 2-3 days after harvesting, not all plants are harvested at once, but rather harvesting as the roots are consumed. When cassava is grown for urban markets they are harvested in bulk. Cassava is usually harvested 9-12 months after planting. It is sometimes harvested earlier if needed for food. Storage roots become too woody if harvesting is delayed. Early maturing varieties are ready for harvesting at 6 months while late maturing varieties are ready 12 months after planting.

Cassava does not store well when fresh and therefore has to be peeled, chopped and dried in the sun. It can then be stored in the form of chips or flour under dry conditions.

Manual from IITA  Starting a cassava farm  Of the world production of cassava, 65% is used directly for human consumption, 20% for animal feed and the remaining 15% for starch and industrial uses (alcohol production). In Africa, stems are often used as firewood.

In equatorial areas, cassava can be grown up to 1500 m altitude. The optimum temperature range is 20-30deg. Specific cultivars are necessary for successful cultivation at an average temperature of 20deg. Cassava is grown in regions with 500-6000 mm of rainfall per year. Optimum annual rainfall is 1000-1500 mm, without distinct dry periods. Once established, cassava can resist severe drought. With prolonged periods of drought, cassava plants shed their leaves but resume growth after the rains start, making it a suitable crop in areas with uncertain rainfall distribution. Because of its drought resistance, in many regions cassava is planted as a reserve crop against famine in dry years. Good drainage is essential for cassava; the crop does not tolerate water logging. High irradiance is preferred.

Best growth and yield are obtained on fertile sandy loams. Cassava is able to produce reasonable yields on severely depleted or even eroded soils where other crops fail. Gravelly or stony soils cause problems with root penetration and are unsuitable. Also heavy clay or other poorly drained soils are not suitable.

Cassava growth and yield are reduced drastically on saline soils and on alkaline soils with a pH above 8.0. The optimum pH is between 5.5 and 7.5, but cultivars are available that tolerate a pH as low as 4.6 or as high as 8.0. Reasonably salt-tolerant cultivars have also been selected. Very fertile soils encourage excessive foliage growth at the expense of storage roots.

Furthermore, many cassava varieties contain cyanogenic glucosides, and inadequate processing can lead to high toxicity. Various processing methods, such as grating, sun drying, and fermenting, are used to reduce the cyanide content.