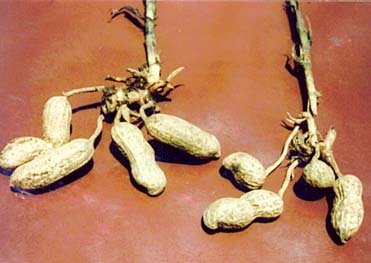 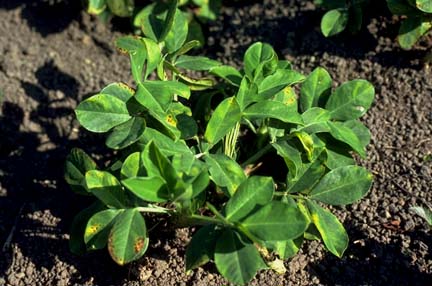 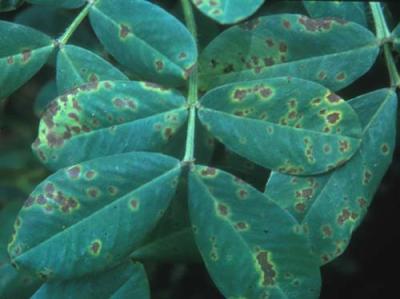 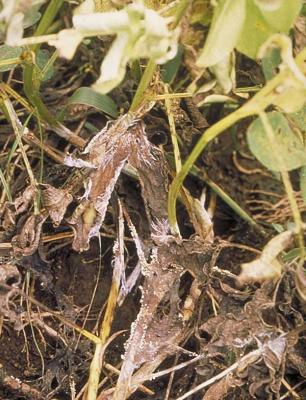 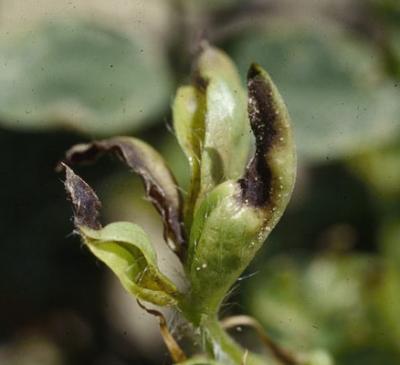 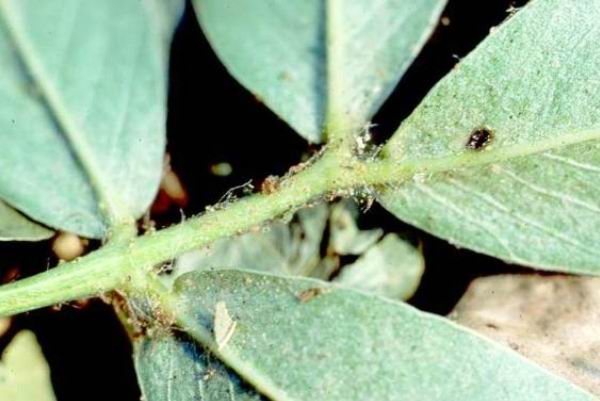 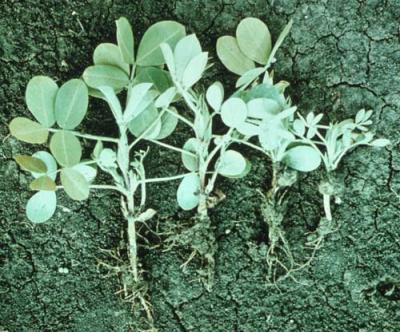 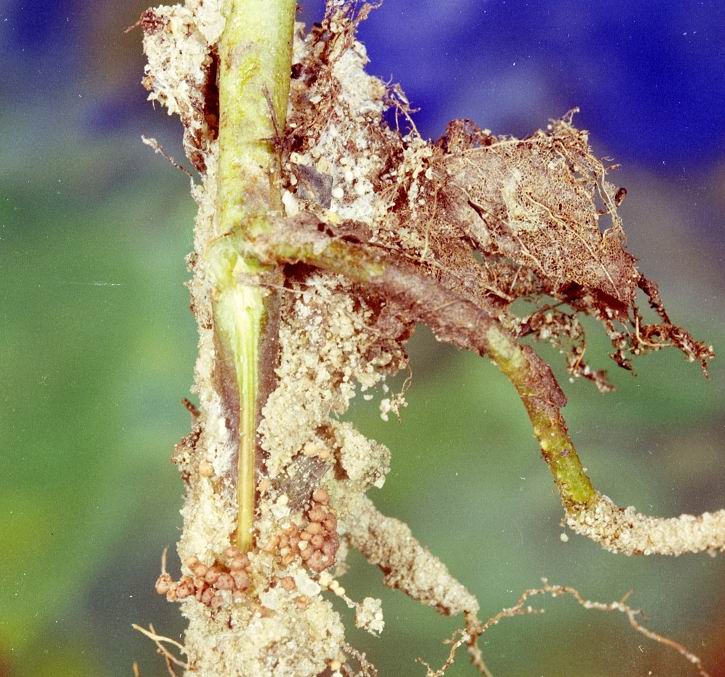 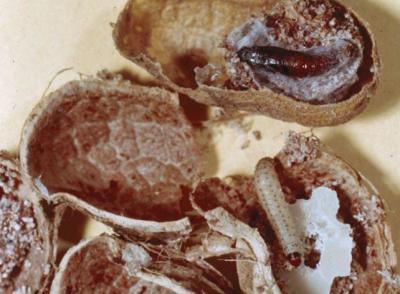 Dried currant moth (Cadra cautella) - The larvae range from 1.5 mm to 1.5 cm (15 mm) in length and are light brown in colour with dark brown spots on the skin (cuticle). 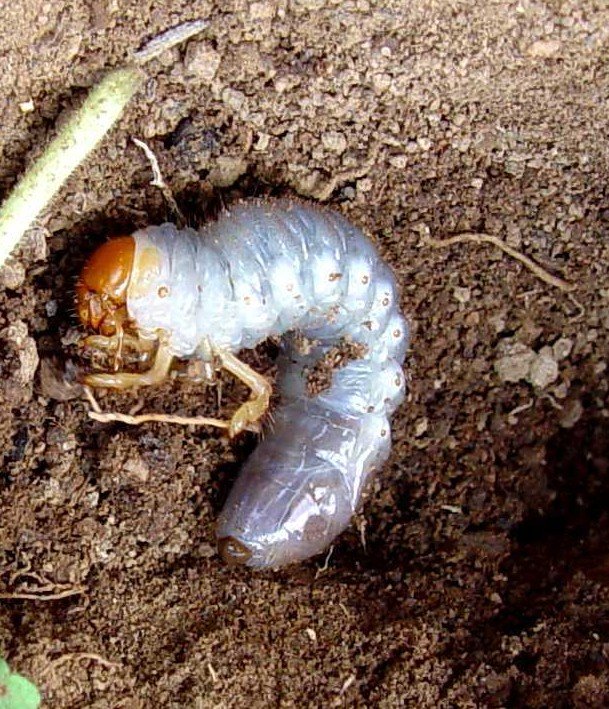 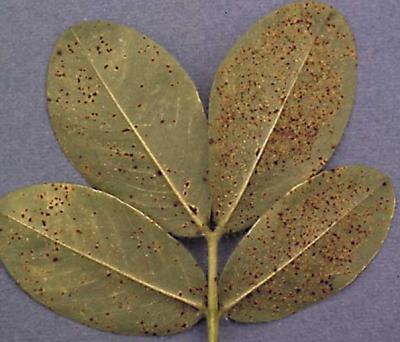 Groundnuts originated in South America from southern Bolivia to north-western Argentina. The Portuguese apparently took them from Brazil to West Africa and then to south-western India in the 16th century. Africa is now regarded as a secondary centre of diversity. Groundnuts are now grown in most tropical, subtropical and temperate countries between 40degN and 40degS latitude, especially in Africa, Asia, North and South America.

Groundnuts are a small erect or trailing herbaceous legume, about 15 to 60 cm high. The fruit is a pod with one to five seeds that develops underground within a needle-like structure called a peg. The seeds are rich in oil (38-50%), protein, calcium, potassium, phosphorus, magnesium and vitamins. Groundnuts have also considerable medicinal value. They are reported to be useful in the treatment of disease such as haemophilia, stomatitis, and diarrhoea.

Most of the world production of groundnuts is crushed for oil that is used mainly for cooking. The press cake from oil extraction is a feed rich in protein but is also used to produce groundnut flour, which is used in many human foods. The seeds or kernels are eaten raw, boiled or roasted, made into confectionery and snack foods, and are used in soups or made into sauces to use on meat and rice dishes. The vegetative residues from the crop are excellent forage.   In sub-Saharan Africa, groundnuts are a basic staple crop, cultivated mainly by small-scale farmers both as subsistence and as a cash crop. It is an important source of protein and other nutrients for poor rural communities. In Africa, groundnut yields are traditionally low, due to unreliable rains, little technology available to small-scale farmers, pest and disease occurrence, poor seed variety, and increased cultivation on marginal land (ICRISAT).

Groundnuts are grown in the warm tropics and subtropics below 1500 m above sea level, and in temperate humid regions with sufficiently long warm summers. Optimum mean daily temperature to grow is 30degC and growth ceases at 15degC. Cool temperatures delay flowering. Groundnuts cannot stand frost. Between 500 and 600 mm of water reasonably well distributed through the growing season allows a good production. Nevertheless, groundnuts are a drought-tolerant species and can withstand severe lack of water, but yield is generally reduced. If harvesting conditions are wet, aflatoxins (severe poison produced by some fungi such as Aspergillus spp. may develop on the nuts. Aflatoxin contamination is a major hazard to human and animal health. When thee groundnuts are poorly dried and stored, they pick mold and dirt, which attracts a fungi, that releases aflotoxin chemicals that are dangerous to human health especially the liver.

Because pods develop underground and must be recovered at harvest, crumbly, well-drained soils are preferred, but plants grow and develop adequately on heavier clay soils. For optimum growth, soil pH should be in the range 5.5 to 6.5, though Bunch types tolerate more acid conditions (pH 4.5) and some cultivars grow well in alkaline soils up to pH 8.5.

Ideally the seedbed should be deep and friable with an even particle size. Take care that the seedbed is weed-free. Cloddy and uneven seed beds can result in uneven emergence and heavy losses of plants. Recommended plant densities are near 200,000 to 250,000 plants/ha for the typically short-season Bunch cultivars. In most countries, cultivation is in rows with plant spacing ranging from 40 x 20 cm to 30 x 20 cm.

After ploughing and harrowing to a fairly good tilth, ridges, which are 80 cm apart with flattish tops, should be made so that two rows of nuts can be planted on each ridge. Seeds for planting should be well selected: they should be clean, well filled and without any blemishes. Seeds for planting should be kept in their pods and shelled a few days before planting. Planting depth is like maize about 5 to 8 cm. Seed rate is 40 to 50 kg/ha depending on the size of the seeds. There are 2 types of groundnuts:

Bunch varieties such as Red Valencia mature within 90 to 100 days, while runner types such as "Homa Bay" mature in 120 to 150 days (require a longer growing season).

With good husbandry current farmers' yields of between 450-700 kg/ha could be doubled.

Groundnuts are grown as a sole crop and also intercropped with maize, soybean and cassava. It is also a good intercrop for upland rice, sorghum, okra, sugarcane, and sunflower. To get a good yield however, proper planting distance should be observed along with the other recommended cultural practices. In some areas, they are grown under perennial tree crops such as coconut, oil palm or rubber. Groundnuts when used as intercrop for upland maize and planted along the contour reduce soil runoff. The plant also reduces population of African bollworm because it serves as a hiding place for beneficial insects. (OISAT) There is an increase in the yield of groundnuts when intercropped with early maturing pigeon pea.

The only peculiar nutrient requirement is for calcium (Ca) in the podding zone. Calcium is absorbed directly by the pods, if soil moisture is adequate. A shortage of Ca in that zone will result in empty pods (especially in Runner cultivars). The crop's needs for nitrogen should be satisfied with symbiotic fixation by strains of Rhizobium of the cowpea group, so nitrogen fertilisers are not generally required. In some areas of acid soils, lime is applied to raise the pH and supply Ca. Moisture stress during flowering or pod filling reduces yield so that irrigation during those periods to minimise or eliminate the stress increases production and seed quality. Where yields are unsatisfactory (heavily eroded soils) an application of 200 kg/ha of rock phosphate is recommended.

Bunch cultivars are harvested 85-100 days after sowing and Runner cultivars 110-130 days after sowing in the warm tropics. Dig a few plants up to see if the nuts are ready. The nuts should be brown on the outside, firm and dry. Usually at maturity the inside of the pods is grey and some rattling occurs when pods are shaken. Severe disease of foliage sometimes results in harvesting before seeds are fully mature.

Plants should be carefully dug out to avoid nuts breaking off and remaining in the ground. Dry for 2-3 days, then rip the pods from the bushes and place them on mats to dry for another 7-10 days to about 10% moisture.

Shelling should be done by hand. Broken, dirty or damaged nuts should be discarded as these will lower the quality and hence the selling price. When thee groundnuts are poorly dried and stored, they pick mold and dirt, which attracts a fungi, that releases aflotoxin chemicals that are dangerous to human health especially the liver. Nuts to be used as seed the following year should not be shelled.