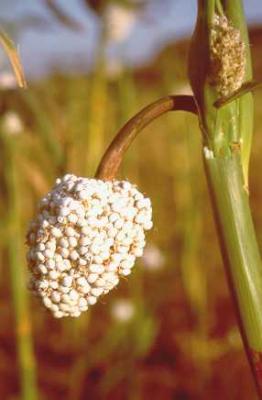 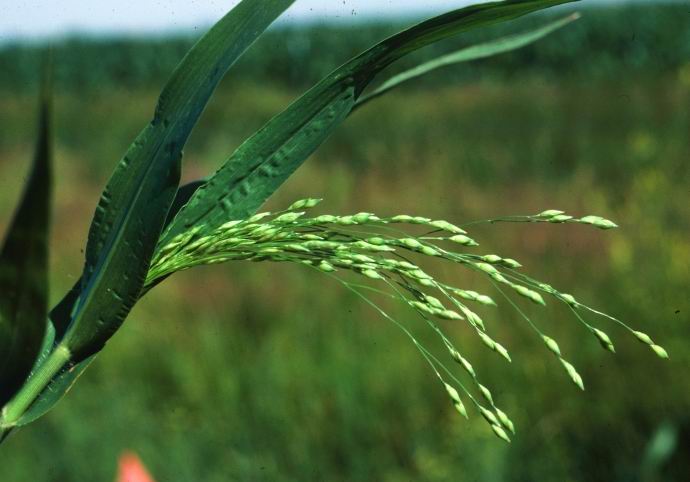 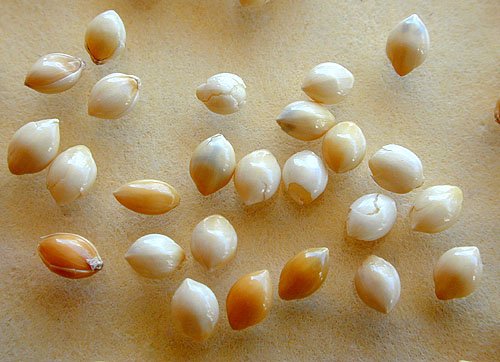 Millet (Panicum miliaceum). The small creamy-yellow seeds are edible and used as a cereal. 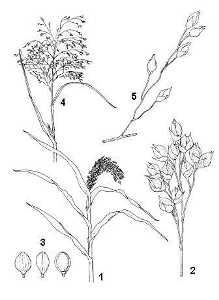 Ⓒ Reproduced from the series 'Plant Resources of South-East Asia', by kind permission of the PROSEA Foundation, Bogor, Indonesia. 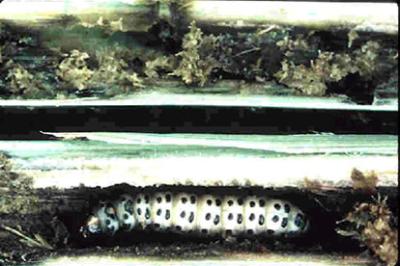 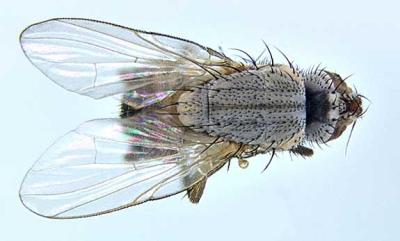 Shoot fly (Atherigona soccata) The adults are dark brown, and similar to a housefly, but nearly half the size.

Variegated grasshopper (Zonocerus variegatus). The size of adult grasshoppers may vary between 3 - 5 cm 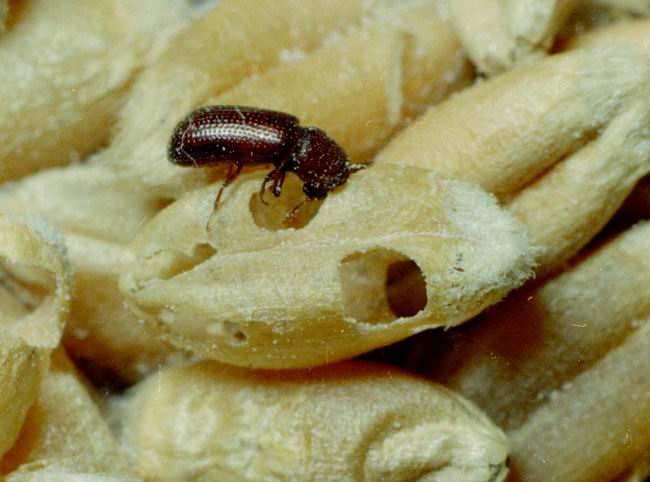 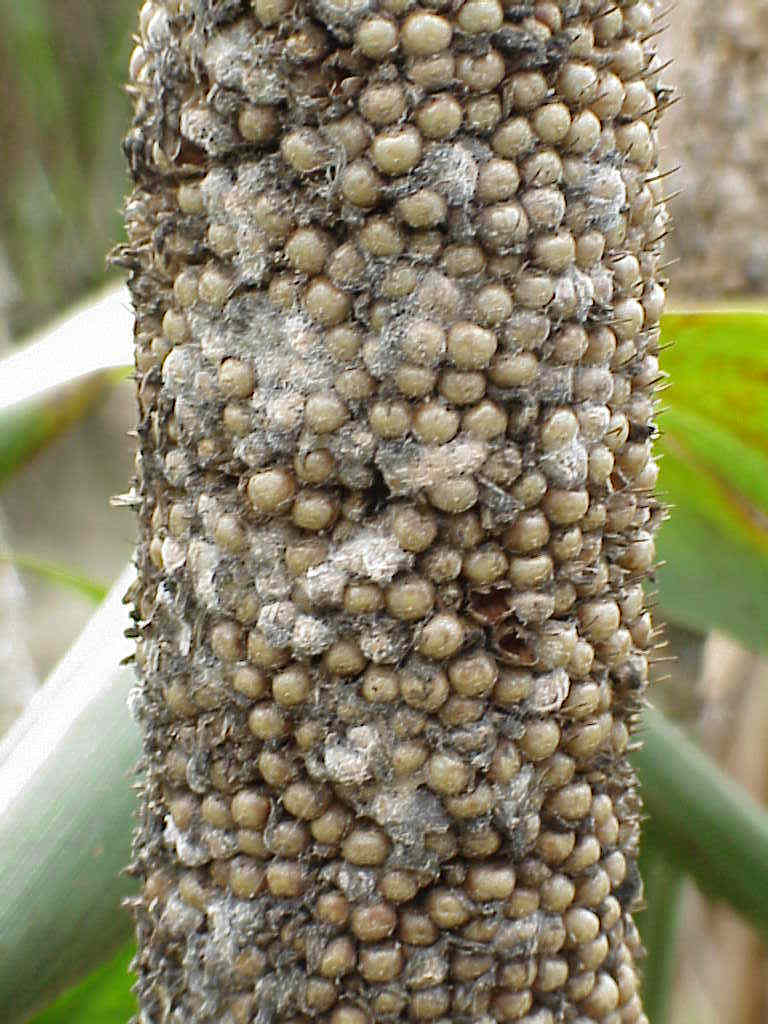 Ⓒ Reproduced from PEARL MILLET DISEASES - A Compilation of Information of the Known Pathogens of Pearl Millet (http://www.tifton.uga.edu/fat/pearlmilletdiseases.htm) 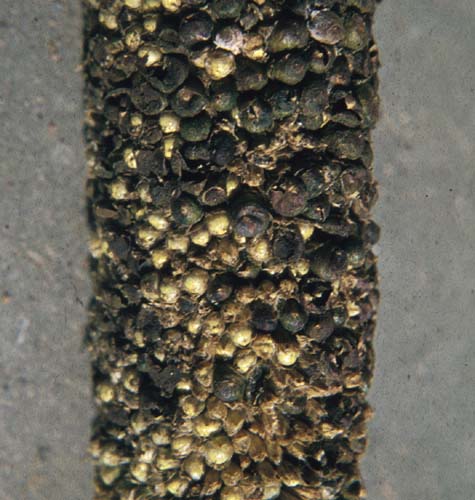 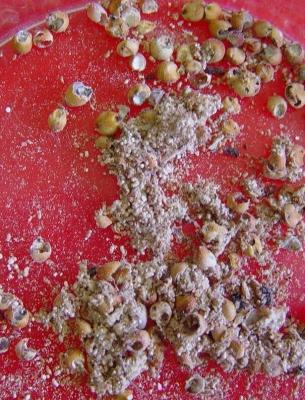 Millets refers to a group of annual grasses mainly found in the arid and semiarid regions of the world. These grasses produce small seeded grains and are often cultivated as cereals. The most widely cultivated species are:

The husked grain of millet has a slightly nutty flavour and can be eaten whole after roasting or after cooking or boiling like rice. Millet flour is used for making mush, porridge, flat bread or chapatti. The flour is also used for making wine or beer. The grain is a feed for animals. The green plant is used as forage, but the quality of the straw is poor. Brooms are made from the straw. Starch from the grains is used for sizing textiles. Millet plays a vital role as a food security crop especially in semi arid lands of Kenya. Some millet varieties will survive drought conditions where maize crops often fail to reach maturity. The popularity of millet fell for some years due to introduction of maize, wheat and rice, but is again on the rise with millers being able to sell far more than is delivered. Millet is fast becoming a popular baby food as the grains are rich in calcium and have a pleasant flavour. Due to unpredictable rainfall patterns, Kenya has been experiencing frequent maize crop failure (the main staple) leading the Government of Kenya to encourage the production of indigenous, drought tolerant crops like millet.

Millet is mostly grown in temperate and subtropical regions. It is adapted to conditions that are too hot and too dry, and to soils too shallow and poor for successful cultivation of other cereals. It is tolerant to a very wide temperature range but susceptible to frost. Cultivation occurs up to 3000 m altitude in the Himalayas. In Kenya millet is grown from 0 - 2400 m above sea level. Proso millet has one of the lowest water requirements of all cereals. An average annual rainfall of 200 - 450 mm is sufficient, of which 35 - 40% should fall during the growing period. Most soils are suitable for its cultivation, except coarse sand.

A lot of work has been done to identify improved varieties of millet to be grown under different ecological zones of Kenya.

Some recommended varieties of finger millets and their characteristics (Kenya)

All below listed varieties share the same maturity period of 100 days, potential grain yield of 2-3 t/ha, brown grain, resistant to blast, susceptible to lodging and good for food and brewing

Some recommended varieties of pearl millets and their characteristics (Kenya)

Proso and fox tail millets can be grown in all areas whereas "Gulu E" does best on coast and moist mid altitude. KAT/FM1 is recommended for semi-arid lowlands and Lanet/FM1 for cold semi arid highlands.

Selection of healthy seeds, free from bird and insect damage and diseases, is important to produce vigorous seedlings that could fare well in case of attack by pests or diseases. Prepare seed for sowing by threshing it (if at all stored on the head) and removing all mixtures such as glumes, bits of the rachis and peduncle, etc. This can be done by winnowing and occasionally by sieving. These processes also remove light and small seeds. A fast, easy and efficient method of quality seed selection uses a 10% salt solution to separate good seeds from bad seeds. The salt solution enhances the flotation of light and damaged seeds, fungal spores and light foreign matter. The good and heavy seeds and pebbles drop to the bottom. The floating portion is decanted and discarded and the sunken portion subjected to flotation one or two more times, after which the good seeds at the bottom are rinsed with clean water to remove excess salt. This portion is then sun-dried. After drying, the pebbles are removed by hand picking (DFPV, Niger).

Early land preparation is recommended. Millet requires a fine seedbed suitable for small grains, to ensure good germination, plant population density and effective weed control. If tractors or oxen are used to open up land for planting, it is advisable to harrow it after the first ploughing. When jembes (hand hoes) are used for land preparation, farmers are advised tobreak large clods to provide a smooth seedbed. Plant before or at the onset of rains by either drilling in the furrows made by oxen plough or tractor or by using a panga (cutlass) for hand planting in hills.

If the population is too high at emergence, thin when plants are about 15 cm tall, 2 weeks after emergence. Seed rate (when planted in furrows):

For sole cropping the following distances should be followed:

Millet benefits from intercropping with legumes such as green gram and cowpeas. It can also be rotated with legume crops to benefit from the soil improvement facilitated by these crops or intercropped with other non-cereal crops. Application of farmyard manure at 8-10 tons/ha is recommended in order to improve the soil organic matter content, moisture retention ability and soil structure. Phosphorous should be applied in the form of rock phosphate. Weeding should be done twice, first time 2-3 weeks after emergence and second weeding about two weeks later.

Harvest takes place 2-4 months after sowing, when the grain has a moisture content of 14-15%. Avoid delayed harvesting, as the seed shatters easily. If millet is harvested during the rainy season with high relative humidity, the grain must be dried to 14% moisture content. In households, millet is usually dried above the domestic fire. Millet is threshed immediately after harvest. The grain stores well for up to five years. Sometimes the grain is mixed with ash or slightly baked before storage. Because of its small size, the grain is barely susceptible to insect attack.