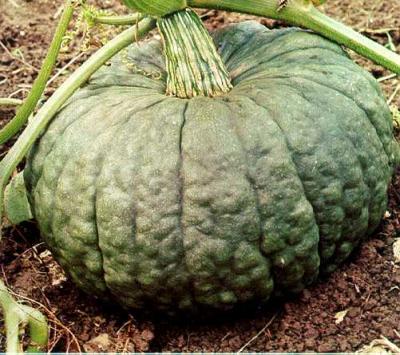 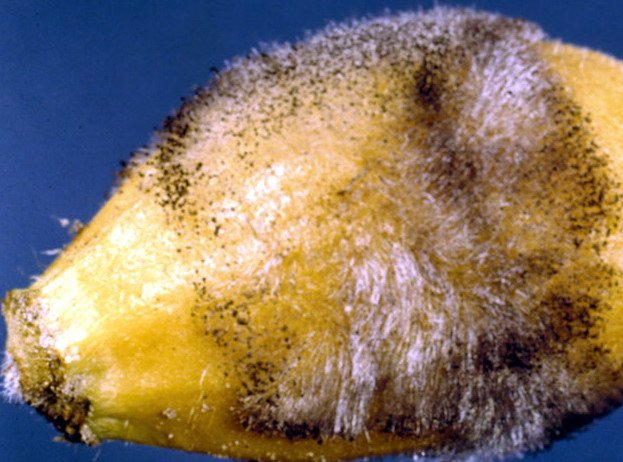 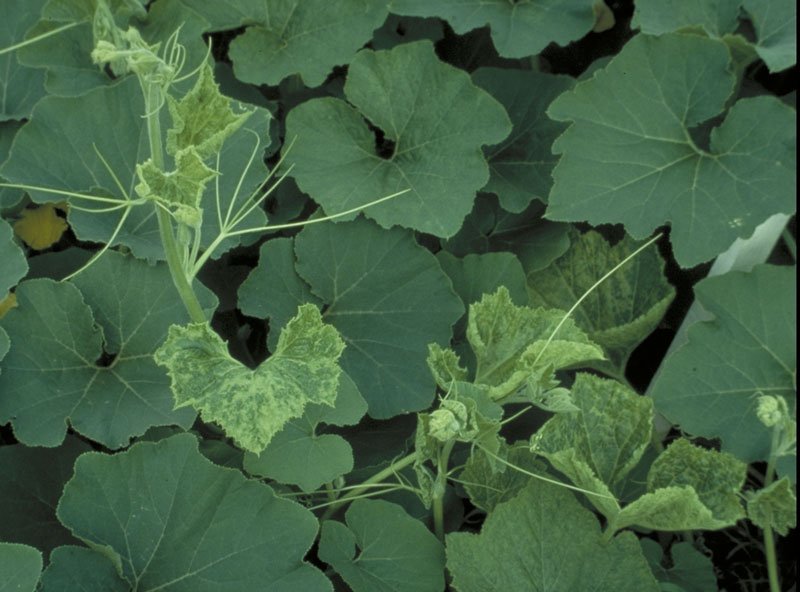 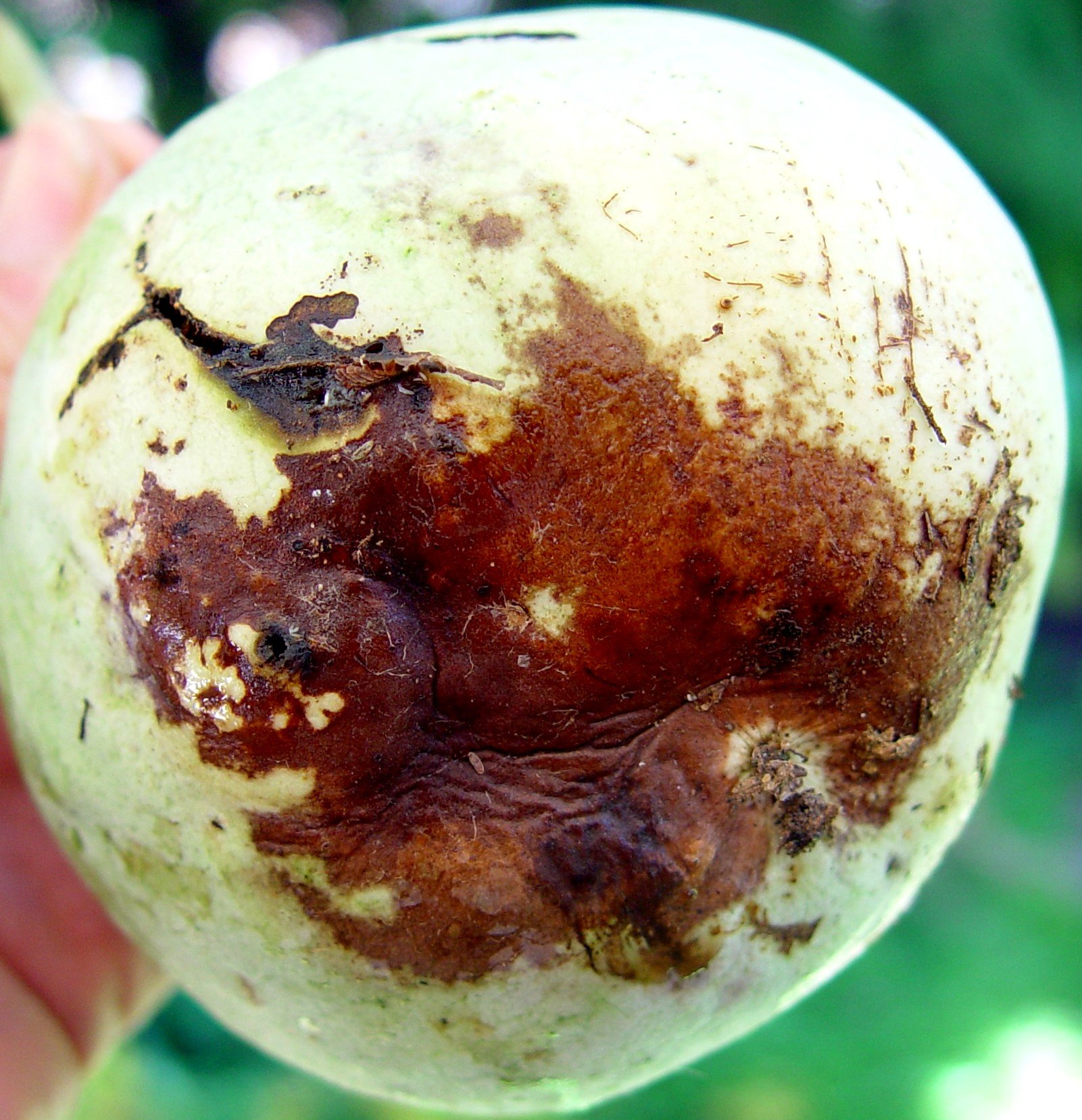 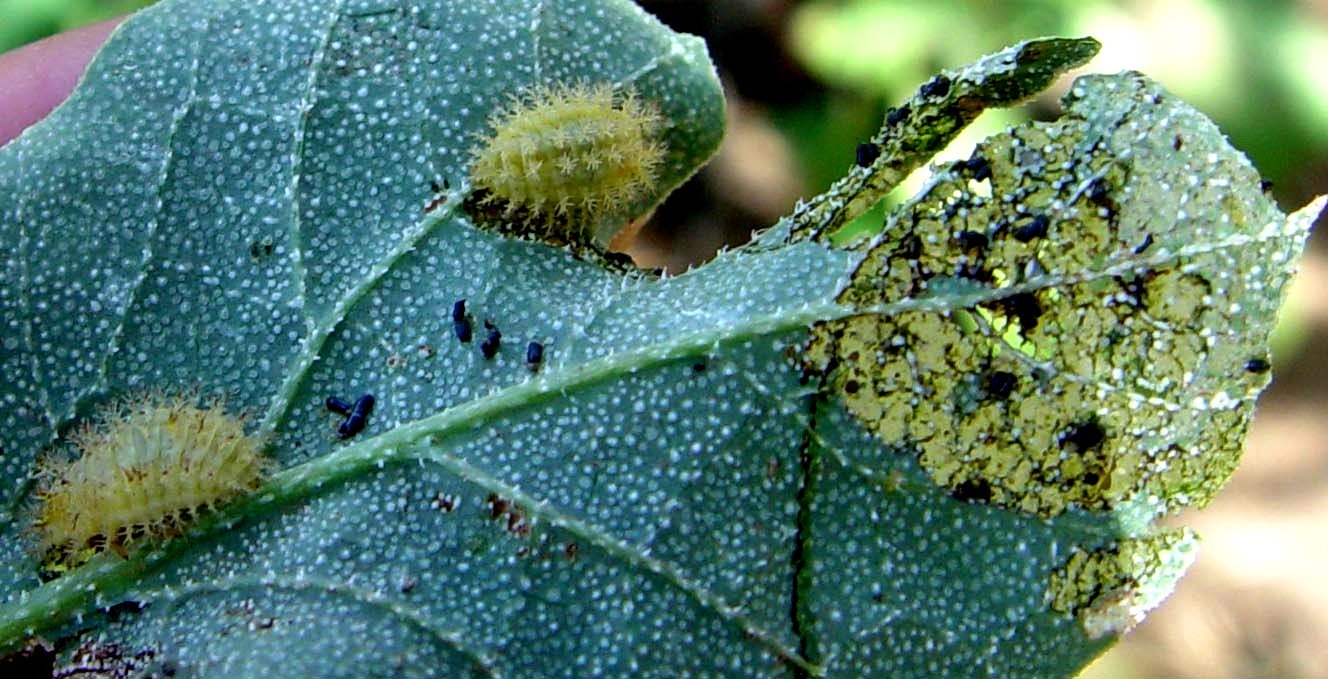 Epilachna larvae and damage to cucurbit leaf. Adults and larvae feed on the leaf surface, scraping away cells to form open windows, causing the leaf to wither. Extensive feeding can completely skeletonize the leaf. 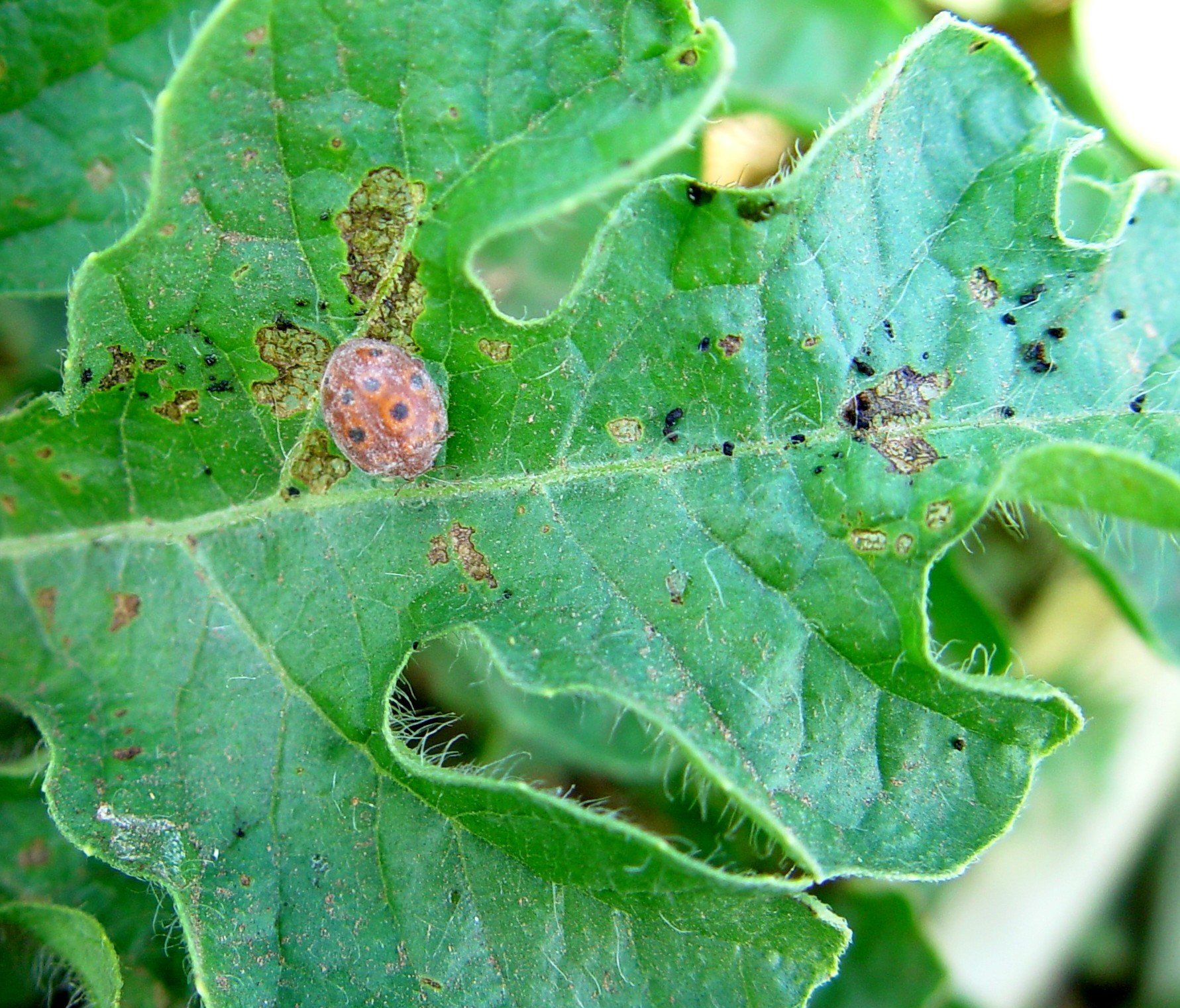 Epilachna adults and larvae feed on the leaf surface of cucurbit, scraping away cells to form open windows, causing the leaf to wither. Extensive feeding can completely skeletonise the leaf. They can sometimes also feed on the fruit causing surface damage through which secondary infection may occur. 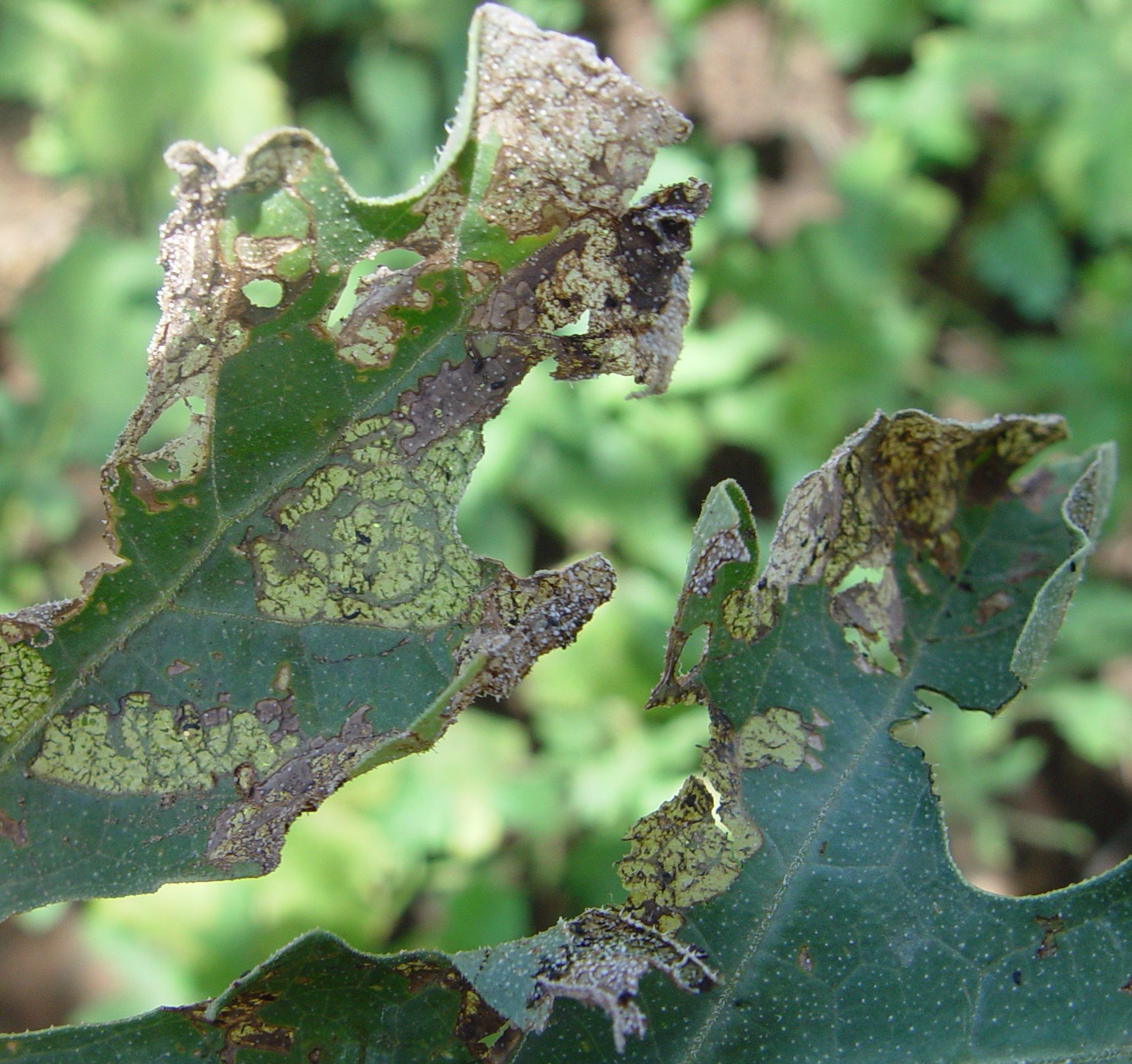 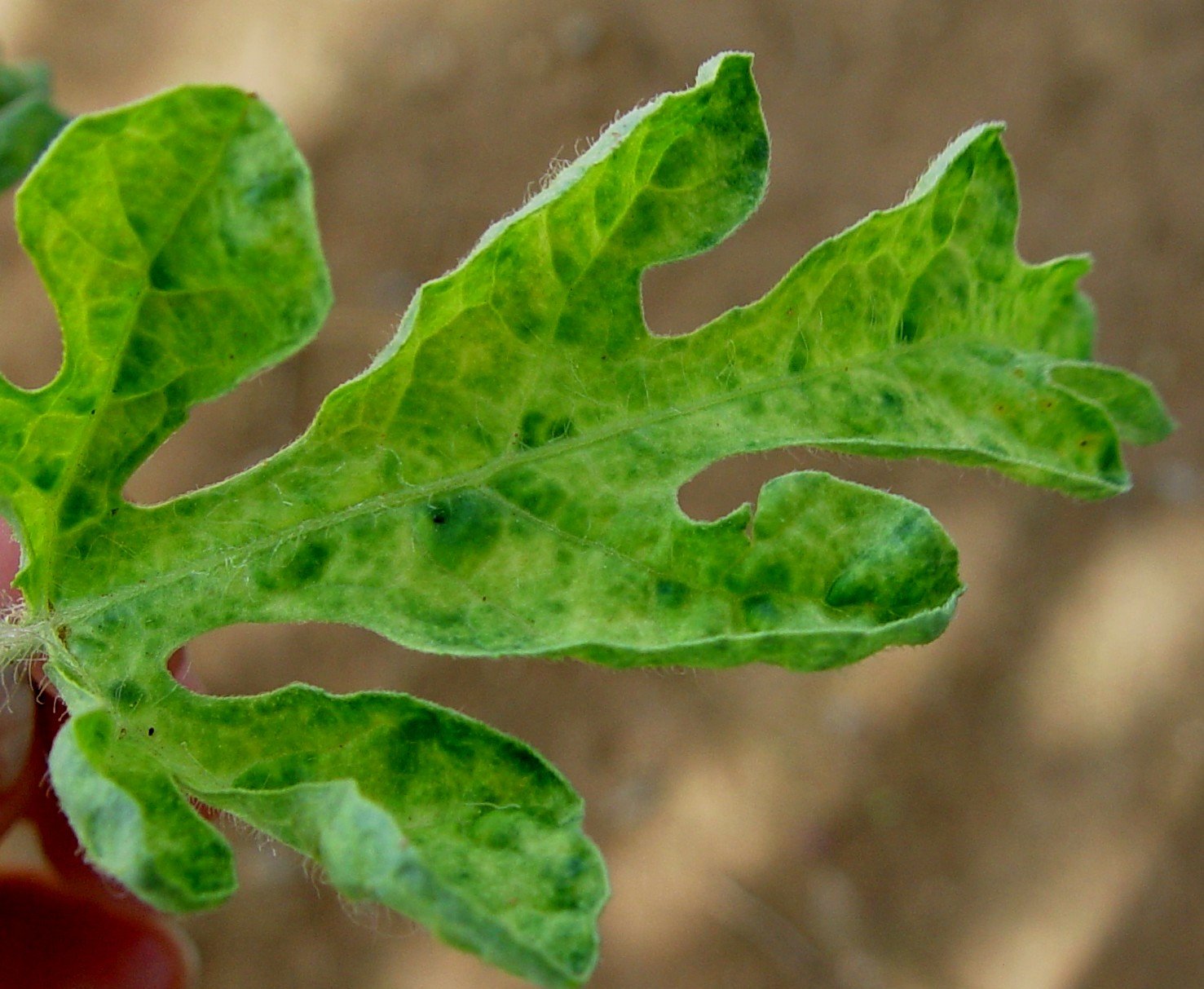 Pumpkin refers to certain varieties of Cucurbita moschata, C. maxima, and C. mixta. They are native to North America. These and other related cucurbits provide pumpkins and butternuts (Cucurbita moschata), squashes (C. maxima), gourds (C. argyrosperma), and zucchini or courgettes and ornamental gourds (C. pepo). Distinguishing them is often difficult. Pumpkins have long-running, bristled stems, large deeply-lobed leaves often containing white blotches and yellow or orange flowers separated into male and female types on the same plant. The fruit is variable in shape and colour but is often white, cream or green, containing about 70% flesh and several large white seeds.

Fruits, leaves and flowers of these cucurbits are used as vegetables, and their seeds are consumed roasted as a snack food. Pumpkin fruit contains 1% protein and 8% carbohydrates, and the dried seeds contain 23% protein, 21% carbohydrates and up to 50% oil, but little information is available about the nutritional characteristics of cooked leaves (Woomer and Imbumi, 2005).

There are numerous types and cultivars, which differ greatly in composition and therefore in their suitability for certain culinary uses. The younger leaves are collected and the outer tough skin of petioles (stalk of leaf) removed (together with the large leaf veins) then washed, chopped and boiled.

Immature and mature fruits of C. moschata are used as a blanched, steamed or fried vegetable and as an ingredient of soups. Various desserts are made from the fruits: steamed flesh with grated coconut and sugar, crisps made from steamed mashed flesh mixed with cassava flour, pumpkin custard, pumpkin pudding, pumpkin in coconut milk and sweet pumpkin paste. Ornamental gourds are cultivars of C. pepo with small, bitter and inedible fruits in many shapes, sizes and colours.The potential of the seeds as a source of vegetable fat and protein has not been fully exploited. Fresh seeds have been reported to be used as a vermifuge, and seed decoctions as diuretic and to reduce fevers.

The pumpkin has been much used as a medicine in Central and North America. It is a gentle and safe remedy for a number of complaints. The seeds are widely used as an anthelmintic. The complete seed, together with the husk, is used to remove tapeworms. They are especially useful effective as tapeworm treatment for children and pregnant women for whom stronger and toxic remedies are unsuitable. The seeds are ground into fine flour, then made into an emulsion with water and eaten. It is then necessary to take a purgative afterwards in order to expel the tapeworms or other parasites from the body. The fruit and seed decoctions have been reported to be used as diuretic and to reduce fevers, and are used for curing indigestion. The pulp is applied to burns and scalds, inflammation, abscesses and boils. It is also used in the treatment of migraine and neuralgia (Plants for a Future 2003; CAB 2006).

Recently a new pumpkin relative, butternut has captured the market in Kenya. It was originally imported from South Africa and sold at very high prices in the upper level market, but is now widely grown by small farmers. Butternut has smooth yellow-orange flesh, is very nutritious and is widely used cooked and mashed as baby food. As the price came down this vegetable has gained wide popularity all over the country.

Pumpkins and squashes (various Cucurbita spp.) are grown in the tropics from the lowlands up to 2500 m altitude. They are warm-season crops adapted to monthly mean temperatures of 18-27degC. C. maxima is the most tolerant of low temperatures, C. moschata and C. argyrosperma the least, with C. pepo intermediate. C. maxima and C. pepo have long been cultivated in temperate regions. Butternut appreciates part shade in very hot conditions, such as can be obtained when intercropped with other crops or grown under fruit trees.

Pumpkins and squashes respond very well to medium to heavy applications of compost or well- decomposed manure. They can be cultivated on almost any fertile, well-drained soil with a neutral or slightly acid reaction (pH 5.5 to 7). They are drought-tolerant, requiring relatively little water, and are sensitive to waterlogging. Excessive humidity is harmful because of the development of leaf diseases, so none of the species do well in the humid tropics.

Pumpkins and squashes are grown from seed. Seeds may be sown in containers and transplanted to the field when they are 10 cm high. Direct seeding of 2 to 3 seeds per hill is commonly practised. Trailing types are planted at distances of 2-3 m either way; the seed requirement is 2 to 3 kg/ha. The bushy types (mainly C. pepo) are planted closer, for example, plants spaced 60 to 120 cm in rows 1 to 1.5 m apart; the seed requirement is 3 kg/ha for pumpkin and 7 kg/ha for summer squash (C. pepo). Do not use seeds from plants where edible pumpkins and ornamental gourds are grown close together. Offspring will be bitter or even inedible.

Varieties of butternut available in Kenya

Sole cropping is sometimes used for commercial production. Pumpkins and squashes are also planted in home gardens or mixed with field crops such as maize. Cultural practices to improve growth and development include the removal of growing tips (in trailing varieties) to check growth, and the bagging of fruits in paper to protect against fruit fly and other pests. Fruit setting may be stimulated by manual pollination. The fruit may rot when in contact with moist soil, so often cut grass or leaves are placed beneath the fruit.

Winter squashes and pumpkins are picked when mature in an once-over harvest or in several rounds, about 90 to 120 days after planting depending on variety. Pumpkins are considered to be among the most efficient of vegetable crops when evaluated on nutritional yield in relation to land area and labour needed. Indicative figures for seed yield of C. pepo are 400 to 1500 kg/ha. A valuable source of oil and protein is thus neglected if the seeds are left unutilised. In seed production, isolation between fields of different Cucurbita species is recommended, not only for reason of purity but also for obtaining maximum yields (pollen of other species may cause reduced fruit set).

Fresh Quality Specifications for the Market in Kenya

Pumpkin and butternut are affected by similar pests as other cucurbits; since they belong to the family Cucurbitacea, including melons, squash, zucchini (courgettes) and cucumber.

Pumpkin and butternut are affected by similar diseases as other cucurbits; since they belong to the family Cucurbitacea, including melons, squash, zucchini (courgettes) and cucumber.