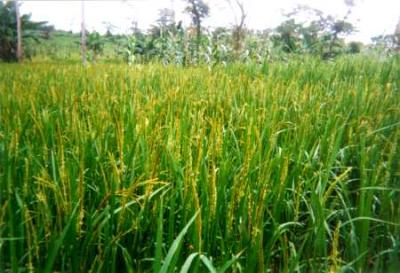 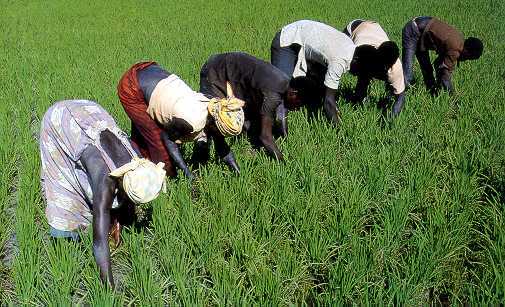 Farmers do weeding in an irrigated rice field in Burkina Faso. 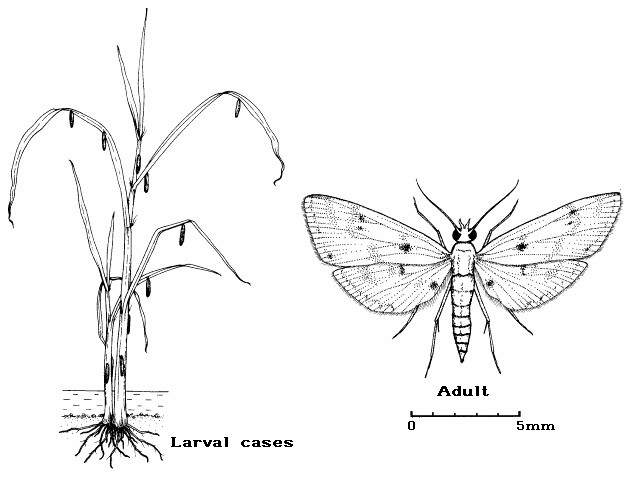 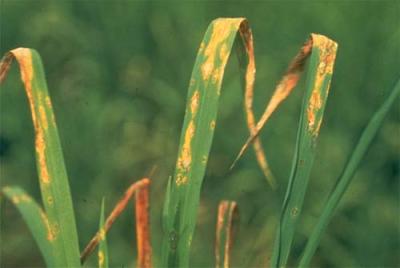 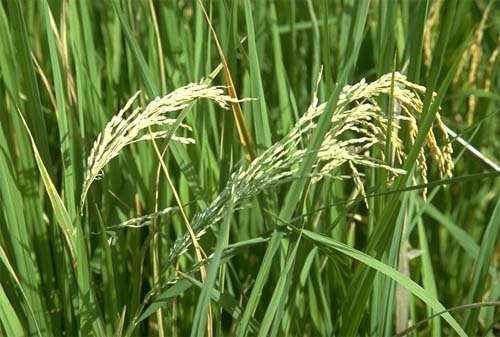 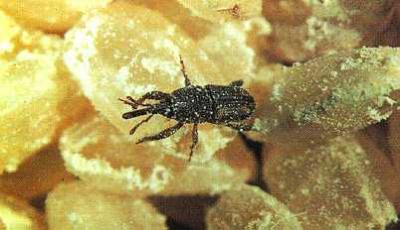 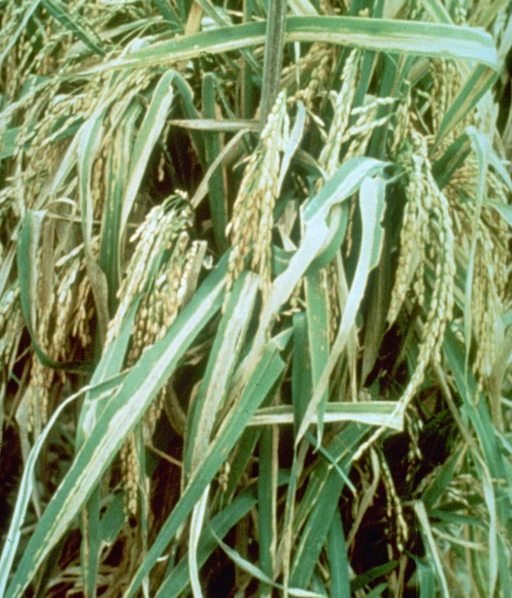 Bacterial leaf blight (Xanthomonas oryzae pv. oryzae) on mature rice plants. Lesions begin as water-soaked stripes on the leaf blades and eventually would increase in length and width becoming yellow to greyish-white until the entire leaf dries up. 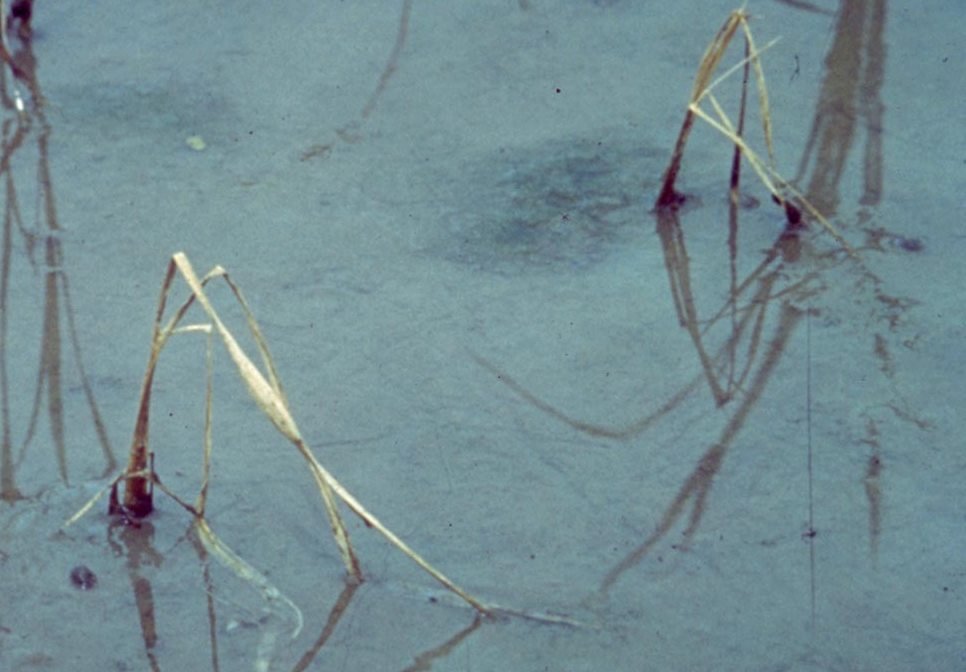 Rice seedlings infected with Bacterial leaf blight (Xanthomonas oryzae pv. oryzae). Infected leaves wilt and roll up, turning grayish-green to yellow, until the whole seedling dies. Plants which have survived the disease are stunted and yellowish. 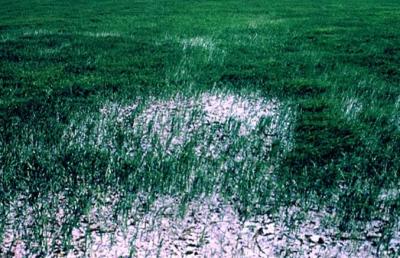 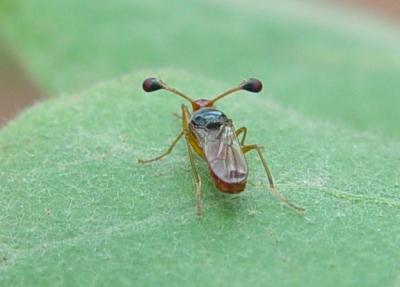 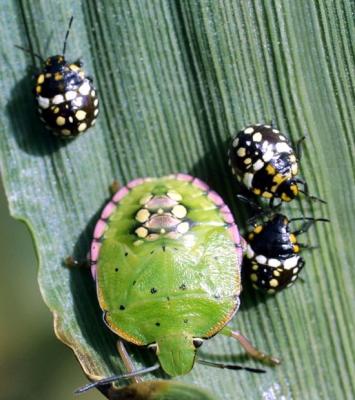 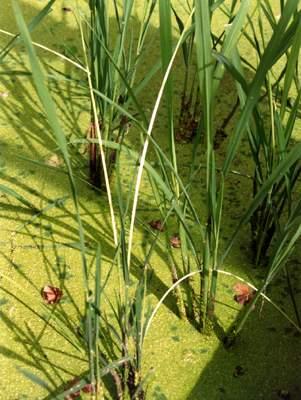 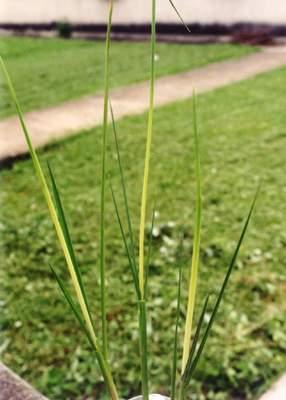 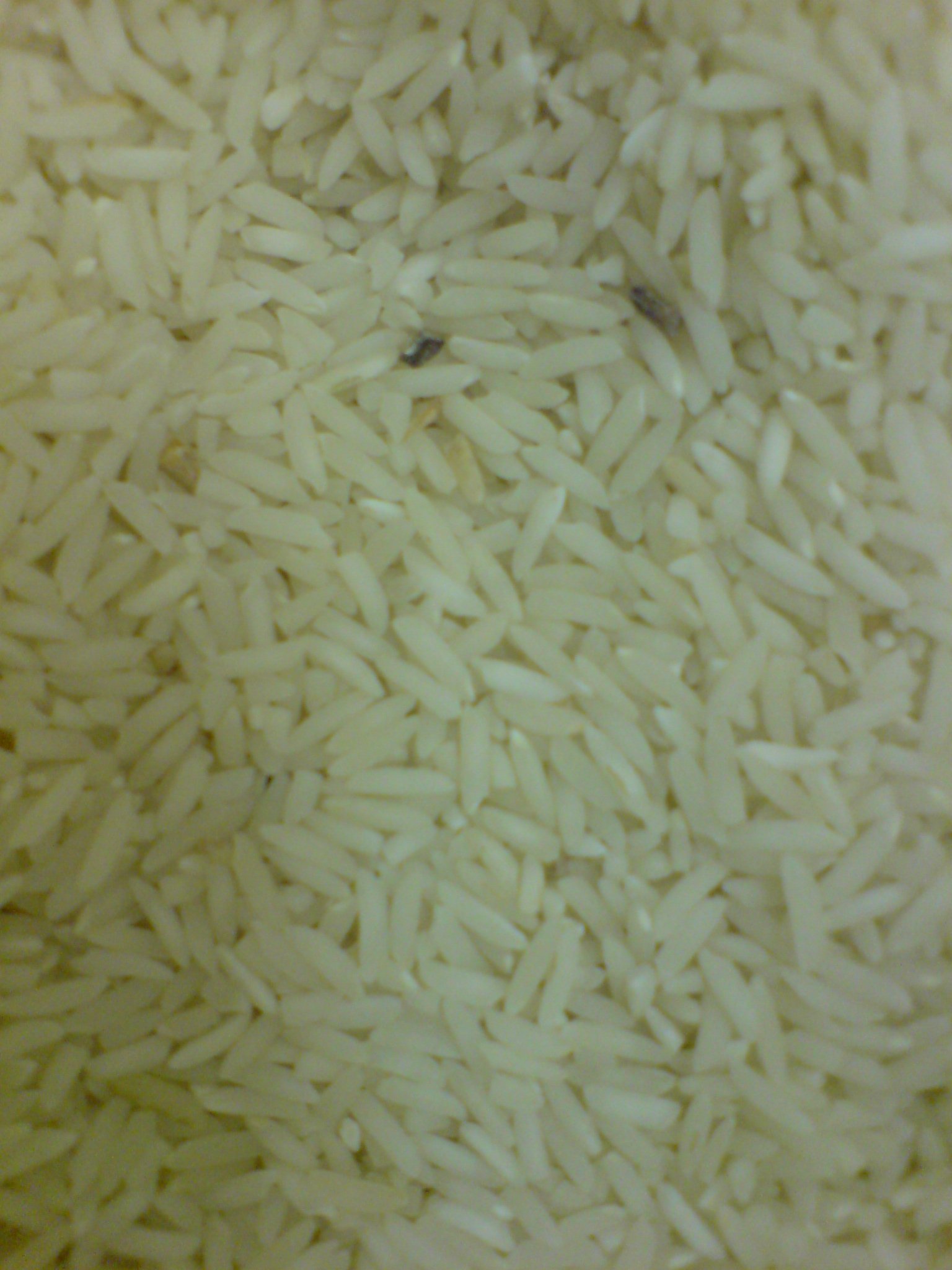 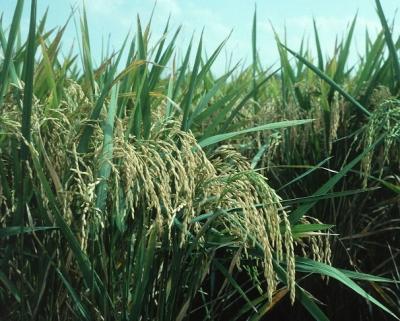 The cultivated rice is an annual grass. Depending on the degree of sensitivity to light its growth duration may range from 60 to more than 200 days. Cultivated rice belongs to two species, Oryza sativa -Asian rice, (which is more widely used) and Oryza glaberrima - African rice. Rice is grown in four ecosystems, which are broadly defined on the basis water regimes. The ecosystems are irrigated, rain-fed lowland and upland, and flood prone.

Rice is cultivated primarily for the grain, which is a main staple food in many countries, especially in Asia. In Kenya it is becoming increasingly popular, especially in urban centres. From 2010 to 2014, Kenya had a yearly production of about 119,000 metric tons (FAOSTAT, 2014).  Consumption of wheat has been on a steady increase from 410,000 metric tons in 2010 to 564,000 metric tons in 2014 (Economic Review of Agriculture, 2015). This increase in demand and the development of new upland varieties have created an opportunity for farmers to venture into rice growing.

Rice will give the same or better yield as maize and fetch the double price on the market at harvest time. Grains are quite nutritious when not polished. Common or starchy types are used in various dishes, cakes, soups, pastries, breakfast foods, and starch pastes; glutinous types, containing a sugary material instead of starch, are used in the Orient for special purposes as sweetmeats. Grain is also used to make rice wine, "Saki", much consumed in Japan. Rice hulls are sometimes used in the production of purified alpha cellulose and furfural (an industrial chemical derived from a variety of agricultural by-products, and commonly used as a solvent). Rice straw is used as roofing and packing material, feed, fertiliser, and fuel.

Rice thrives on land that is water saturated or even submerged during part or all of its growth. Optimal temperatures for rice growing are 20 to 37.7degC, and no growth occurs below 10oC. Optimal pH is between 5 and 7, though rice has been grown in fields with pH between 3 and 10. Rice will grow in altitudes ranging from 0 to 2500 m above sea level, but world wide is mostly grown on the humid coastal lowlands and deltas. Aquatic rice may require a dependable supply of fresh, slowly moving water, at temperature of 21 to 29degC. Rain fed rice requires an average of 800 to 2000 mm of rainfall well distributed over the growing season. If rainfall is less than 1250 mm annually, irrigation is used to make up deficit. The crop is salt tolerant at some stages of growth; during germination but not seedling stages and has even been grown to reclaim salty soils. Terrain should be level enough to permit flooding, yet sloped enough to drain readily. The soils on which rice can grow are as varied as the climatic regime it tolerates, but ideally it prefers a friable loam overlying heavy clay, as in many coastal and delta areas.

2. Seed pre treatment. This is practised in order to secure better germination of seeds and better growth of seedlings. It involves:

a) Under irrigation: Land preparation is carried out by flooding the fields to a depth of 10 cm and then cultivating by use of tractor (40 to 75 hp) equipped with rotavators. Good timing and quality of land preparation will influence the growth of rice. Poor and untimely land preparation will cause serious weed problems and expose plants to harmful substances such as carbon dioxide and butyric acid, released by decaying organic matter in the soil.
It is recommended that land should be tilled and immediately flooded at least 15 days before transplanting or direct sowing. The purposes of this are:

b) Under rainfed situation: Land should be ploughed twice and harrowed once.

Seedlings are spaced according to the tillering ability of a variety. "Basmati 217" should be planted at 20 cm x 10 cm, "BW 196" and others at 20 x 20 cm.
Seedling number per hill: Two to three for "Basmati" and other low tillering varieties. For "BW 196" one to two seedlings per hill are more suitable for good rooting and tillering. Higher seedling rates increase competition for the available nutrients, hence should be discouraged.

Practise shallow planting of about three cm depth for vigorous initial growth and will result in good rooting and tillering. Deep transplanting delays and reduces tillering resulting in a non-uniform crop growth and ripening, consequently resulting in yield losses. Seedlings should be transplanted in an upright position to allow correct tillering and rooting.

Direct sowing method: Trials have been done on direct sowing and have showed that the same level of yields performance as those of transplanting system can be obtained. This method saves substantially on labour input. However it has some disadvantages such as uneven germination rate and more weeding work in the paddy field.

Planting should be done before the onset of the long rains. Farmers are advised to use certified seed and appropriate variety for the region. Drill seed in rows at the rate of 50 kg/ha with a spacing of 25 cm for short varieties and 35 cm for tall varieties. In case of broadcasting, 75 kg/ha is often used.

Water is applied to the rice field for the use of the rice plant and also for suppressing weed growth. For this reason, it is important to practise appropriate water management throughout the growing period of a rice crop.
In lowland rice fields, water comes from rainfall and irrigation. Water is lost by transpiration, evaporation, seepage and percolation. Prevent water loss by:

Critical stages when water is required in large quantities are:

Seven to 10 days before harvesting, drain the field to harden the soil for good harvesting and also to hasten the drying and ripening of the rice grains.

Varieties of irrigated rice and their characteristics:

The upland "NERICA" rice varieties were developed at the Africa Rice Center (AfricaRice) ex-WARDA. They are resistant to blast, RYMV stemborers and leafminers and are high yielding and doing well from West Africa to Uganda. They are now also being promoted by NIB (National Irrigation Board), Kenya, KALRO and JICA. In Kenya they have great potential for medium altitudes with high rainfall or possibility for irrigation. "NERICA" can be planted as other small grains, but do need irrigation especially during flowering, and fertilisation.

Some characteristics of the NERICA varieties (KEPHIS)

Crop rotation
Continuous rice monoculture systems result in decline in soil fertility due to over dependence on chemical fertiliser, and deterioration in physical properties of the soil like texture and microbial existence.
To improve the situation, trials have been carried out on many potential rotation systems. Soybeans and green grams have shown a lot of potential in alleviating the problem. Such legumes can be cultivated during off-season at the time the land used to lie fallow. Crop rotation with bananas or sugarcane is another possibility.

Natural fertilisers commonly used in rice production are rice straw, rice ash, stable manure, buffalo dung, green manure, natural manure, rock phosphate, gypsum etc. The need of nitrogen varies with varieties. In Kenya, commonly about 80kg N/ha is recommended, along with 58 kg P2O5 (Mwea irrigation scheme). However, the National Irrigation Board (NIB) has found that planting soybean or green gram in the fallow season can halve the need for nitrogen. They further recommend composting of rice straw and manure to further cut down on chemical fertilisers. In organic growing, phosphorous can be applied as rock phosphate, and nitrogen through green manure legumes, which fix the nitrogen from the atmosphere.
See also Mwea Rice Production Manual available from NIB.

Time from planting to harvesting varies between 4 to 6 months. Rice is cut, swathed and threshed from windrow. In the tropics it is essential to harvest the crop on time, otherwise grain losses may result from feeding by rats, birds, insects and from shattering and lodging. The crop should be ready to harvest when 80% of the panicles are straw dust coloured and the grain in the lower portion are in the hard dough stage. In a well-grown crop the grain matures evenly and can be harvested in one operation. Cutting can be done with a sickle. The cut stems are bundled for transport to the threshing place, where final drying to around 12% moisture takes place before threshing and storage.