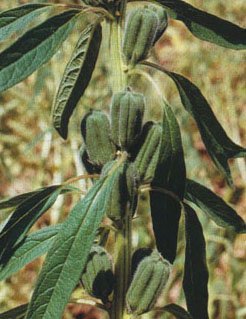 Sesame is an excellent rotation crop of cotton, maize, groundnut, wheat, and sorghum. It reduces nematode populations that attack cotton and groundnut. It is also an excellent soil builder - as it improves the soil texture and moisture retention and lessens soil erosion. The composted sesame leaves left on the soil binds the ground; retains soil moisture better for planting the next crop; and increases the yield of the following crop. Sesame is resistant to drought, tolerant to insect pests and diseases, a low cost crop and therefore one of the best alternative specialty crops.

Sesame originates in East Africa and is the oldest of the commercial oil seeds. The oil is a clear edible oil with a pleasant taste and a very good long shelf life if properly refined. Sesame has an oil content of 48-55% which is the highest of any oil crop while the protein content ranges from 44 to 48%.

Sesame seeds are either consumed directly as a highly nutritious foodstuff or processed by the confectionery and bakery industries. The seed hulls, which are bitter due to their oxalic content, can be removed with the use of steam. Ragouts and soups are often prepared with crushed sesame seeds. Sesame hay, if carefully dried, can be used as fodder. A large proportion of the world's sesame production goes towards producing edible oil. Purely white sesame seeds are in demand on conventional and on ecological markets, because of their higher oil content than pigmented varieties. By-products of oil extraction are an excellent protein component to mix into animal feed.

Sesame needs a constant high temperature, the optimum range of growth, blossoms and fruit ripeness is 26 to 30degC.
Sesame only grows well in a warm climate and in East Africa it is only grown from sea level up to 1500 m. Most varieties of sesame are photoperiod sensitive .

In Kenya sesame is grown in the following areas:

Good harvests can be expected when rainfall of 300-600 mm is equally distributed throughout the vegetation period. Optimum rainfall times: 35% before the first cusps are formed, 45% during the main blossoming period, 20% during the ripening period. Drought during harvesting is preferred. During each of its development stages, the plant is highly susceptible to water-logging, and can therefore only thrive during moderate rainfall, or when irrigation is carefully controlled in drier regions. Due to its tap roots, the plant is highly resistant to drought and can provide good harvests, when soil moisture is adequate.

A wide range of soils are suitable for sesame cultivation. Optimal are well-drained, loose, fertile and sandy alluvial soils that have a pH value between 5.4 and 6.75. When irrigated, or during summer rain spells, sesame grows better in sandy than in heavy soils because it is very sensitive to high soil moisture content. It is not recommended to plant sesame on sloping ground, because its need of weed-free seed beds and its slow rate of early development can lead to erosion.
Sesame tolerates temperatures of 24-33degC and the crop matures in 120-140 days.

There are local varieties of sesame with black, white and brown seed colours. The black varieties are grown in the coastal region and the white in the western region of Kenya.
Imported varieties have lower performance than local varieties. The best of the imported varieties is "Morada", identified by its purple stems and leaves. It originated in Congo and further selected in Venezuela. It is higher yielding and more resistant to aphid attack. The local sesame varieties are branched and drought resistant but have a low yielding capacity and are susceptible to most diseases.KS-S6 variety can be grown from 200-1000 masl, gives an average yield of 2.5-3.0 tons/ha. This variety has a high poding ability, is tolerant to rust and shootfly.

Sesame is often sown as an opening crop in a rotation, as it requires a fertile soil. In this case grasses must be eradicated as sesame is a poor competitor to weeds. Planting must be done as early in the rains as possible. A rough seed bed is required despite the small seed size of sesame. A smooth seedbed with a fine tilth is more likely to form a hard cap after heavy rains and prevent germination.
There are several cultivation methods:

The optimum depth to sow is around 1.5 to 2.5 cm. It is important to sow at an even depth to ensure simultaneous and uniform growth of the crop. Small-holder farmers will often sow by hand.. This method requires 5-10 kg/ha of seeds. Mixing seed with sand, dry soil, ash or dried, sieved manure or compost will help to make seed distribution more uniform. In order to achieve an optimum crop density, branching varieties should be singled out to 6-10 cm, or definitely less than 15 cm distance within the rows when they reach a height of 5-10 cm.

Sesame is often sown with other crops such as pigeon peas, maize or sorghum. It grows to a height of 1-2 m.

Young sesame plants grow very slowly during the first 25 days, due to the small seed size, and are not yet strong enough to compete against weeds. Natural weed resistance sets in when growth rapidly accelerates, after the plants have attained a height of 10 cm. For this reason, the field should be kept as weed-free as possible during the first 20-25 days after seeding. This is usually achieved through 2-3 hand cultivations or by slashing weeds at soil surface as soon as practically possible, and hand weeding the rows of crops.
Additional measures in weed control include:

Sesame matures between 3-4 months. It ripens very unevenly with the bottom seeds ripening first. Capsules shattering to shed their seeds is a problem in harvesting. If harvesting is delayed, most of the yield will be lost.
The plants are cut to a height of 10-15 cm, or uprooted before the capsules are fully ripened. The optimum time for harvesting is when:

Sesame is generally harvested by hand, and then left to dry for the first 2-3 days after cutting in a windrow. The leaves dry out quickly there, making it easier to bundle them into sheaves. The sheaves should be positioned so that the sun can shine down directly onto the capsules. The sheaves should be small (diameter of 15 cm, bottom: 45-80 cm). During harvesting, the planting seeds should not be allowed to come into contact with the ground to avoid an infestation of soil borne diseases. The seed shells must remain intact to protect the seeds from infection, and to maintain their ability to germinate.
When the sheaves have dried out fully, they are tipped out onto sturdy cloths or canvases and threshed with sticks. To achieve maximum quality (and market price) the threshing cloths/canvases should be at least 2mx3m to avoid contamination with soil particles. Directly following the threshing, the sesame seeds are sieved of leaves, stems and capsule residues, and then dried out to a moisture content of 6% as rapidly as possible. This can be done on a clean, sun-drenched concrete base preferably covered by a clean plastic sheet to avoid contamination.