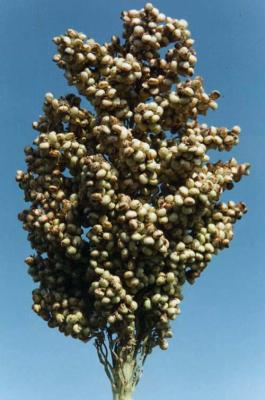 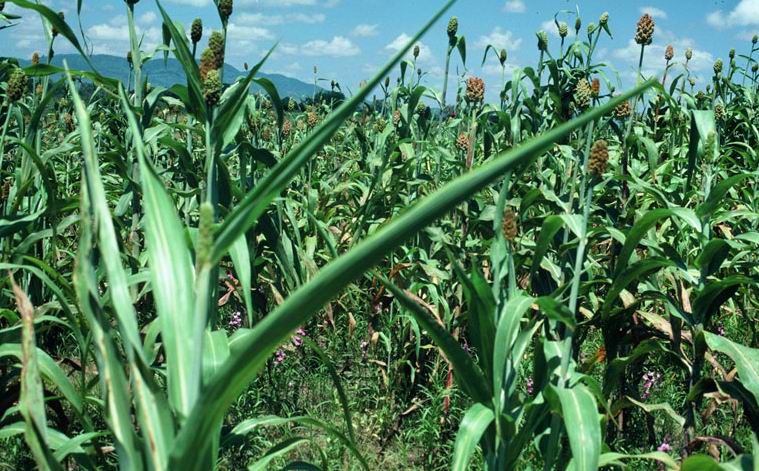 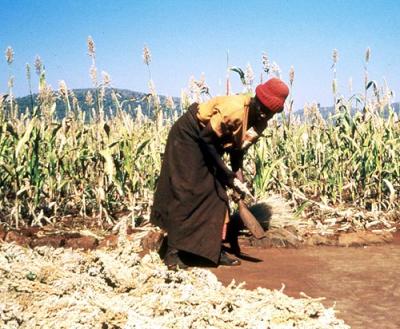 Sorghum grain heads are dried in the sun on the threshing floor until the seeds drop easily. Threshing is done with a patole - a hand held flattened instrument made from torchwood 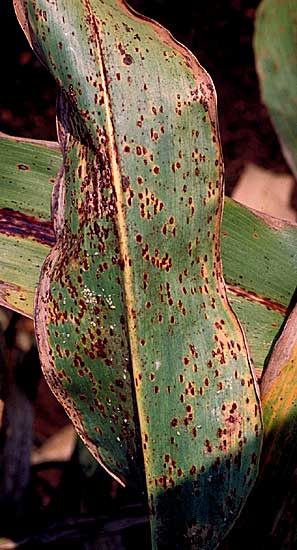 A sorghum rust infection at this level can cause substantial reduction in yield. 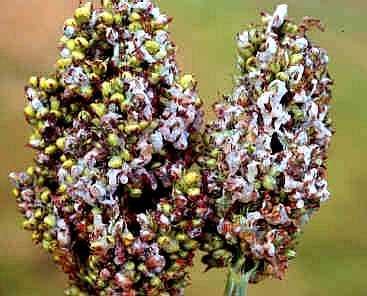 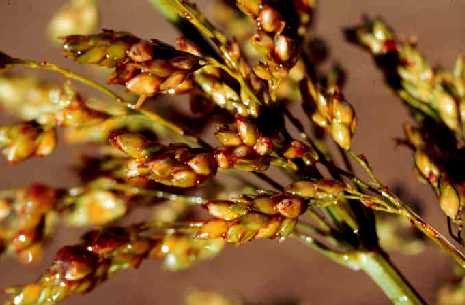 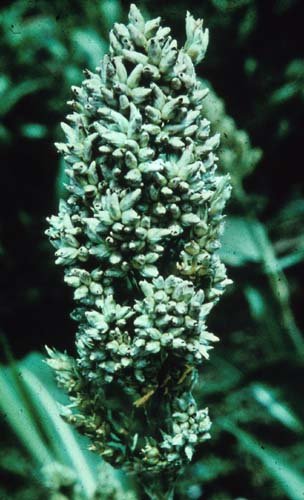 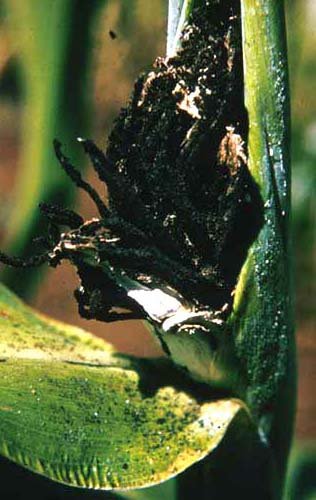 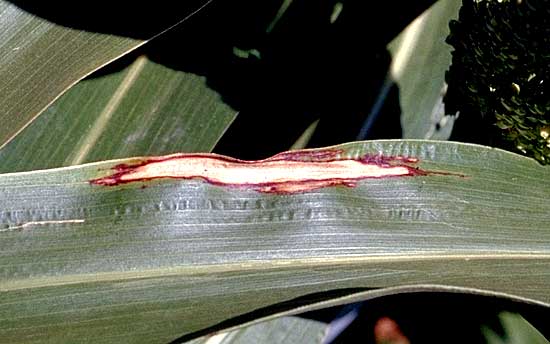 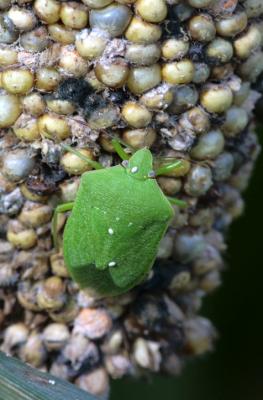 In Africa, a major growing area of sorghum runs across West Africa south of the Sahara almost to the coast and eastward into Sudan, Ethiopia, and Somalia. It is grown in upper Egypt but is a minor crop along the north African coast. It is commonly grown in Uganda, Kenya, Tanzania, Rwanda, and Burundi and fairly important in Zambia, Malawi, and drier areas of Mozambique. It is important in Botswana and Lesotho and common in South Africa, and minor in Namibia.

Sorghum is perhaps the world's most versatile crop. Some types are boiled like rice, some cracked like oats for porridge, some "malted" like barley for beer, some baked like wheat into flatbreads, and some popped like popcorn for snacks. A few types have sugary grains and are boiled in the green stage like sweet corn. The whole plant is often used as forage, hay, or silage. The stems of some types are used for building, fencing, weaving, broom making, and firewood. The stems of other types yield sugar, syrup, and even liquid fuels for powering vehicles or cooking meals. The living plants are used for windbreaks, for cover crops, and for staking yams and other heavy climbers. The seeds are fed to poultry, cattle, and swine. (Lost Crops of Africa, Vol I, 1996) Sorghum plays an important role as a food security crop especially in semi arid lands of Kenya. It can survive drought conditions for some weeks by rolling up its leaves and thus decreasing transpiration. Please also check KARI update: "Sorghum helps provide better food security", July 1997, available in English on http://www.kari.org/ENGLISH/Sorghumfood.htm (click to follow link)

Sorghum is adapted to a wide range of environmental conditions and will produce significant yields under conditions that are unfavourable for most other cereals. Sorghum is particularly adapted to drought.
Sorghum also tolerates water logging and can be grown in areas of high rainfall. It is, however, primarily a plant of hot, semi-arid tropical environments with rainfall from 250 mm that are too dry for maize but performs best with more than 900 mm annually. It is also grown widely in temperate regions and at altitudes of up to 2500 m in the tropics. Sorghum tolerates a wide range of temperatures. Sterility can occur when night temperatures fall below 12-15degC during the flowering period. Sorghum is killed by frost.

Sorghum can be grown successfully on a wide range of soil types. It is well suited to heavy clay soils (vertisols) found commonly in the tropics, where its tolerance to water logging is often required, but is equally suited to light sandy soils. It tolerates a range of soil pH from 5.0-8.5 and is more tolerant to salinity than maize. It is adapted to poor soils and can produce grain on soils where many other crops would fail.

Sorghum is normally grown from seed. A fine seed-bed is preferable but is often not achieved. The seed is usually sown directly into a furrow after ploughing, but can also be broadcast and harrowed into the soil. Optimum plant spacing depends on soil type and availability of moisture.

For favourable conditions, row spacing of 45-60 cm and plant-to-plant spacing of 12-20 cm, giving populations of about 120 000 plants per ha, are normal. For drier or less fertile conditions, wider spacing and lower plant populations are usually optimal. The seed rate varies from 3 kg/ha in very dry areas to 10-15 kg/ha under irrigation. Occasionally, seedlings are grown in a nursery and transplanted into the field early in the dry season, e.g. on the flood plains round Lake Chad in Africa.

Production zones in Kenya and recommended sorghum varieties and their major characteristics:

Examples of some sorghum varieties grown in Uganda

Examples of some sorghum varieties grown in Tanzania for regions Dodoma, Mwanza, Shinyaga, and Singida

Sorghum is usually grown as a rainfed crop, sown after the onset of the monsoon season. Seeding rates are often higher than optimum to compensate for poor seed-bed or to allow for unfavourable moisture conditions. All sorghum varieties require a fine seed bed for better seedling establishment. If tractor or oxen are used to open up a shamba, it is advisable to harrow after the first ploughing. When jembes (hoes) are used for land preparation, farmers are advised to ensure that large clods are reduced by breaking them to provide a smooth seed bed. The planting field should be prepared well in advance of sowing. Seed rate is 7-10 kg/ ha or 3-4 kg/acre. Dry planting is highly recommended. Thus plant before or at the onset of rains by either drilling in the furrows made by tractor or oxen plough, or hill plant in the holes made by jembe or panga. When dry planted, planting depth should be 5 cm but when planting in a moist soil use planting depth of 2.5-4 cm. Common row spacing is 75 cm and distance between plants about 20 cm. In semi arid areas where the ox plough yoke is fixed at 90 cm especially in Machakos, Makueni, Kitui and Mwingi districts, the recommended spacing between plants is 15 cm.

Subsistence farmers rarely apply fertiliser, as responses depend on moisture availability, which is usually very uncertain. Under more favourable conditions, farmyard manure is used with advantage, but even so the quantities used are usually below optimum. Optimally sorghum needs the availability of about 20 kg N/ha and 20 kg P/ha at planting time, which can be supplied by alternate cropping with legumes and application of compost or manure. Also intercropping with legumes is recommended with grain legumes such as beans, cowpeas, pigeon peas and green gram. Manure and compost improve organic matter content of the soil, soil moisture retention ability and soil structure. Manure can be broad cast in the field or applied in planting furrows and mixed with soil before seeds are planted. The standard farm wheelbarrow when full holds approximately 25 kg of dry manure/compost. At a low rate, two wheel barrows are enough for a 10 m by 10 m area. This translates into 200 wheelbarrows or 5 tons/ha. When aiming for high rate apply 400 wheelbarrows or 10 tons per ha.

The crop is usually weeded by a combination of inter-row cultivation with animal-drawn implements and hand weeding within rows. Thinning is carried out at the same time as hand weeding, or at intervals during the crop cycle, particularly where thinnings are used to feed livestock. Gapping by transplanting thinnings is encouraged when thinning is done within 2 weeks after emergence and when the soil is moist.

Ratooning is a practice of getting more than one harvest from a single sowing. Two ratooning systems have been identified. One in the bimodal rainfall zones in semi arid lowlands giving 2 crops and the other in the moist mid altitude coffee zones where the local varieties are the two seasons ratooning type. A ratoon crop compared to a newly sown crop has an established root system which will utilizs the available water in the root zone for crop growth early in the season, reduce ploughing and planting labour and avoid migratory quelea birds in August by maturing early.

In bimodal rainfall zones of semi-arid lowlands in Eastern province sorghum is planted in short rains (October- November). When the crop is mature, it is harvested in February and immediately ratooned to take advantage of the long rain season which starts in mid-March. To achieve good yields, the crop is thinned to 2-3 tillers per hill. Weeding and other management practices are done as for a newly sown crop.

Sorghum is usually harvested by hand when it has reached physiological maturity - which means the grain is hard and does not produce milk when crushed. Cut the heads with sickles or a sharp knife from plants in the field or cut the whole plant and remove the heads later. Sun dry the harvested panicles to a moisture level of 12-13 % and thresh and store the grain. For further information on storage, please also refer to datasheets on grains and legumes e.g. green gram click to follow link