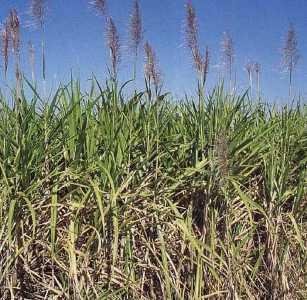 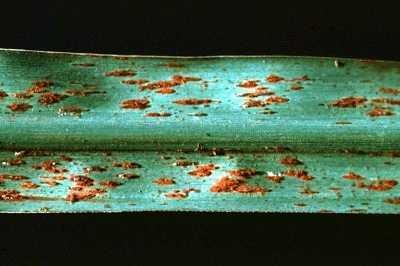 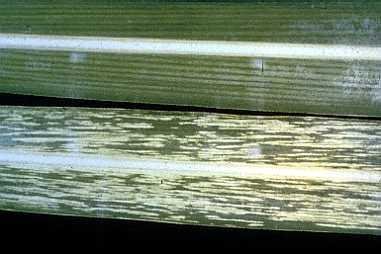 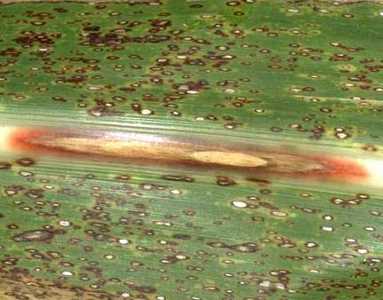 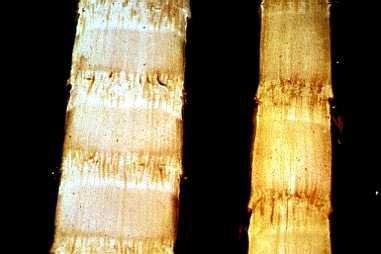 Clavibacter xyli ssp. xyli - Discolouration of the nodal and internodal regions of sugarcane stem due to ratoon stunting disease (RSD).

Sugarcane provides over 50% of the world's sugar requirements as it can grow in any country where it is not exposed to frost. The main product of sugarcane is sucrose, constituting about 10% of the crop. Sucrose is a highly valued food and sweetener but also serves as a preservative for other foods. Moreover, it provides the basis for various food products and beverages.
Sugarcane is chewed in all of the producing countries because of its sweet cell juice. Sugarcane juice is obtained by pressing the sugarcanes, and is mostly used to sweeten foodstuffs, but can also be consumed as fresh or fermented juice. The by-product of sugar production - molasses - is used in distilling alcohol and as an important cattle feed additive. Sugarcane can even be produced to provide motor fuel alcohol or ethanol as is the case in Brazil. Presently, the worldwide theme is on biofuels, and sugarcane is one of the major contenders. Cane tops can be used as livestock feed.

Organic sugar cane is mostly cultivated on small farms of 0.1-3 ha. The work is carried out manually, or with the help of animals. Only ripe sugarcane is cut down during the harvest. Cut off leaves and unripe plants are left on the plot. In this way, the field is never cleared, and the soil is constantly covered by a thick layer of mulch. Such systems make sustainable cultivation of sugarcane possible, also on relatively sloping ground.

Total area in Kenya under sugarcane production in 2014 was 72,181 hectares with a total production of sugar of 6,477,651 tons (FAOSTAT, 2014). The 11 sugar factories in Kenya have a production capacity of 600,000 tons against a national consumption of 800,000 tons.. The deficiency in Kenya, is primarily, due to old technology used in sugarcane companies resulting in high cost of production, and that is why Kenya cannot compete with Sudan. Sudan is one of the biggest sugarcane producers in world and number one in Africa.

Good site conditions are necessary for successful organic cultivation. Under natural conditions, the plant seeks its place in an eco-system amongst the canopy, and therefore needs to reach above the additional crops. Relatively wet conditions tend to cause more difficulties in an organic cultivation system than do sites that are too dry. This is due to a more involved mechanical tilling of weeds, and also to the difficulties the shoots have in developing. Altitudes of 0-1700 m and pH of 5.0-7.0 are suitable.

Ideal site conditions are met with average temperatures of 20 to 28oC and little fluctuation between night and day. The ideal amount of rainfall is around 1500-1700 mm annually, with a drought occurring during harvesting. Harvesting during wet conditions gives a lot of transport problems. The soil should be deep, humus-rich, well aerated and drained. On black cotton soils cambered beds and ditches may be necessary.

Generally, sugarcane is vegetatively propagated with cuttings of mature stalks, and true seed is only used for breeding of new cultivars. Each cutting or seed sett usually has 2-3 buds. The cuttings are put down horizontally and covered with a thin layer of soil. The leaves and top ends of seed cane can also be removed in the field, the buds are then allowed to germinate on the standing cane stalk. When the new shoots have reached a certain length, the cane is cut into setts and planted. These pre-germinated setts are excellent planting material, but vulnerable during handling and transport and very labour intensive to produce.

In contrast to perennial field cultivation of sugarcane, the nursery fields need to follow a strict regime of crop rotation, in order to prevent infestation by soil-borne diseases and pests, such as, e.g., nematodes, sugarcane smut (Ustilago scitaminea) and red rot of sugarcane (Glomerella tucumanensis). In problem cases, treatment of the seedlings with hot water can be effective. Sugarcane smut (Ustilago scitaminea), black rot (Ceratocystis paradoxa) and nematodes can be successfully managed with a 20 to 30-minute hot water treatment at 52degC. Hot water treatment is only economically feasible for nursery stock. Heat treatment even when well done reduces germination percentage and the reduction depends on the variety being treated. Heat treated cane cannot be planted straight into commercial fields for two reasons: its germination is likely to be poor and so much cane would be involved that the treatment would be prohibitively expensive. Heat treated setts are therefore planted in nurseries which are harvested about a year later to provide planting material for the commercial fields.

The seedlings are planted in rows in pre-prepared furrows (furrow depth about 40 cm). On conventional sugarcane cultivations, the average distance between the rows is 150 cm (120 cm - 180 cm). On organic sugarcane cultivations, the best results have been achieved with double rows (40-50 cm gap between 2 single rows and 110-180 cm distance to the next double row). It is necessary to plant legumes between rows of sugarcane on newly developing organic plantations.

Every new plantation should be fertilised with organic material. The organic fertiliser must be well decomposed, so that no fires can be caused by it. It should be spread as near to the plants as possible, so that all nutrients that are released are immediately available to the plants' roots. The broad middle gap between the rows of new plantations is for the sowing of legumes. On farms with enough labour available for the manual harvest, these can be common bean or in drier areas cowpea or other Vigna species.Alternatively white clover is an excellent fixer of nitrogen and covers the soil very well, smothering most weeds.

The beans do not only supply nitrogen, but are also an important source of food, and therefore useful to the economics of the plantation. Foliage of beans or legumes should be incorporated into the soil surface for best nitrogen effect.

Seed setts are planted in a narrow planting furrow, which should have good tillage. They are covered with a thin layer of soil from the inter-row. These planting furrows can be made on flat land or on the bottom of an irrigation/drainage furrow. In wet sites, planting may be on the top of the ridge between the furrows. Irrigation water is usually applied before or immediately after planting. A nursery of one ha is needed to plant 8 to 10 ha of cane.

Recommended varieties for Kenya by zone:

Weed control is carried out manually. Where sufficient labour is available, weeding is carried out at 3-4-week intervals with 3-4 weedings per season.

As sugarcane is a heavy producer of plant material, the soil under continuous ratoon crops need heavy fertilisation in order for yields not to decrease. Phosphorus in the form of rock phosphate or single super phosphate (SSP) should be applied in heavy doses at planting (40-50 bags/ha) and same amount again for each new crop. In organic systems, nitrogen has to come from natural nitrogen fixation of legumes or in the form of compost/manure or slurry, which then also is needed in heavy applications.

Irrigation water, if necessary, is supplied every 2-4 weeks to the cane rows in the case of furrow irrigation, and to the cane on flat land or in small furrows in the case of sprinkler irrigation. When the cane grows taller, more water has to be applied, but intervals between the applications need not always be shortened.
In most cane fields the cane rows are earthed up 1-2 times by hand. In the end the cane stands on ridges separated by furrows. This practice stimulates root growth, consolidates the cane stools and improves drainage on the heavy clay soils. On the lighter textured soils it helps against early lodging of cane and can prevent erosion (if the direction of the furrows is along the contours of the land).

The ideal method is to cultivate sugarcane in a crop rotation system, yet for economical reasons, this is often difficult. Therefore, the good self-tolerance of sugarcane, the planting of legumes, the creation of sufficient compensatory tracts and niches, as well as a comprehensive fertilisation management system all have to help replace a lack of crop rotation on organic cultivations.

On older plantations, a covering layer of legumes can quickly be obtained by sowing directly after the harvest. The seeds and re-growing sugar cane will form a compact, green mass that can be lightly worked into the soil after 3 months, before the seedbed is prepared for the new sugar cane. At sites with a strong growth of weeds, it may be worthwhile planting a second type of fast growing green manure plant. For sowing it may help to break over the sugar cane and afterwards apply one or two sowings of green manure plants. The green manure plants should be competitive, and able to suppress any weeds that may appear. They should be non-climbing varieties, as these would be harmful to the sugarcane.


Sowing legumes in the middle rows

Directly following the harvest, rapid-growing legumes can be sown in between rows. These will die off after the sugarcane has appeared.
In areas with light soils and sufficient irrigation water, cane is intercropped, for example, with maize, groundnut or soybean. In such cases, the intercrops are planted on the ridges and the cane is planted 3-4 weeks later in the furrows. If required, irrigation furrows with a depth of 25-30 cm and a spacing of 1.10-1.30 m are made for hand-cultivated cane.

In Kenya, the planted sugarcane crop is ready for harvest at the age of 14 (coast) - 22 months (higher altitudes) and the ratoon crop at the age of 12 (coast) - 18 (higher altitude) months. Cut the cane as near o the ground as possible as the butt is the sugar-richest portion. To prepare for a ratoon crop, the stems will have to be trimmed down to ground level in order for new shoots to form well from their own roots.
The cane is cut and loaded manually, hand cut and grab-loaded or loaded in bundles by chains pulled by a tractor. Because the sucrose is being decomposed quickly inside the sugarcane, it must be processed relatively quickly after harvesting.

In many sugarcane growing regions, a controlled burning-off of the sugarcane fields is practised. Before the actual harvest, the foliage of the sugarcanes is set alight. Quite often, the sugarcane is again burned down after the harvest, in order to make the field easier to work. However if the fire gets out of control, the problem of too much cane being ready for the factory will occur, as it needs to reach the factory within 72 hours after harvest
Advocates of burning-off argue that: a) an increase in efficiency of sugarcane cutting of around 30% (the work is usually carried out by casual labourers at piece rates)
b) non-burnt sugar cane contains more foreign substances, making sugar processing less efficient.
c) working the soil is not hampered by the mulch layer. The mulch layer hinders the shoots, especially in wet climates
d) pests and diseases are destroyed by the fire and
e) nutrients in the ash are made easily available.


A 'green harvest' of sugarcane on the contrary is to harvest the cane without burning-off, which is practised in some sugarcane cultivation regions. Organic sugarcane cultivation consciously rejects the burning-off method in favour of a "green harvest" for the following reasons:
a) The sugar cane biomass remaining after harvesting is the basis for long-term sugar cane cultivation.
b) Mulch encourages nitrogen fixing.
c) Mulch suppresses unwanted growth.
d) In combination with the measures outlined above, this method helps to improve the humus content and the structure of the soil.
e) The burning-off method causes a high loss of nutrients and energy that is caused by carbon and nitrogen compound gases escaping.