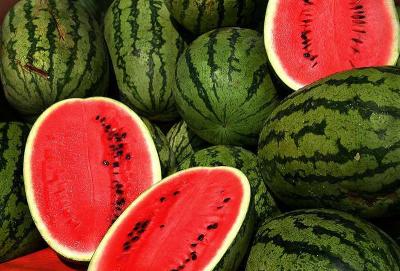 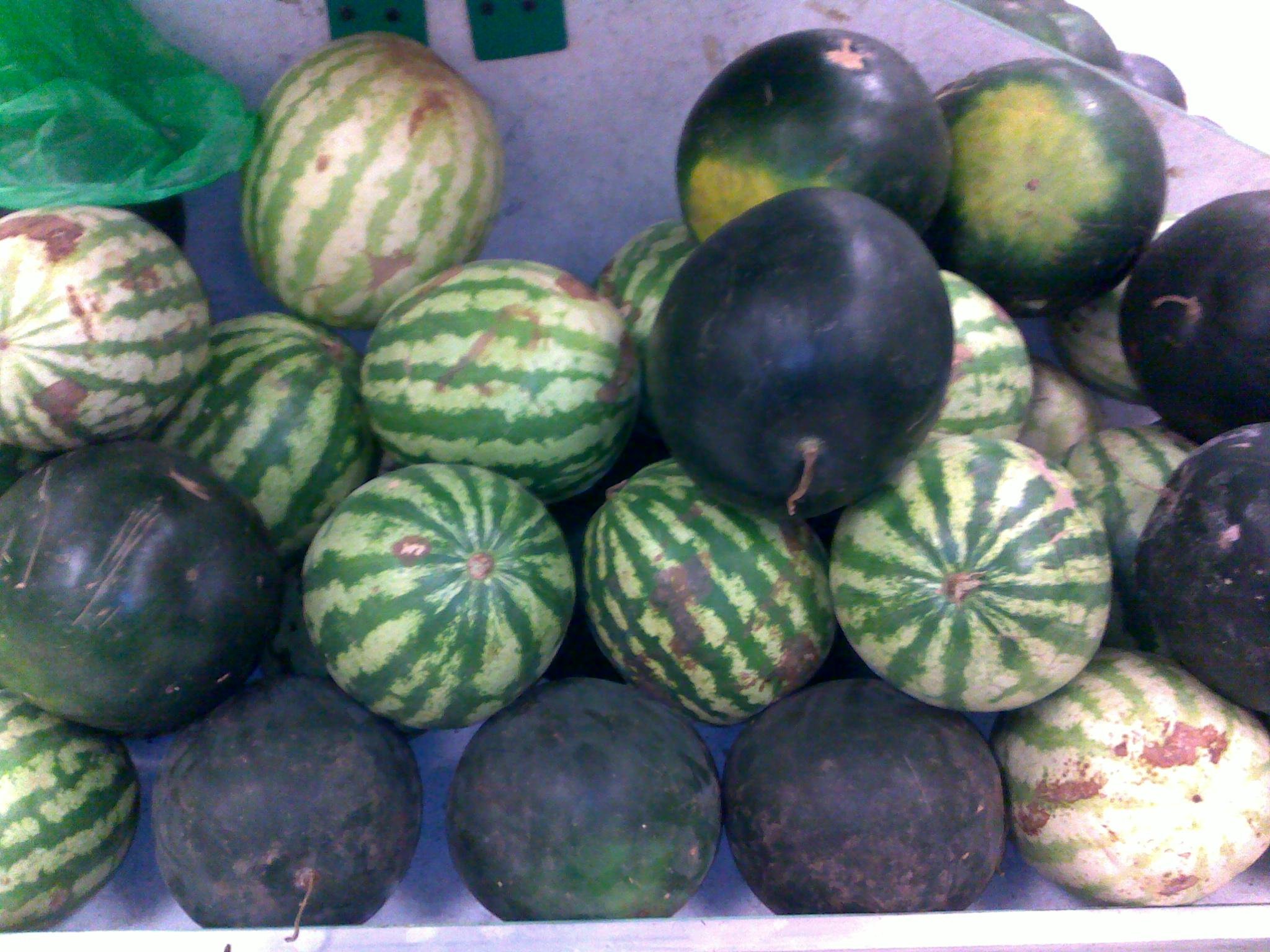 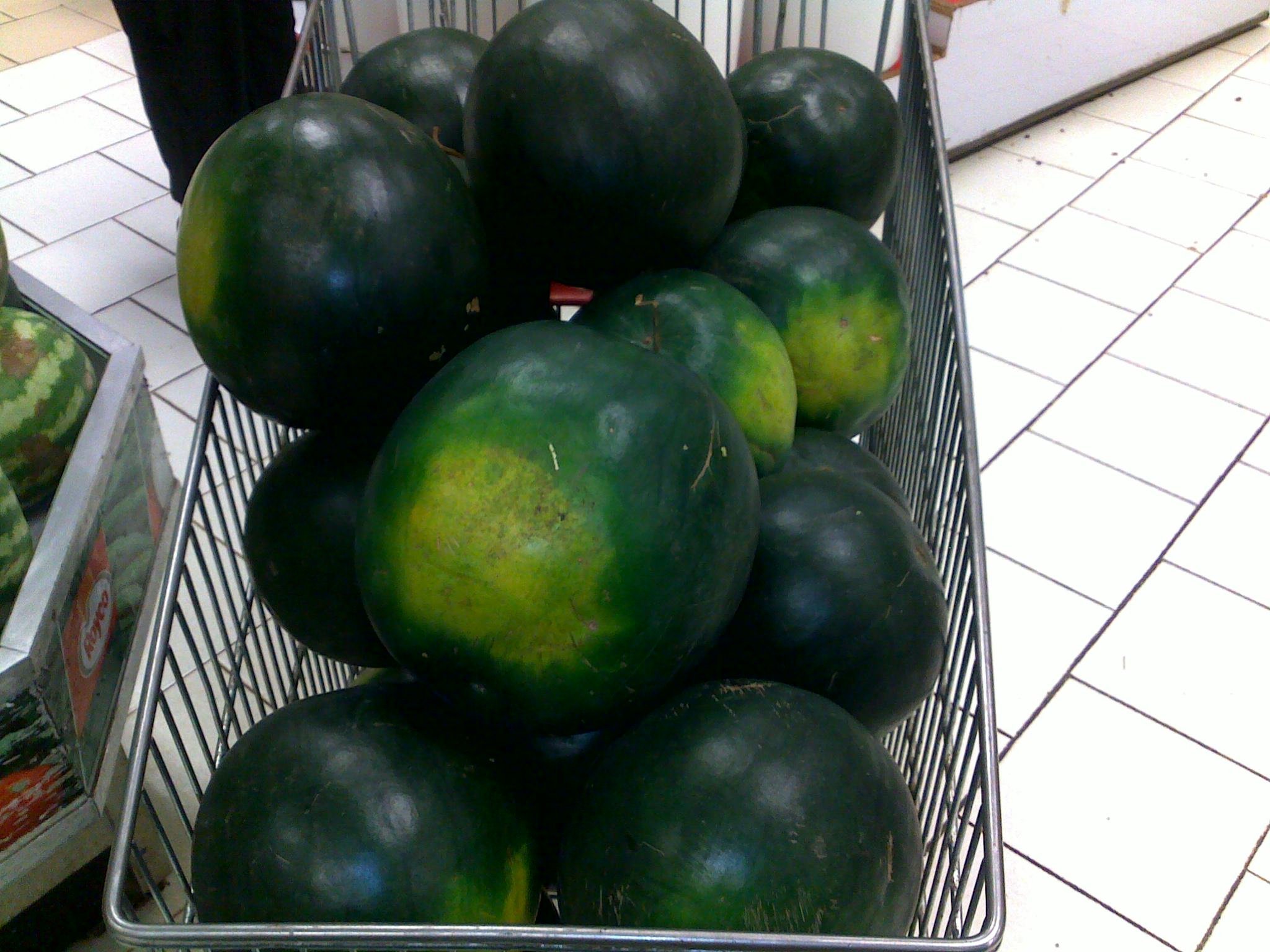 Sugar Baby watermelons in a trolley in a Nairobi supermarket

Watermelon (Citrullus lanatus) is a member of the cucurbit family (Cucurbitaceae), which also includes cantaloupes, cucumbers, pumpkins, squash, zucchini and butternuts. It is indigenous to the dry plains of tropical and subtropical Africa, perhaps in the general area of present day Botswana. It is one of the most widely cultivated crops in the world. Its global consumption is greater than that of any other cucurbit. It accounts for 6.8% of the world area devoted to vegetable production. The principal watermelon producing countries are China, Turkey, Iran, United States and Egypt. China produces over 50% of the world supply. China and Turkey have the largest area devoted to watermelon production. FAO lists watermelon production in 101 countries. Watermelon is a good cash crop in Kenya with very good market opportunities, particularly in urban areas. Gross margin per ha for watermelon variety "Charleston Grey" in Embu area of Kenya is Kenya shillings 138,409 (AIRC, 2003).

Watermelons range in shape from round to oblong or even square as in Japan where farmers found a way to grow cubic (square) watermelons, by growing the fruits in glass boxes and letting them naturally assume the shape of the box. The square shape is designed to make the melons easier to stack and store, but they are often more than double the price of normal ones. Rind colour of watermelons can be light to dark green with or without stripes. Flesh colour can be red, dark red or yellow.

The watermelon is often large enough that groceries often sell half or quarter melons. There are also some smaller no more than 3 kg, spherical varieties of watermelon, both red- and yellow-fleshed, sometimes called "icebox melons" or "mini watermelons"

A watermelon contains about 6% sugar and 92% water by weight. As with many other fruits, it is a source of vitamin C. Notable is the inner rind of the watermelon, which is usually a light green or white colour. This area is edible and contains many hidden nutrients that most people avoid eating due to its unappealing flavour. Watermelons contain a significant amount of citrulline whose beneficial functions are now being unraveled. Among them is the ability to relax blood vessels, much like "Viagra" does to treat erectile dysfunction and maybe even prevent it. Scientists know that when watermelon is consumed, citrulline is converted to arginine through certain enzymes. The citrulline-arginine relationship helps heart health, the immune system and may prove to be very helpful for those who suffer from obesity and Type 2 diabetes (Texas A & M University, 2008).

Because varieties and market trends change all the time, consult your local seed company, buyer or extension officer for the latest information on the available varieties.

Notice, that on some of the Sugar Baby melons there are yellow patches where the melon has rested on the ground. When this patch turns yellow it means the watermelon has reached maturity. It is not wise to harvest much before the patch turning yellow, as unripe watermelons are such a disappointment to buy.

Watermelons can grow at altitudes of up to 1500 m, Best growing areas are the lowlands with high temperatures and relatively low rainfall where irrigation may or may not be necessary

Watermelons grow best on sandy loam soils which are well drained and slightly acid. When planted on very heavy soils, the plants develop slowly, and fruit size and quality are usually inferior. Fine sands produces the highest quality melons when adequate fertiliser and water are provided. Windbreaks are advisable on sandy soils to reduce "sand blast" damage and stunting to young seedlings during strong winds. To reduce the risk of diseases, do not plant on land where cucurbits have grown during the past three years. Well drained heavy soils can also be used. The soils should be rich in organic matter. Watermelon is fairly tolerant to soil pH as low as 5.5. However, a slightly acid soil with a pH of 6.0 to 6.5 is ideal.

Watermelon is propagated by:

Watermelons are grown throughout the year in lowland areas but peaks of rainy season should be avoided. At higher elevations cultivation should be done only during the warmer period of the year. The seed rate is about 3 kg/ha. Watermelon seeds germinate best when the soil is very warm (25-32degC) and the air is almost hot (28 to 33degC), as it is the case at the end of the dry season. Mix plenty of compost or manure into each planting hole; at least one shovelful for each hole. Watermelons like fertile soils high in organic matter. It is recommended that you apply animal manure (e.g. composted poultry manure or cattle dung) up to 10 tons per ha and rock phosphate before or at planting.

The holes are dug at a distance of about one metre within the row and about 2 metres between the rows. Plant 2 seeds per hill, placing them 3 to 4 cm (1.5 inches) deep into the soil. Water the hills thoroughly if there is no rain. At 25-30 cm high earthing up around the plant bases is recommended to prevent exposure to the sun.

For seedless watermelon production, a pollinator variety is required. Use a seeded watermelon variety with a distinctly different shape or appearance from the seedless variety that you are growing. Pollinators can be planted in rows using a 2 to 1 ratio with every third and outside row being the seeded variety.

Watermelons produce separate male and female flowers. Male flowers are produced initially, followed by production of both sexes usually at a ratio of 1 female to 7 males. Watermelon flowers are viable for only one day. Therefore, it is important that an adequate population of pollinating insects (bees) are present every day during the flowering period. It should be noted that watermelon flowers are not nutritionally attractive to honey bees, therefore, blooming weeds or other crops can out-compete watermelons in attracting honey bees. Remove nearby flowering plants to ensure the bees work the watermelon flowers exclusively. Even with sufficient pollinators, it is not uncommon for watermelons to abort flowers. Insufficient pollination results in misshapen melons, which must be culled.

Watermelons, pumpkins, cucumbers, and zucchinis can be planted side by side. Cross-pollination can occur between cultivars of the same crop (e.g. watermelons and watermelons) but not between different crops (e.g. watermelons and pumpkins). Bees are necessary for pollination. Bees need to be present and active in the crop. If bees are not plentiful, then place at least 2 hives/ha, spreading them around the field perimeter and check to ensure that male flowers are producing pollen. Flowers are most receptive to pollination during the morning hours when bee activity is usually the highest. Bee activity is related to climate and is lower in cooler weather. Spraying and irrigation should be coordinated to occur when bees are least active

After planting, water regularly with plant or manure tea to provide additional nutrients. Well-filtered teas can also be used in a drip irrigation system. There are three critical periods where watermelons need sufficient moisture:

Weeding should be done regularly to keep the field clean. Avoid injuring the plants when weeding.

Remove misshapen and blossom-end rot affected fruits to promote additional fruit set and better size of the remaining melons. If a market demands larger melons, remove all but two or three well shaped melons from each plant. To avoid disease spread, do not prune melons when vines are wet.

Watermelons can be rotated with cereals, legumes or cabbages

Harvesting usually begins 3-4 months after planting. Maturity is sometimes difficult to determine. Useful maturity indicators are listed below, however it is still advisable to cut open a few fruits to check maturity before harvesting commences. The watermelon stem should be cut rather than pulled from the vine to avoid damage to the stem end. Do not stack fruit on their ends, as this is where the rind is thinnest. Maturity indicators include:

Ensure minimum handling of melons, as extra handling is expensive and may harm the fruits. Watermelons do not store well as they are susceptible to chilling injury, and are subject to decay at higher temperatures. Under the ideal conditions of 70C and a relative humidity of 80 to 90 % melons can be stored for up to two weeks.

Spongy end occurs in melons, which have been poorly pollinated. These melons may turn yellow and drop off the vine early in their development or partly develop with the stylar end soft and spongy. This area is also slightly pointed. Internally, there is very poor seed development at the spongy end.

White heart is white streaks or bands of undesirable flesh in the heart (center) of the fruit. This is caused by excessive moisture (and probably too much nitrogen) during fruit maturation.

Hollow heart is a disorder that varies among varieties. Causes are unknown.

Sunburn occurs most frequently in varieties that have dark green rinds. "Charleston Gray" types and other melons with grey-green rinds rarely sunburn. Good healthy foliage will minimise sunburn as well as favour good yields and quality. Strong winds can blow unprotected vines away from the developing fruit along the edges of the rows and cause full exposure of the fruit to the sun.

Rind necrosis is an internal disorder of the watermelon rind. Symptoms are brown, corky, or mealy textured spots in the rind which may enlarge to form large bands of discolouration that rarely extend into the flesh. Experienced pickers often can detect affected melons by the subtle knobbiness that is visible on the surface of affected melons. The cause of rind necrosis is unknown. Bacterial infection has been reported to be a cause, although similar bacteria are found in healthy melons. Drought stress also is reported to predispose melons to rind necrosis.