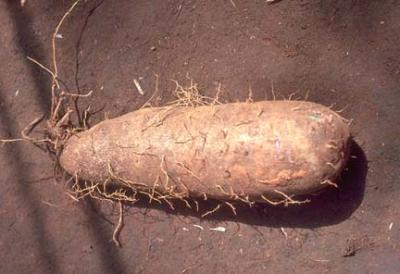 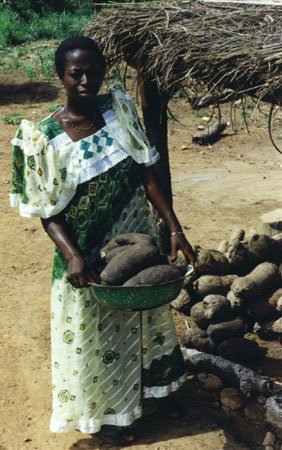 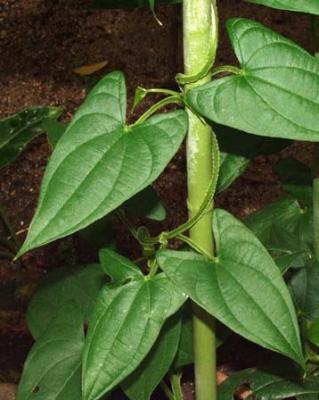 White Yam is native to Southeast Asia and is grown in practically all parts of the tropics where it except in parts of Africa, it is the predominant kind of yam.
West Africa is the most important area for yam production in the world. Over 90% of global yam production comes from this region. Nigeria alone produces about 68% of the world's yams, followed by Cote d'Ivoire, Benin, Ghana and Togo. Within West Africa, production occurs in the northern forest and southern savanna zones. Further north, the rainy season is too short, and further south the soils are waterlogged and there is too much cloud cover for economical yam production.

Elsewhere in Africa and in the rest of the tropics, the white yam (water yam) is the dominant yam species. Significant quantities are produced in Democratic Republic of Congo, Ethiopia, the Central African Republic and Sudan.

Yam is a preferred food security crop in the drier areas of Kenya. One plant is reported to be able to produce 1 full 90 kg bag of tubers, which can be harvested a few at the time for home consumption or sold in the market for a good price. Many families in Kenya plant yam near the trees in the shamba (farm), so they can get support for climbing vines.

The tubers and larger bulbils of white yam are consumed as a starchy staple, after cooking in various ways. They can be processed into yam flakes or yam flour. Their use as a source of starch is minor.

White yam is a plant of the subhumid to humid tropics but also does well in semi-arid regions, in fairly light soils. Reported temperature range for growth is 14-40degC with the optimum between 20-32degC or 25-30degC. The growth is considerably retarded at temperatures below 20degC.
Since it requires 7-10 months to mature in the field, it is essential that the rainy season lasts at least as long, unless supplementary irrigation can be provided. A well-distributed rainfall (or water supply) of 1500 mm per annum is adequate for yam production. However, dry spells of up to 1 month during the growing season do not severely reduce yields. It is occasionally grown in high rainfall areas in East Africa. Reported annual rainfall range for growth is 700-8000 mm with the optimum between 1200-4000 mm.

It is mostly a crop of the lowlands, though it occurs at elevations of up to 2500 m (in India). It tolerates poorer soils than most other cultivated yams. White yam is sensitive to aluminium toxicity in the soil.

It thrives in deep, fertile, well drained, loose, loams and sandy-loam soils with low levels of salinity. It responds well to manuring. However, compared with other tropical tuber crops, yams require soil of high fertility. Heavy clays tend to be waterlogged and result in tuber rots and difficult harvesting. Gravel or rocky soils tend to hinder tuber penetration. Reported soil pH range for growth is 4.8-8.5 with the optimum between 5.5-6.5.

Tuber dormancy lasts for 2-4 months after harvest. Small intact tubers ("seed tubers") or tuber pieces weighing 50-500 g are used for planting on mounds, ridges, or on the flat. Intercropping is the most common practice, with the distance between yam plants determined by the number and types of the other crops in the field. Where sole cropping is done, rows are 1 m apart, with intra-row spacing of 50-100 cm.

Plants are usually staked soon after emergence. Unstaked cultivation, which suppresses weeds better but gives lower yields, is also practised. Weeding is done 3-4 times during the season, using hand tools. In general, yam is the first crop in the rotation after fallow.

Harvesting occurs 7-10 months after planting. Hand tools are used to dig up the tubers. Although the tubers can be kept quite well, they are easily damaged during and after harvest, and must be handled carefully to avoid bruises. They are stored in cool shady conditions. Tubers can be processed into yam flakes or yam flour, or marketed fresh.

The greater yam beetle (Heteroligus meles) attacks the tubers. Adult beetles eat the planting setts and plants may wilt and die. The holes in tubers reduce market value.Scale insects and mealybugs may infest the tubers, especially during storage.

Nematodes attack the plant, resulting in warty appearance of the tuber.

Wild animals such as pigs and rodents may destroy the crop in some locations.