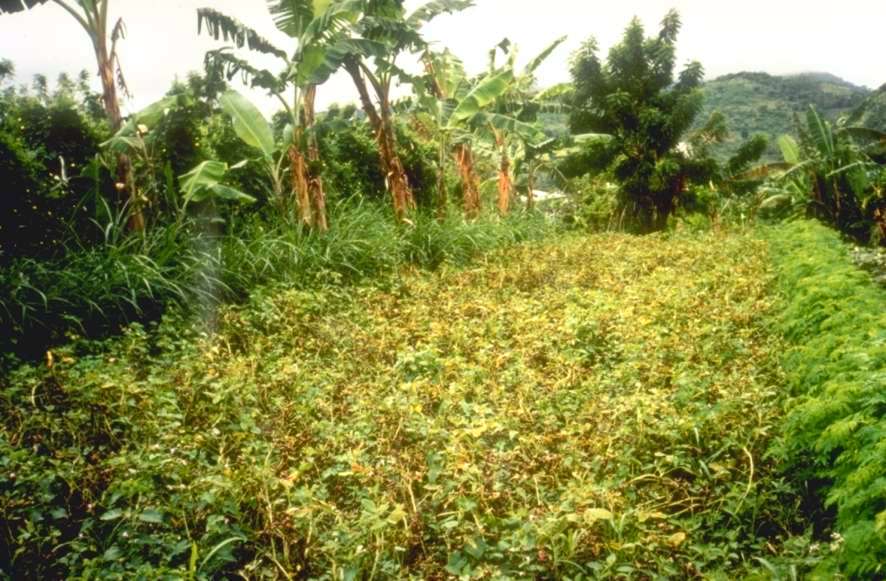 Green manure is defined as a crop  that is grown and then intentionally plowed under to improve the underlying soil while green or just after flowering.

In smallholder agriculture, green manure legumes can play a major role in conservation agriculture and improve farm productivity. They are fast growing, hence accumulates high biomass within a short period. They can increase plant nutrient supply in the soil especially nitrogen through biological nitrogen fixation and improve crop yields. They are deep rooting and thus lead to improved soil structure and recycling of nutrients. They provide good ground cover, which minimizes soil erosion through reduction of raindrop impact and runoff and improves soil physical properties. They smoother weeds, even the obnoxious ones like Striga hermonitica, thus reducing labour for weed control. They are an important source of human food and livestock feed.
The Legume Research Network Project was started in 1994 (by then known as the Legume Screening Network) to evaluate and identify suitable legume species for different agro-ecological environments and to subsequently incorporate the "best bets" into the existing farming systems. Initial network activities included screening of about 40 legume species, among them, green manuring species, food legumes and forage species, in 11 sites across Kenya, especially where soil infertility had been identified as a major problem for crop production. Over the years, the network extended its activities to cover research on legume residue management, integrated nutrient management, livestock feeding studies and to assess the value of the legumes in controlling striga (Striga hermonthica), a noxious weed common in western Kenya.
Presented in this datasheet are the best-bet green manure legumes for the different agroecological zones in Kenya, research highlights of potential benefits of the legumes, potential niches for GM legume technologies including cropping systems for incorporating the legumes into smallholder farms.

In the following descriptions of different legumes yield is given in t DM. This means tons of dry matter. N content in leaves is given in percentage.
It is therefore possible to calculate how much nitrogen a well grown cover crop will add to the soil as follows:

Example - Crotolaria as given below:

Time to maturity 3-4 months
Biomass yield 8 t DM ha-1. within 3-5 months
N content in leaves 3.6 - 4.7%
8 tonnes=8,000 kg. about 4 % of 8,000 kg =320 kg N per hectare if the whole crop is incorporated into the soil. This is a lot - most crops need less than 100 kg/ha of Nitrogen to grow well. So this type of green manure yield allows for partial harvest before incorporating the rest of the crop as green manure into the soil

Higher maize yields are obtained by combining green manure legume with FYM and inorganic N. Combining green manure legume with inorganic fertilizers saves on fertilizer requirement (Figure). Application of 15 kg N ha-1 to the GM treatment increased maize yields by 38%, but doubling the N rate only increased yields by an additional 3%. On the other hand, maize grain yield in FYM treatments only increased by 4% after application of 15 kg N ha-1, while doubling the N rate to 30 kg ha-1 increased yield by 23 %. These results suggest that maize grain yield can be greatly improved by integrating GM, FYM, and inorganic nitrogen.
Green manure legumes can increase plant nutrient supply in the soil. Incorporating mucuna biomass (4 - 11 t DM ha-1) into the soil increased maize yields by between 40 and 120% in five Network sites. The additional labor required for incorporating mucuna into the soil was compensated by increased maize yields.

A study was conducted from 1998 short rains to 1999 long rains to evaluate the effectiveness of green manure legumes inter-cropped with maize in controlling soil erosion. In 1999 long rains when the legume was establishing, soil loss was almost similar in all treatments (see table). At the onset of the SR 1999 there was post-harvest crop cover from the 1999 LR season and this dramatically reduced soil loss in the first two weeks of the rains (see Table and photo). Another major result is that eroded sediment contained higher levels of organic C, total N, available P, and K than the original soil surface confirming that erosion removes soil particles enriched with plant nutrients.

Table: Cumulative soil loss (t ha-1) and percent crop cover two weeks after the on-set of the rains during the experimental period.

Leaving legume biomass on the surface as mulch gave better yields than incorporating it into the soil in the Machakos site, which is in semi- arid environment region. This was attributed to an effect on moisture conservation.

Dairy cows fed on mucuna and lablab forage had a daily DM intake of about 9.2 kg cow-1, which was similar to cows fed on Gliricidia sepium forage, a proven fodder tree for the coastal Kenya. Milk yield (6.5 kg day-1) was only 8% less than that produced by cows fed on gliricidia forage.
Goats supplemented with Neonotonia weightii gained on average 16.37 g while those on basal diet alone lost 23.81g daily in Katumani, Machakos.

Intercropping of green manure legumes with maize is feasible for the regions receiving bimodal rainfall where farmers plant two maize crops in a year. In this system green manure legumes are either planted at the same time with maize or planting is delayed by one to two weeks to reduce competition. The legume is planted in between maize rows. After the maize is harvested, the legume is left to continue growing during the short fallow period preceding land preparation for the following crop. As the land is prepared, the legume biomass is incorporated into the soil.

In the regions receiving unimodal rainfall, the only maize crop of the year is usually planted in April. The legume green manure system for such a region requires that legumes are planted in August between maize rows and that lower maize leaves are pruned to reduce competition for light. The maize is harvested in November/December and the legume is left growing in the field as short-term fallow until land preparation for the long rainy season maize crop. This system suits sites such as Kitale.

Some farmers indicated that legumes could be intercropped with vegetables like kales. Crotalaria was most preferred for this purpose because it grows upright and does not coil on the kale plants.

Regions that receive bimodal rainfall but have an unreliable second season or where farmers do not grow maize during the second season are suited for a rotational system. The maize crop is planted as a pure stand during the long rains in February/March and harvested in July/August. Green manure legumes are planted in September as a short-term fallow crop and incorporated during land preparation in January/February of the following year. This system is practiced in areas like Kakamega.

Lablab purpureus var. Rongai has been tested successfully as a cover crop for conservation agriculture in the dry Machakos district Kenya. Lablab established well and provides complete ground cover in three months. The legume is left on the surface as mulch. During planting of maize a furrow is created in the mulch for direct planted of the seed (photos below)
.

Green manure legumes are planted in plantation crops to provide ground cover for control soil erosion and weeds. Examples are given here.

Cover crop as a nurse crop for establishing plantation crops