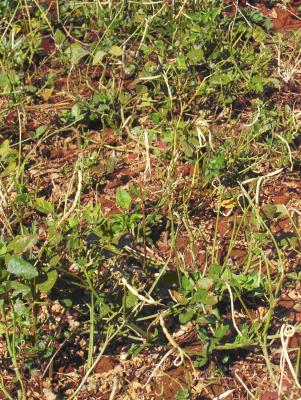 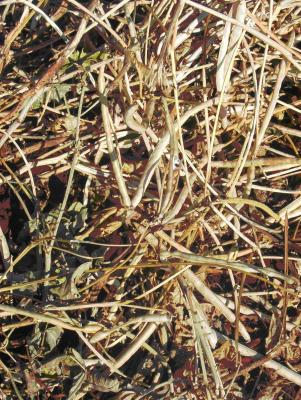 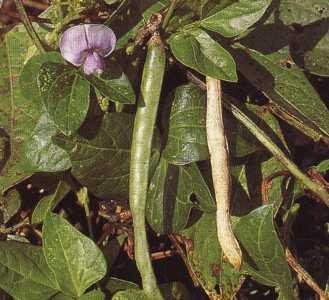 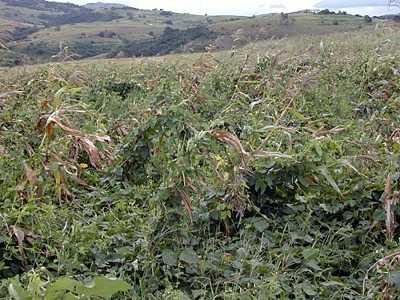 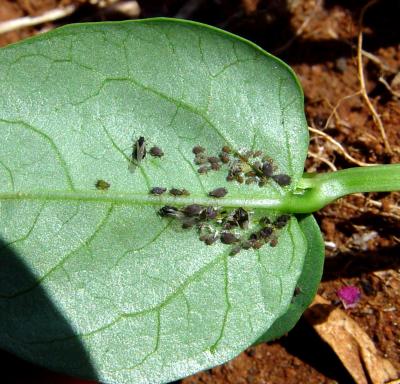 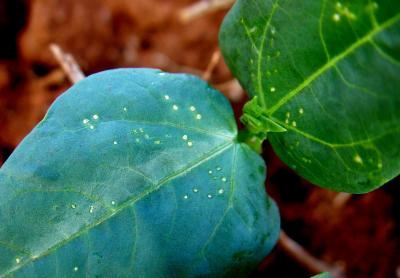 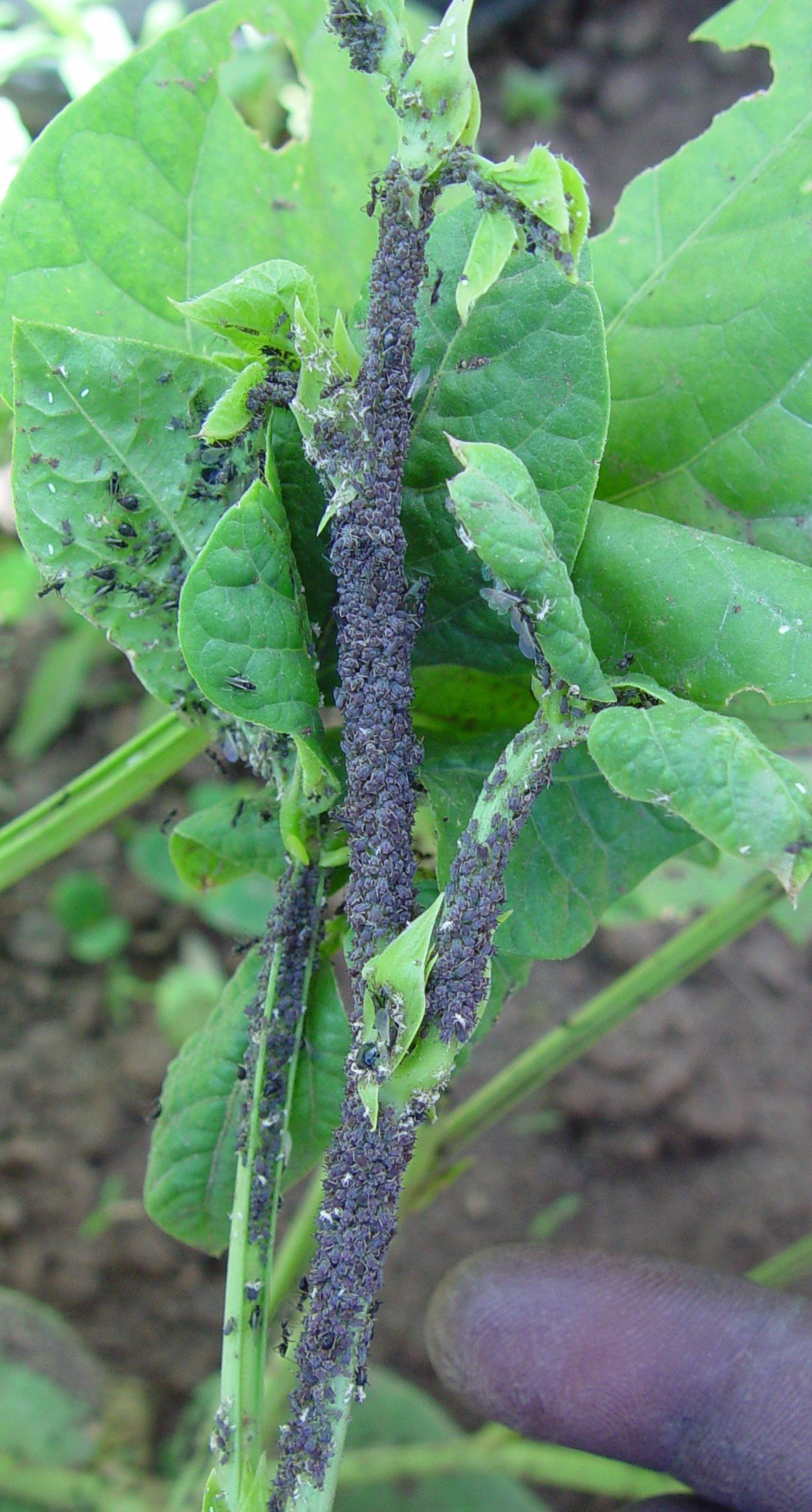 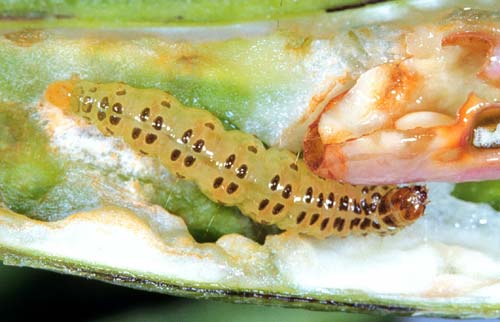 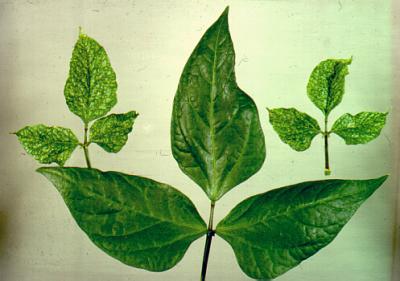 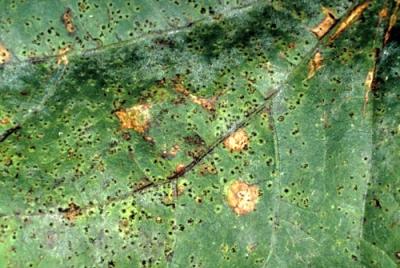 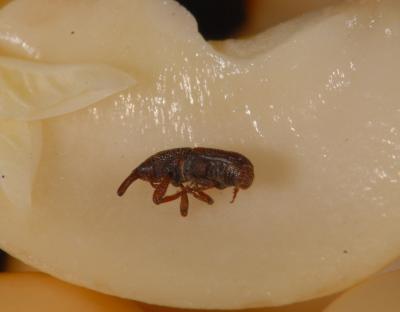 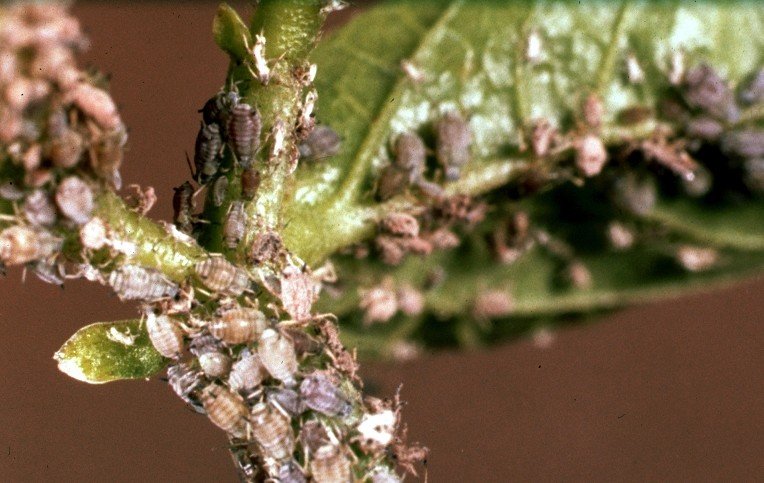 Black legume aphid (Aphis craccivora) is a relatively small aphid. Immatures are slightly dusted with wax, adults without wax. They are about 1-2mm long.

Cowpeas are basically annual crops grown for their leaves and seed. The growth habit is climbing, spreading or erect and they belong to the bean family (Leguminosae) (Papilionaceae). Cowpeas are native to Africa where they were domesticated over 4000 years ago. The crop exhibits much variation in growth habit, leaf shape, flower colour and seed size and colour.Cowpeas are mainly important in the marginal rainfall areas because they are well adapted to dry climate and suitable for a variety of intercropping systems. Cowpeas are cultivated for the seeds (shelled green or dried), the pods or leaves that are consumed as green vegetables or for pasture, hay, silage and green manure. Tender cowpea leaves and shoots contain 4% protein, 4% carbohydrates and are rich in calcium, phosphorus and vitamin B. Dried seeds contain 22% protein and 61% carbohydrates. The leaves may be dried and stored for later use. Cowpeas that are sprayed with pesticides should not be eaten as leaves unless pre-harvest intervals are followed. In Africa, where cowpeas are the preferred food legume, they are consumed in three basic forms:

Cowpeas are generally tolerant to drought and low light conditions, but are very susceptible to a variety of insects and diseases and do not do well in poorly drained and cool areas. Local land races of cowpeas grown by farmers in West Africa are well adapted so that they start to flower at the end of the rains at a particular locality. The optimum temperature to their growth and development is 20 to 35degC. Cowpea can grow in a wide range of soils, well adapted to light sandy soils where most other crops produce poorly, and they do well on acid soils. On heavy fertile soils they show a vigorous vegetative growth, but not necessarily a good grain yield. Most varieties need a minimum rainfall of 200 mm during a growing season.

Cowpeas seeds are planted about 20 to 40 cm apart and are often grown as an intercrop with pearl millet, sorghum or maize at wide spacings (total plant population 10,000-20,000 plants per ha). When produced as a green vegetable, they are commonly grown as a monocrop in rows 30 to 40 cm apart with 8 to 12 cm between plants. Some very drought resistant types may grow for two seasons in the farm. Tillage normally follows the crop with which cowpeas are interplanted. When sown in rows the seed-rate is 10-40 kg/ha.

Cowpea varieties and their characteristics:

Examples of cowpea varieties in Tanzania

Examples of cowpea varieties in Uganda

Most cowpea crops are rain-fed, a few are irrigated and others use residual moisture in the soil after harvest of a rice crop. Cowpeas are particularly well suited for rice-based cropping systems. Two to three weedings during the first 1.5 months after planting are recommended. Losses due to weeds can be 30-65%. Parasitic weeds, such as Striga gesnerioides (Purple withweed), generally associated with continuous cropping of cowpeas in Africa, may also cause severe damage.One additional benefit of cultivating cowpeas is their ability to fix atmospheric nitrogen in root nodules through symbiosis with Rhizobium bacteria that are common in most soils. An effective cowpea-Rhizobium symbiosis fixes more than 150 kg/ha of N and supplies 80-90% of the total N required. Inoculation may be advantageous, if the crop has not been grown for many years. In general, no fertilisers are applied. Cowpeas are commonly incorporated in crop rotations in semi-arid, humid and subhumid environments. A cowpea crop of the leafy types grown before a maize or millet crop and incorporated green into the soil, can produce a good grain crop without any addition of more nitrogen. Intercropped cowpeas also share nitrogen with the other crops e.g. maize, millet, sorghum and cotton). For intercropping choose a cowpea variety carefully - the spreading types may over power other crops such as cotton by entangling their branches and interfering with fieldwork. Cowpeas do not normally respond to nitrogen or phosphorus fertilisers, so none need adding. However where soils are highly eroded an application of 5 tons/ha of dry compost or manure is beneficial. Weed during early stages of crop, later the cowpeas will cover the ground and suppress weeds including purple witchweeds. Two weedings are recommended, one two weeks after emergence and the second weeding just before flowering. 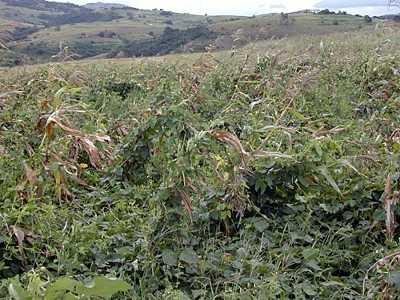 Leaves for eating must be young and tender. Three leaf pickings (starting 2 1/2 -3 weeks after planting at weekly intervals have little effect on grain yields of five to six 90 kg bags of seed per acre. Green pods are harvested by hand when they are still immature and tender (12-15 days after flowering). When grown as a grain, harvesting is complicated by the prolonged and uneven ripening of many cultivars. Time of harvesting is critical as mature pods easily shatter, so hand-picking can be advantageous. Sometimes plants are pulled when most of the pods are mature. For hay, the crop is cut when most of the pods are well developed. 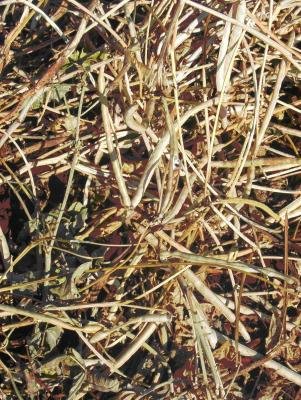 Leaves and seeds widely used as food. Some communities grow cowpeas mainly as a vegetable (Luhya). Young leaves are often cooked with Potash. The vegetable may be cooked alone or with other vegetables, mainly Corchorus olitorius and C. trilocularis (mlenda). The leaves are cooked with Corchorus spp. Leaves, milk and butter added and served to breast feeding mothers (Luo). Leaves are normally eaten with ugali or mashed with maize and potatoes or other pulses (Kikuyu). The seeds may also be boiled and eaten alone (Luo) or mashed and butter added.  Cowpea leaves may be dried and stored for several months. Cowpea is a major leafy vegetable among the Mijikenda, often mixed with leaves of sweet potato, cocoyam, pumpkin and Corchorus olitorius.

It's a good animal fodder, roots are reportedly very poisonous