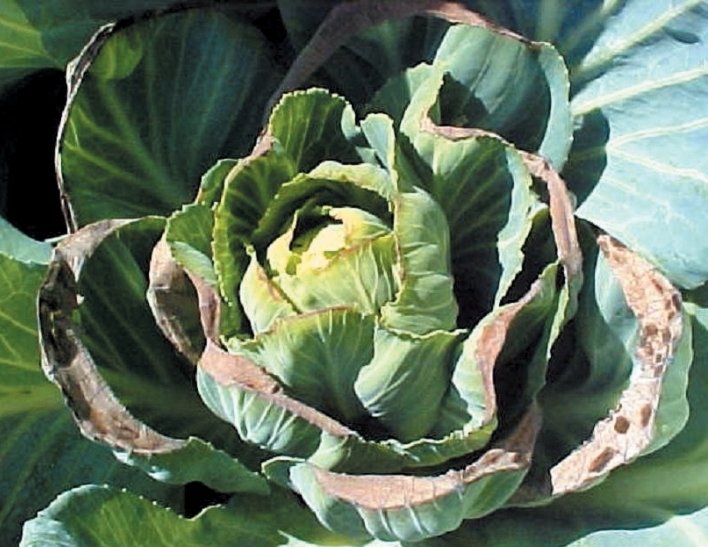 Calcium deficiency in cabbage exhibits characteristic "tip burn" at tips/edges of the leaf. Leaves are deformed and cabbage head will not form if supplemental calcium is not applied. Cupping of leaves is typical.

Proper nutrition and water are the foundations of crop health and therefore its pest and disease status. If there are shortages of particular nutrients, or the soil pH (acidity/alkalinity) is wrong, the crop may not be able to grow well.

This datasheet gives an overview on how plants are given optimal nutrition and water and on how competing weeds are controlled.

An often quoted first rule of sustainable and organic agriculture is 'Grow a Healthy Crop' and proper nutrition and water are the foundations of crop health and therefore its pest and disease status. If there are shortages of particular nutrients, or the soil pH (acidity/alkalinity) is wrong, the crop may not be able to grow well.

Also, if weeds are not controlled they tend to outcompete vegetable crops for these valuable resources. Farmers should enquire with Kenya Plant Health Inspectorate Services, Kenya Agricultural Research Institute or private companies for testing soils for acidity and nutrients and then take steps to correct deficiencies and problems. An excess of nutrients can also have unwanted effects including stimulating weed growth. For example, if too much nitrogenous fertilizer is used on brassicas, they can become very soft and sappy and susceptible to sucking pests. Water can also have a major influence. Heavy rainfall or overhead irrigation can have positive effects in washing off pests such as caterpillars and aphids, but can have negative effects in encouraging fungal and some bacterial diseases.

In organic farming artificial fertilizers which can easily be dissolved in water are not allowed:

Calcium and magnesium also affect what we call soil pH, or soil acidity. Apart from being plant nutrients, these two elements are added when the soil is too acidic for plants to grow well. We put lime on the soil. Some crops like potatoes do not like very much lime. The way the figures in the table above are derived, are based on analysis on content in mature crop plant tissue. It reflects more how much a crop is able to absorb, than what it actually needs for balanced growth.

Such tables can be used to see which crops are heavy feeders and which ones need acidity and which ones do not. Most of the time animal manure contains all the micro nutrients, but sometimes when the land on which animals graze is deficient in something, also the manure these animals make can have low content of some micronutrients. Composts and manures mostly contain all the plant nutrients needed.

Nitrogen is the element that plants require in greatest amounts. It is the most important-yet the most often deficient-element in plant growth worldwide. Nitrogen is essential to the photosynthesis and healthy cell growth and reproduction. It is vital in producing chlorophyll (which gives the leaves good green color) and amino acids. It also promotes shoot and leaf growth.

Nitrogen deficiency in maize causes yellowing of older leaves, progressing upward. In young maize plants, nitrogen deficiency causes the whole plant to be pale yellowish green with spindly stalks. In organic farming commercial nitrogen fertilisers are not allowed but legumes can be grown that fix nitrogen directly from the air at no cost except the seeds. Legumes seeds such as lucerne, beans, peas, clover, vetch and many others which fix nitrogen from the air are available. Many of them can be used for interplanting between various crops to help supply nitrogen. Also many legume trees can help fix nitrogen if planted in rows between crops.

To ensure the soil microorganisms are able to fix the nitrogen from the air, air must enter into the soil. If the soil has a hard surface and is compacted or eroded this cannot happen. So a healthy soil must be soft and full of airholes. This is normally the case when the soil is shaded, mulched or covered with crops.

If the farm has animals it is a good idea to grow one crop of pasture like lucerne to cut for these animals. While growing the legumes will fix nitrogen. Some will be used as animal feed. When ploughing in the legume before another crop a large amount will still be left in the soil to be used by following crops. This is then called green manure.

Phosphorus is required for cell growth and plant reproduction, and is crucial for flower and fruit formation. Too little phosphorus can result in stunting, but too much can cause bitter flavor in crops. Symptoms of phosphorus deficiency are often mistakenly attributed to viral diseases.

Phosphorous is found in soil particles in animal manure and plant tissue. It is not easy to dissolve in water, so plants often miss phosphorous if the level of organic matter in the soil is low.

Healthy soil which is rich in organic matter contains some fungi called mychorrhiza which attach themselves to many plant roots and help the roots extract (pull out) phosphorous from the soil. The only plants that do not have mychorrhiza on them in organic soils, are plants from the cabbage family. In conventional soils mychoirrhiza are often either absent or very few, as they do not develop with large amounts of added phosphorous salts in the soil. Mychorriza are very useful microorganisms, and need to be fed properly with organic material to digest.

The above table shows very large uptake of potassium by many crops. Plants take up large amounts of potassium when available because they can, not always because need it. But plants do need potassium in fairly large amounts. Potassium can easily move within the plant, so symptoms of deficiency will appear on old leaves first as the plant tries to continue growing. So old leaves will start getting yellow spots followed by wilted leaf margins and tips. Sometimes the leaves start curling up. Potassium can be found in wood ashes, plant tissue, urine and manure. The African soils do not have large amounts of potassium, as it easily washes out with rain.

Calcium is needed for cell division and plant growth. Its buffering characteristics are critical to soil balance and largely determine the availability of other nutrients. Lack of calcium results in yellow or pale leaves, and causes blossom-end rot on tomatoes and peppers. A deficiency in beans causes yellow leaves with curling margins, stunted plants, and blackened, dying shoot tips. Deficiency causes brown-tipped leaves on cabbage, forked roots in beets, and unusually small potatoes.

Unless soils are deficient in one or more micro nutrients, organic farmers do not need to over worry about them. If enough organic waste is returned to the soil, also the micro-nutrients are supplied.

Deficiencies are common, for instance all Rift Valley soils in Kenya are more or less deficient in copper. If organic waste is used this is not easy to see, but conventional wheat and barley farmers have to treat their seed and later on spray copper onto the crops to be able to harvest good yields. Selenium is another mineral that can sometimes be deficient.

Selenium deficiency has an impact on fertility of animals, so if the deficiency is serious, the animals will have trouble becoming pregnant.