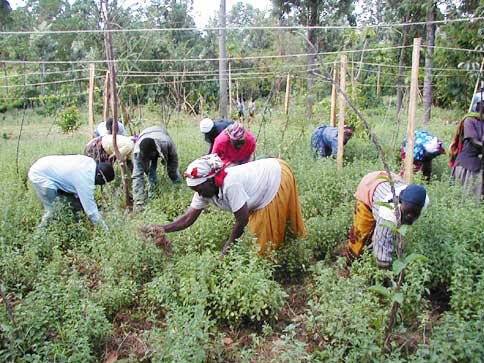 Ocimum kilimandscharicum is one of the species of the genus Ocimum plant that is native in East Africa and was introduced and cultivated in India and some parts of Turkey. It is an evergreen aromatic perennial under shrub belonging to the Lamiaceae family. It thrives as a natural rounded woody shrub that can reach 2 m high in warm temperate regions of the tropics but can be propagated both by seeds and vegetatively.

The plant has pubescent quadrangular branchlets with simple leaves that are opposite and oblong, narrow at the base and deeply serrated (Warrier, et.al., 1996). The leaves contain aromatic oils, which is the essence of the plant. The essential oil is extracted using distillation, expression or solvent extraction methods. The oil constitutes liquid oil and white solid crystals, where the pure crystals possess a characteristic odour and taste of natural Camphor.

a) Seed selection and preparation

The site selected for raising a nursery should be convenient enough to:

The site should be free from contamination and too much manure.

d) Sowing the O.kilimandscharicum seeds in the seedbed

Traditionally, extracts of Ocimum kilimandscharicum were used to alleviate many ailments in East Africa including treatment of colds, coughs, abdominal pains, measles, diarrhea, insect repellent, particularly against mosquitoes and storage pest control (Kokwaro, 1976; Hassanali, et.al. 1990. The Herb Society of America; Golob et al. 1999). Toxicity and protectant potential of Camphor has been found to work against product beetles (Ofori and Hassanali, 1998). Research undertaken on the plant's medicinal and insecticide efficacy classifies it as an aromatic plant whose bioactive properties can find use in pharmaceutical, aroma therapeutic and pesticide industries (Bekele and Hassanali, 2000; Bekele, et.al., and Nyamasyo, 1995; Deogun., 1961-62). The low boiling point of the oil may be used as a solvent for metallic lustres on ceramic bodies (Chowdhiri and Haksar, 1959).

Kilimanjaro basil has many different uses, some of them are:

Dried leaves and essential oil extracts are used as a grain protectant. A 100% mortality was observed in adults of the maize weevil (Sitophilus zeamais), the lesser grain borer (Rhizopertha dominica) and the Angoumois grain moth (Sitotroga cerealella) exposed for 48 hours to dried ground leaves and essential oil extract at doses of 25 g and 0.3 g per 250 g of grain respectively (Golob et al. 1999).

To minimise the uncontrolled collection and sale of large quantities of plant materials from the forest, which leads to the destruction of many forest plants, a project was started to support sustainable utilisation of medicinal plants (including Ocimum kilimandscharicum) in the Kakamega forest in Kenya. Harvested leaves of O. kilimandscharicum are being used in the production of essential oils for the manufacture of aroma therapeutic products.

O. kilimandscharicum oil is the main ingredient used in the manufacture of two Naturub(r) range of products (balm and ointment) that were developed by International Centre of Insect Physiology and Ecology (ICIPE), University of Nairobi (UoN) and Kenya Wildlife Service (KWS) and produced for Muliru Farmers Conservation Group Enterprise (MFCG). The balm is used to alleviate colds, flu, insect bites and muscular aches while the ointment is used for the fast relief of muscular strain, rheumatism, arthritic joint, fibrositis, bruises, lumbargo, neuralgia and sciatica. Naturub(r) is certified and registered as the first natural product by the Pharmacy and Poisons Board of Kenya - it is sold widely in corporate retail chains in Kenya.

The most notable pests are termites, which attack the plant roots after the first harvest due to the handling disturbances.

The attack is random based on the extent of disturbance per plant.

When they attack, alkaline ash is sprinkled around the seedbed furrows. This deters the termites from attacking.