Busseola fusca is a common pest in many African countries throughout sub-Saharan Africa. In East Africa it occurs at altitudes of 1,000 to over 2,700 m while in Central Africa it is the predominant pest across all altitudes. In West Africa, it is only common on sorghum in the dry-hot zones.

Busseola fusca is indigenous to Africa. Its distribution and pest status varies with the region. In East and southern Africa it is a pest at higher altitudes (above 600 m), but in Central Africa it occurs from sea level to over 2000 m, while in West Africa it is primarily a pest of sorghum in the dry savannah zone.

Damage is caused by the caterpillars, which first feed on young leaves, but then enter into the stems. During the early stage of crop growth, the caterpillars may kill the growing points of the plant, causing what is known as dead-heart (the youngest leaves can be easily pulled off).

At a later stage of growth, they make extensive tunnels inside the stem. This disrupts the flow of nutrients to the grain. Tunnelling weakens the stem so that it breaks and falls over. In older plants the first generation caterpillars bore in the main stem but later some of the second generation bore into the maize cobs. Caterpillars also tunnel into the peduncles of sorghum and millet inflorescences, and may seriously affect grain production.

Because maize plants don't produce tillers, they are less able to tolerate stem borer attack than sorghum and pearl millet plants and the effect on grain yields is therefore greater.

Studies on several stem borers in Africa showed that an increase in nitrogen is related to higher pest loads and tunnel damage. However, soil nutrient levels, such as nitrogen, greatly influenced the plant's tolerance to stem borer attack as well. This is due to an increase in plant vigour, which is reflected in lower yield losses (Setamu et al., 1995).

Damage caused by stem borers can average 20 to 40%, which means between 2 to 4 bags of maize are lost out of every 10 that could be harvested.

Grains damaged by pests such as stem borers become susceptible to infection by mouldy fungi such as Aspergillus - see photo on the right side - which produce aflatoxin, a toxic by-product extremely poisonous to people and which can lead to liver cancer. 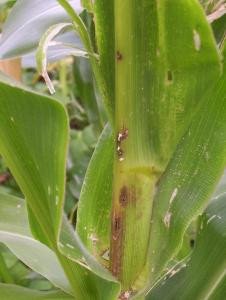 Stem damage on maize stalk by

The main hosts of the African stalk borer are maize and sorghum. This stem borer is also a pest of pearl millet in Mali, Burkina Faso and Eritrea. It also attacks few grass species, wild sorghum species mainly, but it is rarely found in natural habitats.

Young plants show small holes and 'window-panes' in the leaf whorls where tissues have been eaten away. Small dark caterpillars may be seen in the funnel. In severe attacks the central leaves die, forming the characteristic dry, withered 'dead-heart'.
Symptoms in maize plant include dead heart, plant death, dieback, internal feeding and presence of frass in the stems. Older caterpillars tunnel in stems, and eat out long frass-filled galleries, which weaken stems and cause breakages.

Biology and Ecology of the African Maize Stalk Borer

Pupae are shiny yellow-brown to dark brown and about 25 mm long. After 7 to 14 days the adults emerge from the pupae and come out of the stem.

Scouting and early control is essential for effective management of stemborers. Check the crop regularly. First signs of stalkborer attack are small holes or 'window panes' in straight lines across the newest leaves of maize or sorghum.

Destroy crop residues. This is important to kill the pupae left in old stems and stubble and to prevent carry-over populations. It also limits initial establishment of the pest on the following season's crops.

Plough and harrow. These practices help reduce borer populations by burying them deeply into the soil or by breaking the stems and exposing the caterpillars to natural enemies and to adverse weather conditions.

Slashing maize and sorghum stubble, complemented with cultivation by disking and ploughing can reduce larval populations by almost 100% (Kfir et al, 2002).
Burning crop residues is an effective way of killing stem borer caterpillars, but can create problems in farms where the organic content of soils is low and soil erosion is severe, since in many cases crop residues are the only organic matter added into soils in smallholder farms.
Alternative ways to destroy diapausing caterpillars without destroying the stems are needed in areas where stems of cereals are used as building and fencing materials, fuel, bedding for livestock, or as stakes. In this case, partial burning is recommended, while the leaves are dry but the stalks are still green. Heat generated from the burning leaves kills up to 95% of stem borer caterpillars within the stems, and at the same time cures the stalks, improving their quality as building materials and making them more resistant to termite attack.

Destruction of wild sorghum, which would act as alternative host, may help to reduce population upsurge.

For these cultural measures to be effective, the cooperation of farmers in a region is required because moths emerging from untreated fields can infest adjacent crops.

Maintaining soil fertility or practices that increase nitrogen use efficiency in maize production are important for management of the African stalk borer. Thus, in studies in Cameroon, soil application of nitrogen improved the nutritional status of maize, which consequently enhanced its tolerance to the African maize stem borer attack (Chabi-Olaye et al; 2008). However, if nitrogen is applied at rates greater than required for maximum yield, plant biomass increases at expenses of yield.

Technologies to restore soil fertility include cereal-legume rotations, use of farmyard manure and green manure cover crops, among others. Legume cultivation and rotation are highly efficient in improving the supply of nitrogen in the soil.

Maize-legume rotation sequences improve the supply of nitrogen in the soil and the nutritional status of maize, which compared to maize-maize sequences. This influences the maize susceptibility to pests and diseases.

The use of short duration fallows with leguminous cover crops and grain legumes have been useful in reducing yield losses due to borers in the subsequent crop. Rotation with grain legumes (cowpea and soybean) or leguminous cover crop pigeon pea and mucuna (Mucuna pruriens) improved the supply of nitrogen in the soil and enhanced the yield of subsequent maize crop in the humid forest of Cameroon.

An improved nutritional status of the plant led to an increase in attacks by the African stalk borer at the early stages of the plant growth, but also improved plant vigour, resulting finally in a net benefit for the plant and grain yield (Chabby-Olaye et al., 2005).

The importance of plant biodiversity in maize agroecosystems for reducing borer's infestation on maize has been recognised in sub-Sahara Africa.
Maize intercropped with non-host crops (e.g. cassava and grain legumes) have significantly lowered stemborer damage and had higher yield than monocrop maize. The effect is variable, if the crop to be protected is not planted after the companion crops. In studies in Cameroon, maize monocrops had 3 to 9 times more stems tunnelled and 1 to 3 times more cob damage than maize intercropped with non-host crops such as cowpea, cassava and soybean, which resulted in a higher yield in the intercropped maize.
In the mixed cropping system maize was planted 12 to 14 days after the non-host plants. Two plant arrangements were used:
1. One maize plant was followed by a non-host plant and 2. Strip planting in which two rows of maize were followed by two rows of a non-host crop and with one row of non-host plants as borders.

Maize yield losses due to stemborers were about 2 to 3 times higher in monocrops than in intercrops. In addition land-productivity was higher than with monocrops. The maize-cassava intercrop was the most effective in terms of land use and the most productive compared to pure maize stand with pesticide application. The net production of mixed cropping systems was economically superior to controlling stemborers with insecticide in monocropped maize (Chabi-Olaye et al, 2005; Chabi-Olaye et al, 2006).

Studies in Kenya suggested that intercropping maize and/or sorghum with cowpeas reduced damage caused by the African stalkborer (Amoako-Atta and Omolo, 1983; Reddy and Masyanga, 1988). Trials in Eritrea showed that sorghum intercropped with haricot beans, cowpea, desmodium and Dolichos lablab had much lower deadheart damage compared to pure stand sorghum (ICIPE, 2005).

Push-Pull is a simple cropping strategy, whereby farmers use Napier grass and Desmodium legume (silverleaf and greenleaf Desmodium) as intercrops. For a more detailed description on push-pull click here

Application of baits at first signs of stalkborer attack (small holes in straight lines across the newest leaves of maize or sorghum) - one pinch per affected plant applied inside the funnel of maize plants.
Examples of bait: Pymack (byproduct of pyrethrum production sold as cattle feed in Kenya) provides some control, maize flour or bran mixed with pyrethrum extract reportedly provides good control.
Scouting and early control is essential for this method to have any effect.
Caution: Application of too much bait inside maize and sorghum funnels can kill the growing point - a pinch of bait per plant is enough.

Many natural enemies of the African stalk borer have been recorded in Africa. The most important are predatory ants, parasitic wasps and parasitic flies. Parasitic wasps may attack eggs (e.g. Trichogramma spp. and Telenomus spp.) or caterpillars (e.g. Bracon spp and Cotesia sesamiae). Tachinid flies parasitise caterpillars. Cotesia sesamiae is the most common larval parasitoid (attack caterpillars) of this stemborer on maize in eastern Africa.
For more information on natural enemies click here.

Simple neem products are reported to be effective for control of stemborers, including the African maize stalkborer. It is recommended that a small amount of neem powder (ground neem seeds) mixed with dry clay or sawdust at a rate of 1:1 be placed in the funnel of the plant. One kg powder should be sufficient to treat 1500 to 2000 plants. In this method rainwater dissolves the active substances in neem powder as it gathers in the funnel and washes out the powder. Where rainfall is irregular a liquid neem seed extract can be sprayed into the funnel.

The treatment should be repeated every 8 to 10 days during the sensitive growing phase. Thus, roughly three treatments are required per crop. This recommendation applies only for young plants before flowering and not for older plants. Neem powder should be always applied as a mixture with inert materials (sawdust, rice hulls or dry fine clay), as the powder alone can be phytotoxic (harm the plants) owing to its oil content (Dreyer, 1986).

In studies in Tanzania, aqueous seed extracts combined with extracted ground neem seeds and sawdust, applied twice to the whorl of maize leaves was as effective in controlling the African stalkborer as endosulfan. The extract was prepared by soaking 120 g of neem seeds and 120 g of sawdust in three litre of water for 12 hours. The mixture was filtered and the residue and the aqueous extract were then applied separately to the maize plants (Hellpap, C., 1995). For more information on neem click here.

ICIPE and her partners: 'Push-Pull' Technology for the Control of Stemborers and Striga weed. www.push-pull.net