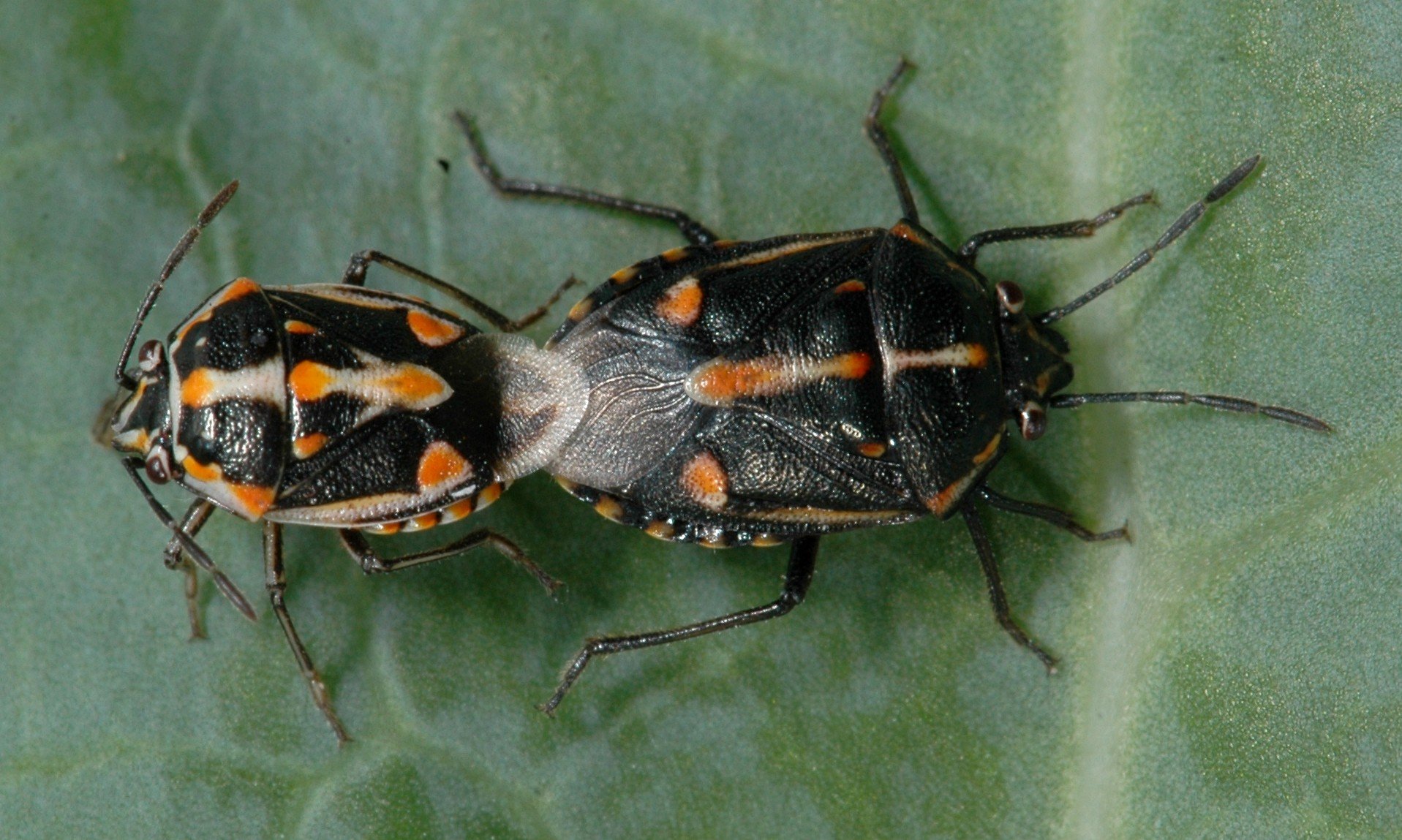 The adult bagrada bug (Bagrada hilaris) is typically shield-shaped, 5-7 mm long and 3-4 mm wide. The upper surface has a mixture of black, white and orange markings. 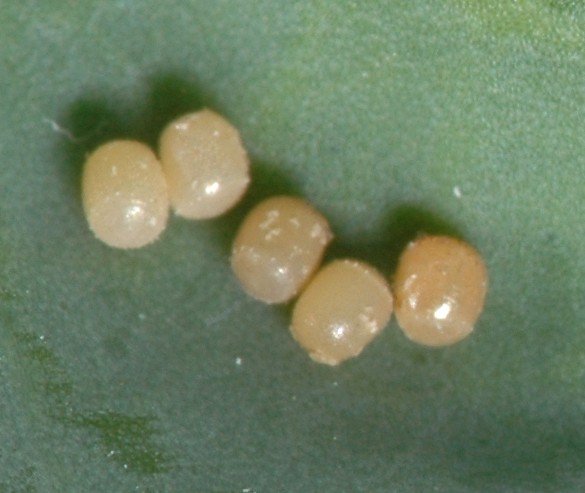 Eggs of the bagrada bug (much enlarged) 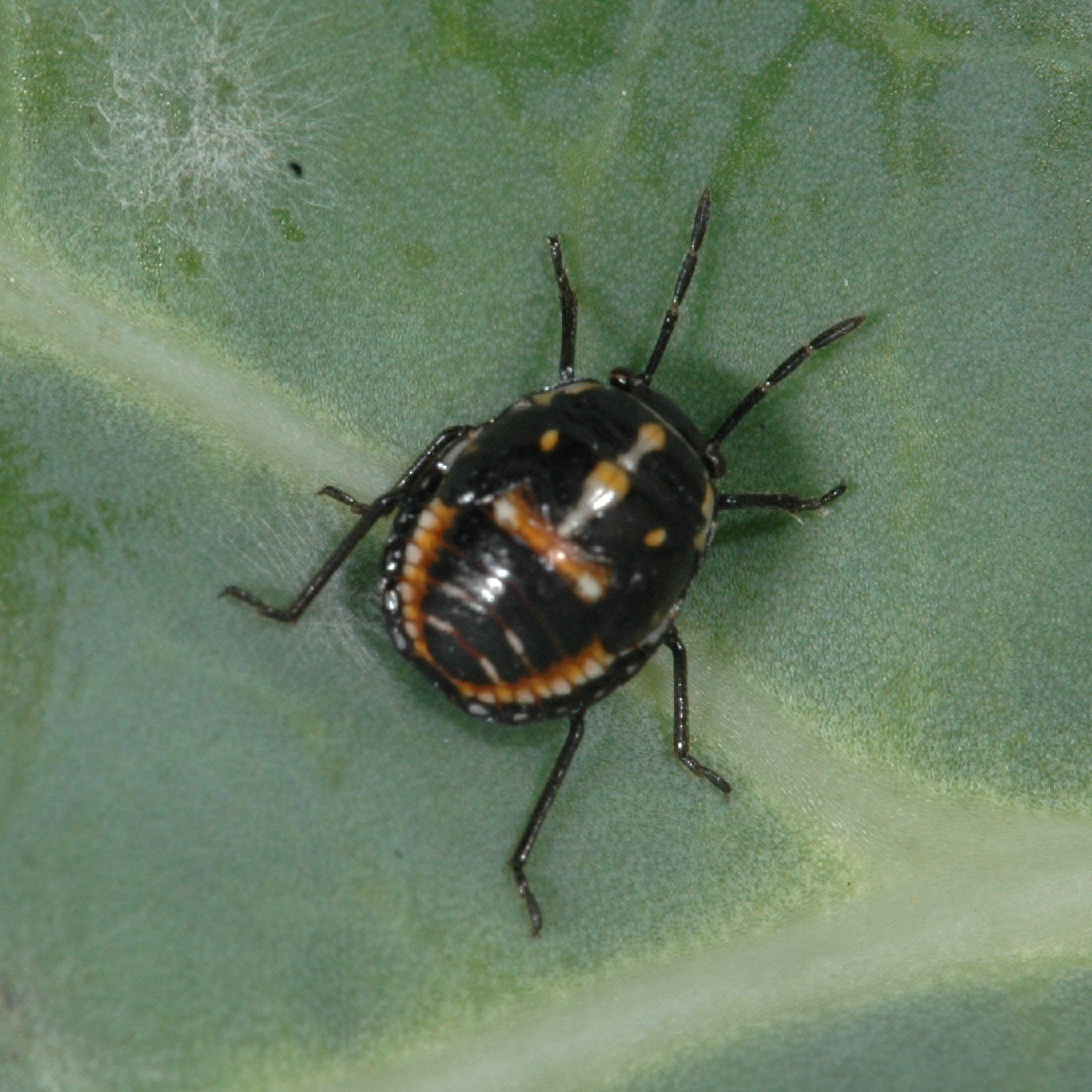 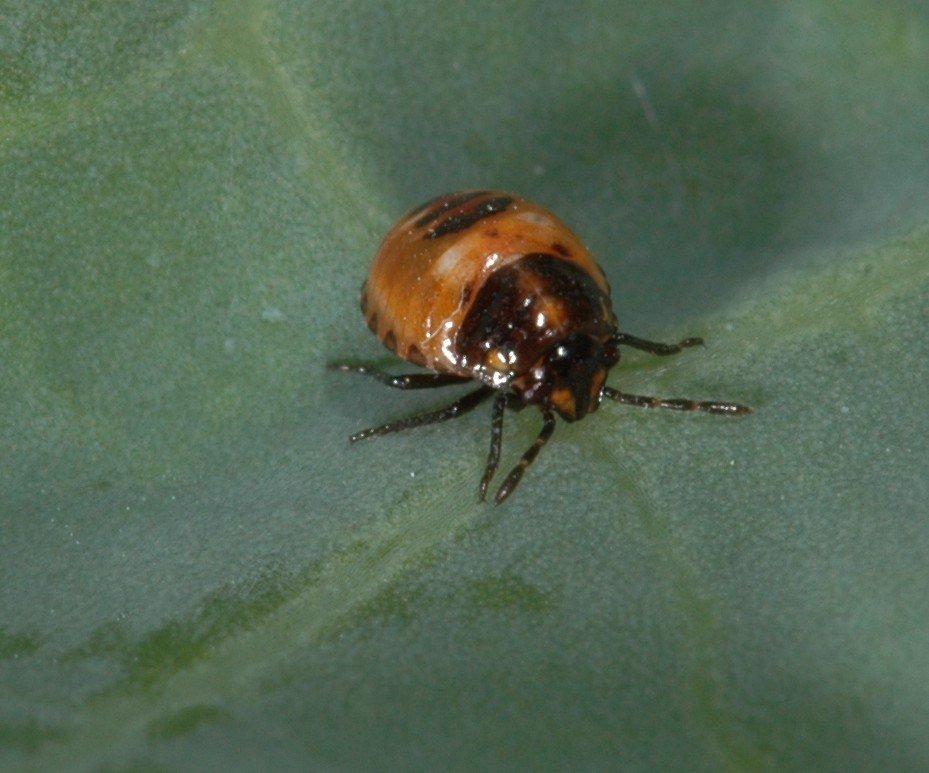 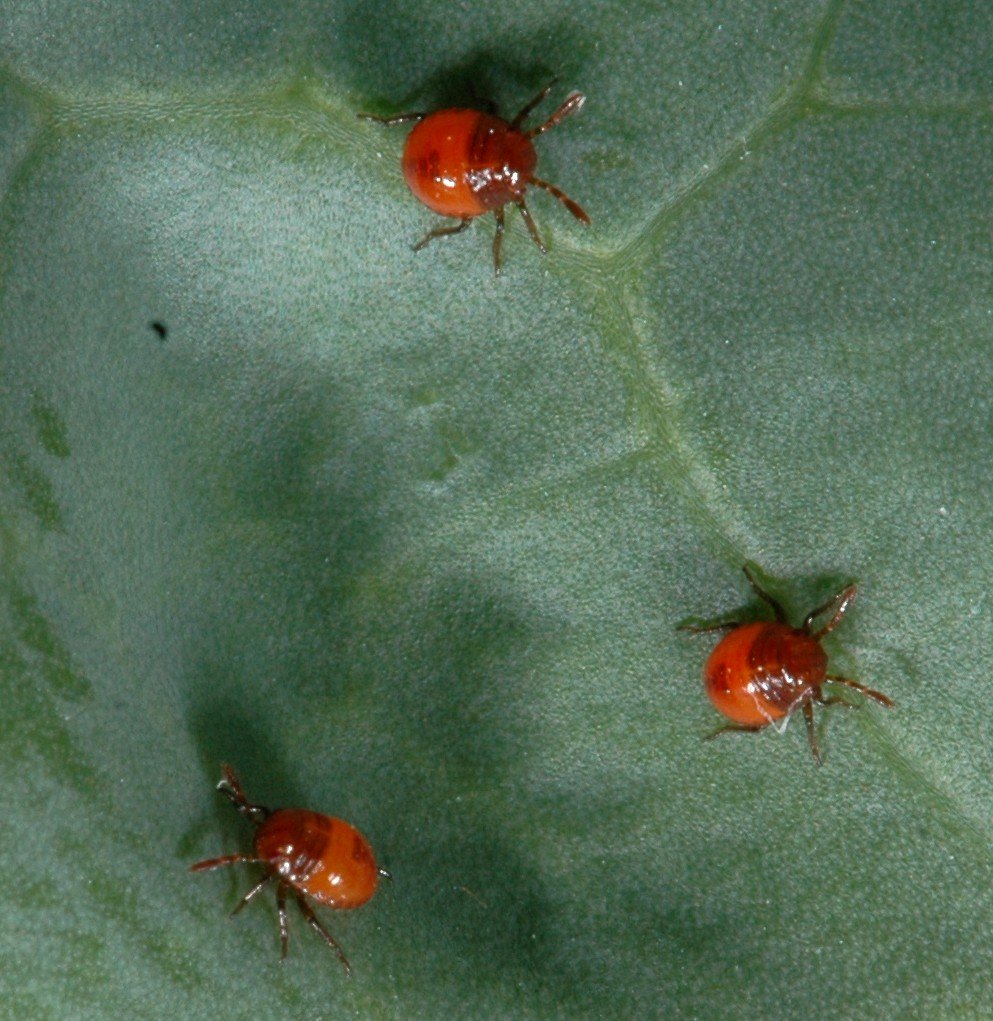 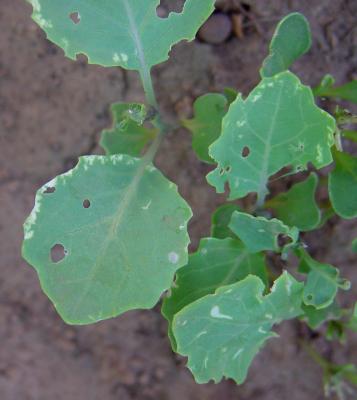 Initial symptoms of damage by bagrada bugs . Note small white punctures on the edges of leaves. 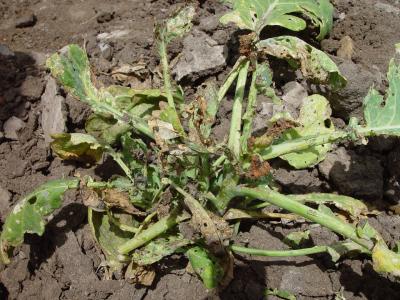 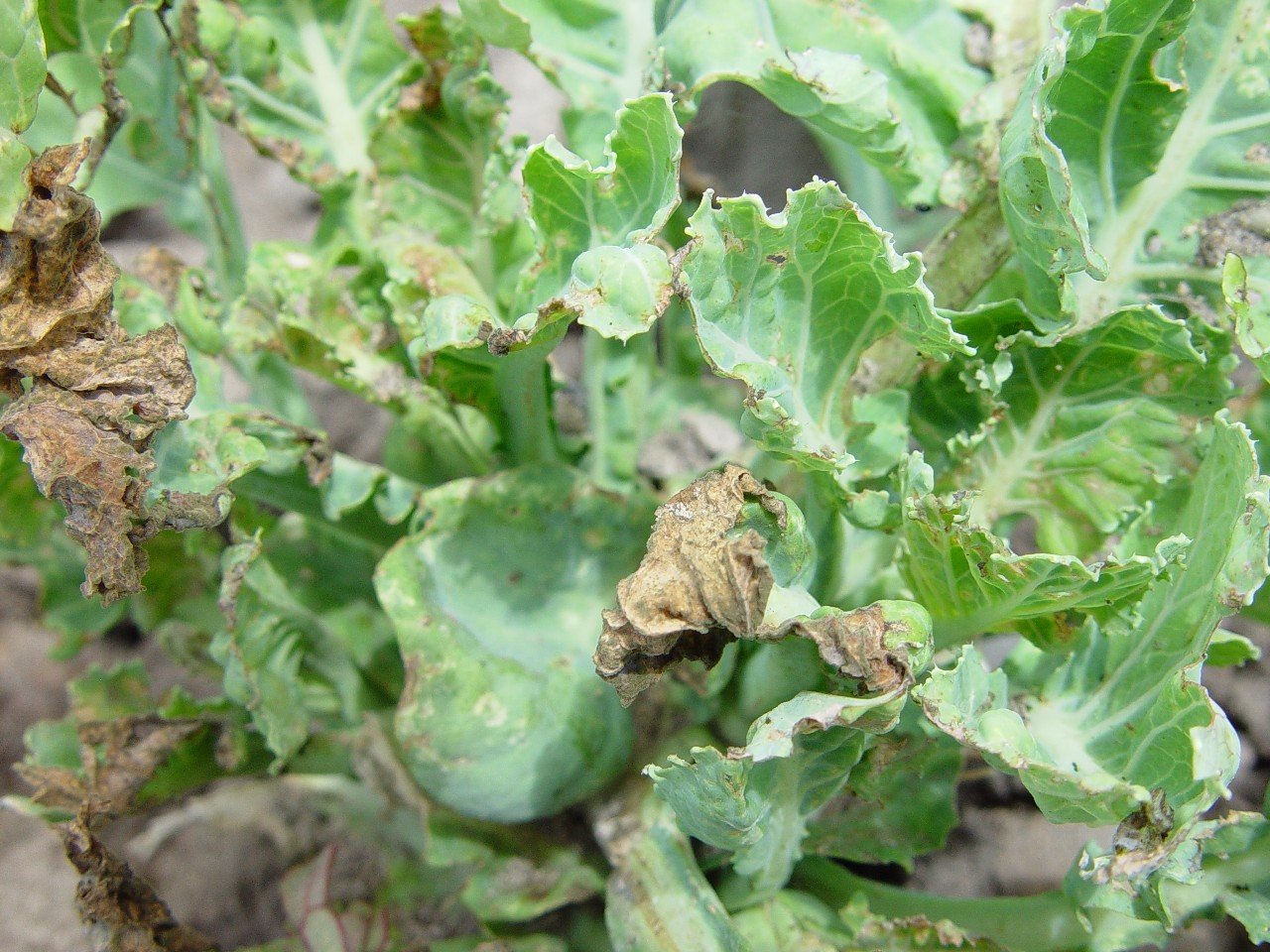 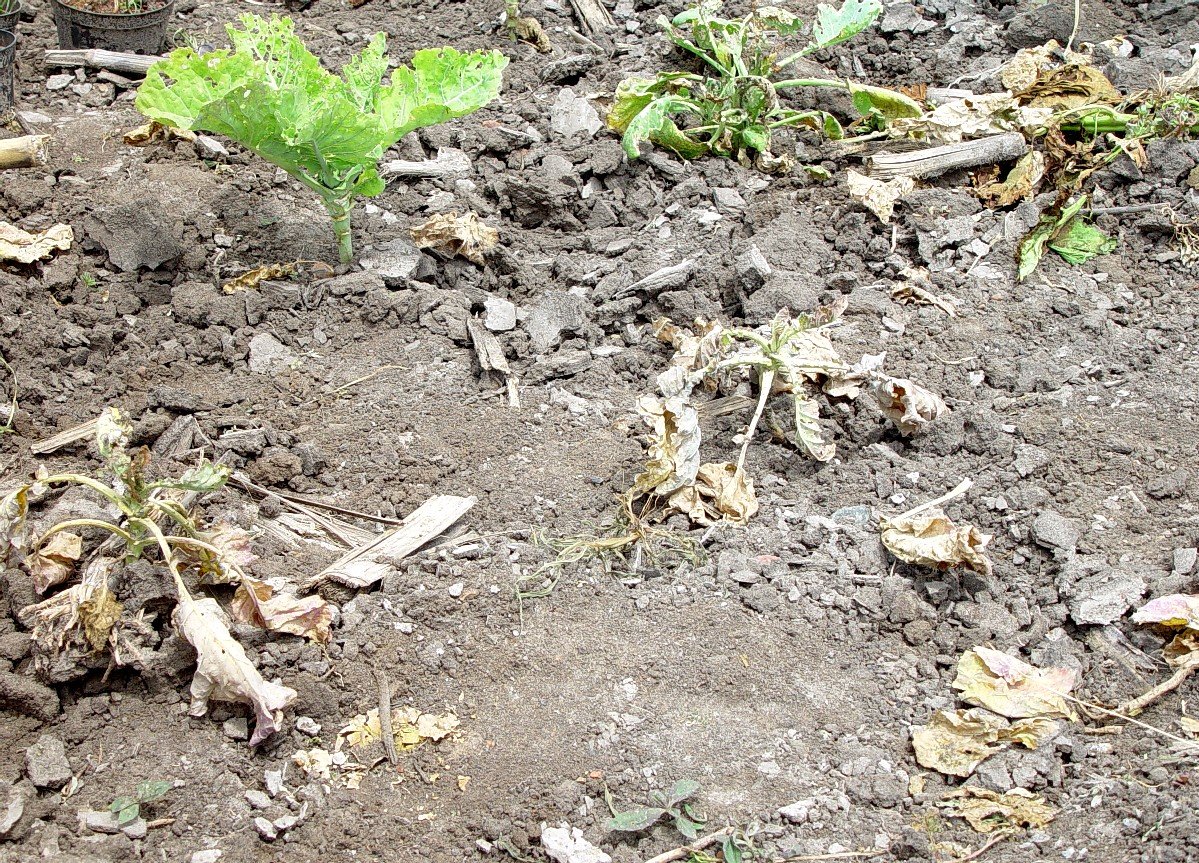 Bagrada bugs damage plants by feeding on young leaves. Both adults and nymphs suck sap from leaves, which may wilt and later dry. Considerable damage is caused to young plants, which may die or have the growth points severely damaged. Significant damage may also be caused to older plants.

Bagrada bugs are major pests of cultivated crucifers. Severe infestations on cabbage result in stunted plants, leaves turning yellow with a rough texture, and death of the growing point. As a result, damaged plants do not produce heads or produce two or more small unmarketable heads instead of a large central head.

The bugs, especially in the early stages of development, gather in masses and suck the sap from plants. Feeding by the bugs causes small puncture marks visible as white patches starting on the edges of leaves. Eventually the leaves wilt and dry. Heavily attacked plants may have a scorched appearance.

The bagrada bug is a common stinkbug on cabbage, kale, rape, Chinese cabbage, turnips and other crucifers such as radish. It also attacks potatoes, beetroot, papaya, maize, sorghum and pearl millet, legumes and cotton. It has also been recorded as an occasional pest on groundnuts, wheat, and rooibos tea. The bagrada bug has also been reported as a pest of capper (Capparis spinosa) (Colazza et al. 2004).

Biology and Ecology of the Bagrada Bug

The adult bug is typically shield-shaped, 5 to 7 mm long and 3 to 4 mm broad at its widest area. The upper surface has a mixture of black, white and orange markings, which gives the insect its common names harlequin bug or painted bug.

The life cycle lasts 3 to 4 weeks and several generations may occur in a year.

Further below you find concrete preventive and curative methods against Bagrada bug.

Regular monitoring of the crop is important to detect bagrada bugs before they cause damage to the crop.

Research in Namibia has shown that control measures should start if the number of bugs/m2 in the early growing stage exceeds one. If the crop is past the early growing stage, a higher threshold level of 3 bugs/m2 can be maintained (Keizer and Zuurbier). However, note that these thresholds are given as examples. Economic thresholds depend on many factors (crop stage, crop age, and socio-economic and climatic conditions) and cannot be adopted without taking into consideration local conditions.

Crop hygiene, in particular removal of old crops and destruction of weeds of the family Cruciferae prevents population build-up.

Handpicking and destruction of the bugs helps to reduce damage. This is particularly important in the early stages of the crop. Hand picking is only practical in small plots.

Eggs laid in the soil are readily killed by cultivation, so frequent light cultivation (once or twice a week) of the vegetable beds will help in controlling this pest (Keizer and Zuurbier; Horticultural Research Program, Botswana).

Watering and overhead irrigation disturb the bugs discouraging them from feeding on the crop. However, note that use of sprinkler irrigation may lead to increase of diseases such as black rot and downy mildew.

Growing strong smelling plants such as garlic, onion or parsley near the crop are reported to reduce infestations (Dobson et al, 2002).

A mixture of chilli, soap, garlic and paraffin has shown to be an effective control method in trials in Namibia (Keizer and Zuurbier).

In Namibia there are reports that sprinkling the plants with crushed bagrada bugs repels other bugs. This can be used effectively in combination with frequent soil cultivation (Keizer and Zuurbier).

Spraying plants with a soapy solution (bar soap) has been found effective against bagrada bugs. It helps to wash off young bugs (Dobson et al, 2002; Elwell and Maas, 1995).