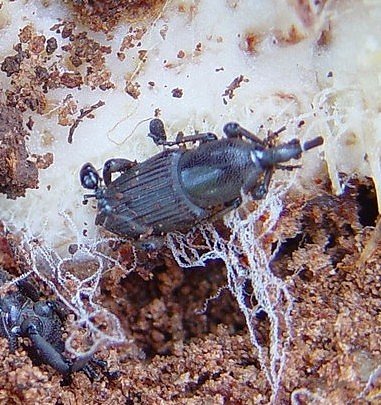 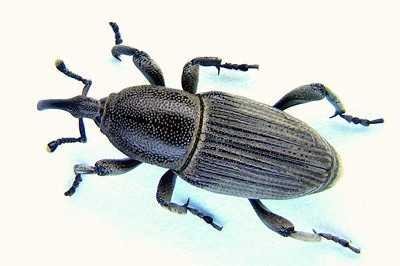 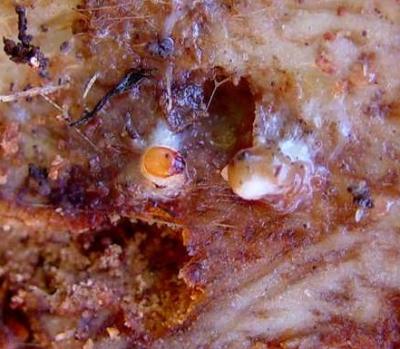 Grubs of banana weevils in tunnel in banana corm. The fully-grown larva is about 1 cm long. 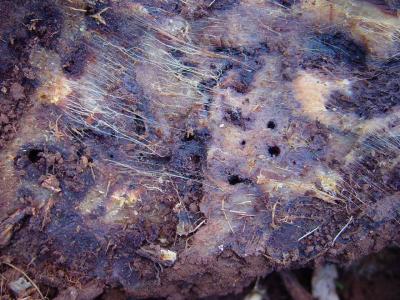 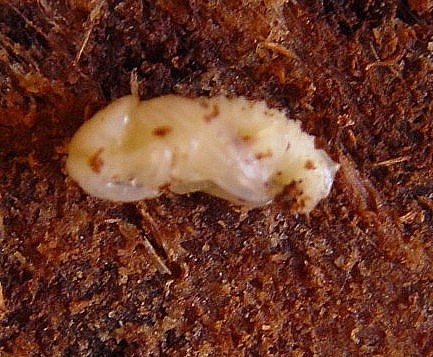 Pupa of banana weevil is white and about 12 mm long (picture much enlarged). As it develops, the shape of the adult becomes visible.

Geographical Distribution of Banana weevil in Africa (red marked). Updated on 10 July 2019. Source Plantwise.
The banana weevil (C. sordidus) is known from virtually all banana-growing countries of the world, including the New World, Afrotropics, Oriental and Australasian regions.

Grubs feed making irregular tunnels in the corm and rootstock. Tunnels are roughly circular and can reach up to about 8 mm in diameter. The corm can be riddle with tunnels, which promotes fungal infection and decay reducing it to a black mass of rotten tissue. Injury to the corm can interfere with root initiation and sap flow in the plant, as a result the leaves turn yellow, wither and die prematurely. In particular young suckers show symptoms of wilting and die, but older plants are retarded in their growth. Heavily infested plants produce small bunches, and are easily blown over by the wind. Spent stems, cut or standing are attacked rapidly.

Damage is worst in neglected plants. In fertile soils and with good crop husbandry it is seldom serious. Banana weevil numbers are often low in newly planted fields. Population build-up is slow and weevil problems are most often encountered in ratoon crops. The banana weevil damage is more serious in low altitude areas that in highland areas as a result of the influence of temperature. Weevils are usually not a problem beyond 1500 m above sea level (Karubaga and Kimaru, 1999; Gold and Messiaen, 2000).

Banana weevil is an important pest of banana and plantain (Musa spp.), and ensete (Ensete spp.). Weevil problems appear to be most severe in plantains, highland cooking bananas and ensete. The weevil has contributed to the decline and disappearance of highland cooking banana in parts of East Africa. Weevil pest status in other groups of bananas is variable. In commercial Cavendish plantations where the banana weevil has been reported to be relatively unimportant (Gold and Messiaen, 2000).

Infestation by the banana weevil begins at the base of the outermost leaf-sheath and in injured tissues at the lower part of the pseudostem. Initially the young grubs make several longitudinal tunnels in the surface tissue until they are able to penetrate to adjacent inner leaf-sheaths; they then bore into the pseudostem base and rhizome/corm, but also into the base of suckers and into roots. Larval tunnels may run for the entire length of fallen pseudostems. Infested plants have dull yellow green and floppy foliage. Young infested suckers often wither and fail to develop. Plants are easily blown down by mild to strong winds.

Biology and Ecology of the Banana Weevil

The eggs are elongate-oval, about 2 to 3 mm long and white in colour. Eggs are laid singly in small cavities that are chewed out by the female in the base of the pseudostem just above ground level, in the upper part of the corm, in roots near the soil surface and at the end of cut stems (stumps). Due to their white colour they are rarely seen in the corm tissue. The duration of the egg stage is very variable (4 to 36 days) depending on temperature. Hatching takes place after 6 to 8 days under tropical conditions.

The larvae (grubs) are creamy white legless grubs, stout and distinctly curved and swollen in the middle of the body. The head is reddish-brown with strong mouthparts. Fully-grown grubs are about 12 mm long. Under tropical conditions, the larvae complete their development and pupate in 20 to 25 days.

Pupae are white and about 12 mm long. Pupation takes place in holes bored by the grubs. As it develops, the shape of the adult becomes visible. Adults emerge from the pupae 5 to 7 days after pupation.

Adults are 10 to 16 mm long weevils (snout beetles), hard-shelled, with a rather long curved snout. Newly emerged weevils are red brown, turning almost black after a few days. They are free living They are most commonly found between leaf sheaths, in the soil at the base of the mat or associated with crop residues. They often remain within the plant before biting the external sheath and leaving the banana plant. They feed on dead banana plants, newly cut stems and other decaying plant material near the base of banana plants. Weevils may live for up to 2 years, and can live without food for 6 months, but are very sensitive to desiccation and will die within 48 hours if kept in a dry substrate. They are active at night. The adults are sluggish rarely fly, but commonly walk over the soil surface and vegetation and feign death when disturbed. Adults are not strong flyers and only cover short distances.

Further below you find concrete preventive and curative methods against Banana weevil.

Use clean planting material. Planting infested rhizomes/corm and suckers increases damage. This can be done by:

A simple method for farmers to control temperature has been developed in Kenya. It consists of a pith block (of about 3 cm) or a small piece of wood tied to an iron plate (3 x 3 cm and weighing about 10 g) covered with a thin film of candle wax. This device is allowed to sink in a half-empty oil drum with water, in which the banana material to be treated is placed. Wood is burnt underneath the drum, when the temperature rises to 55degC the wax melts releasing the pith or piece of wood, which then floats to the surface. At this moment the firewood is removed. (Prasad and Seshu Reddy, 1994).

Do not replant previously infested land while old corms remain on the ground, or where insufficient time has passed for adult weevils to die after remnants of the previous crop has been removed.
Plant clean planting material as soon as possible in a new plantation. They should not be left overnight in heaps since they attract weevils and could be reinfested before planting.
Harvesting of all mature pseudostems at certain intervals, rather than continually, is suggested as a preventive measure of control. This discourages the continuous breeding of the weevil. (CABI).
Avoid moving infested plant material from plantation to plantation as this will spreads banana weevils.

Predatory ants such as the bigheaded ant (Pheidole megacephala) and Tetramorium spp. are important predators of the banana weevil. Although these ants are generalists (feed on a wide variety of food materials such as nectar, sugar, honeydew, other insect substances with high fat content, etc.) high populations in banana stands make them very efficient predators. They will enter crop residues and living plants in search of weevil eggs, grubs and pupae. These ants have reportedly contributed to the successful control of banana weevil in plantain in Cuba. These ants can be encouraged to nest in pseudostem pieces that can then be used for further distribution. They are widespread and may also be important predators on the weevil in other localities. Studies in Tanzania and Uganda have shown that several species of ants are important natural enemies of the banana weevil in the region (Aberra, et al, 2007, A. M. Varela, icipe, personal communication).

Some fungi (e.g. Beauveria bassiana and Metarhizium anisopliae) have shown efficacy as control agents of this pest. Some of them caused weevil mortality of over 90%. In Cuba, the fungus Beauveria bassiana is reported to be effective against the banana weevil in combination with ants (CABI, 2000). However, there is little information on the performance under field conditions. Moreover, the distribution and application of these biocontrol agents are still restricted by lack of facilities and high costs.

Some nematodes, (Steinerma and Heterorhabditis spp.) attack both adults and grubs in the field, but economic cost and their efficacy limit their use on a large scale (Gold and Messiaen, 2000).

Applications of neem powder effectively controlled weevils and nematodes in on-farm trials and in farmer's fields in Kenya. Application of 60 to 100 g of neem seed powder or neem cake at planting and then at 4 months intervals significantly diminished pest damage and increased yields. Application of over 100 g or neem oil was phytotoxic (harmful to plants) and uneconomical.

Neem applications were economical in fertile soils with moderate pest infestation. Neem applications to banana plants grown in poor soil and under very high pest attack were uneconomical. A combination of application of cow dung and neem treatments resulted in yield increases of 50 to 75% (Musabyimana, 1999). Dipping suckers in a 20% neem seed solution at planting protects the young suckers from weevil attack by reducing egg laying through its repellent effect on adult weevils. Egg hatching rates may also be lowered in neem-treated plants (Gold and Messiaen, 2000). For more information on Neem click here.

Disc-on-stump traps and old pseudostems can be used for trapping weevils. Disc-on-stump traps consist of corm slices placed on top of harvested plants cut at the rhizome. Old pseudostems can be cut into lengths of 20 to 60 cm and split each length, and placed on the ground near the corm bases with the cut surface downwards. Adult weevils are attracted to the cut stems or corms for shelter, to feed and to lay eggs. When the eggs hatch the life cycle cannot continue as the cut pieces dry out and the grubs die from desiccation. The weevils can be collected by hand and destroyed. The efficiency of the traps depends on their numbers and frequency of trapping. Disk-on-stump traps collect 3 to 7 times as many weevils as pseudostem traps.