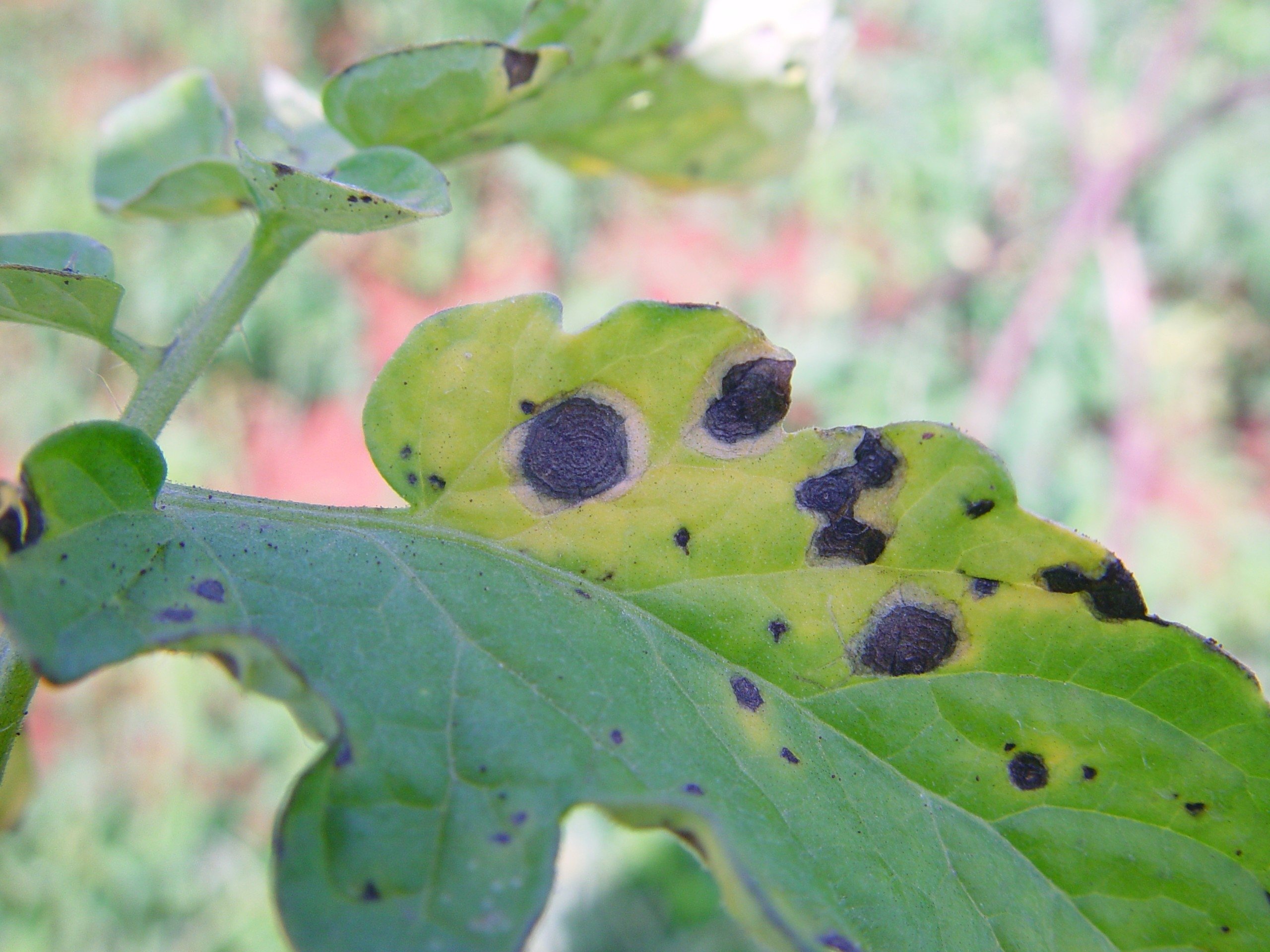 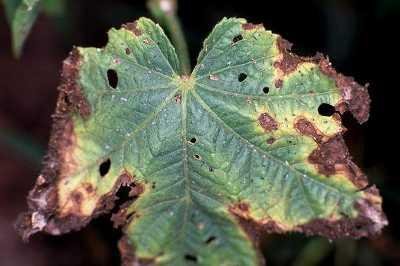 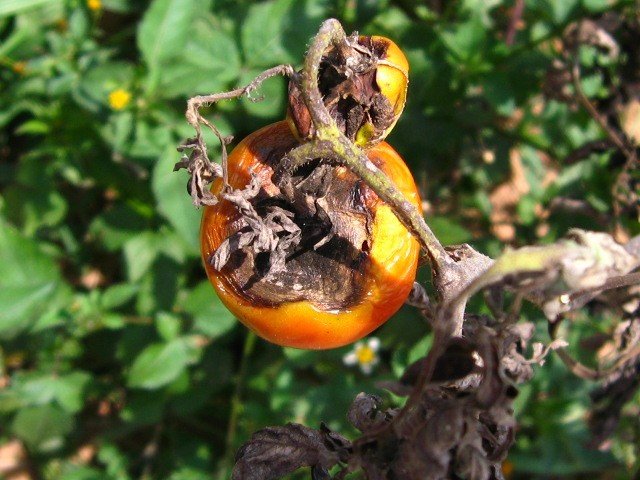 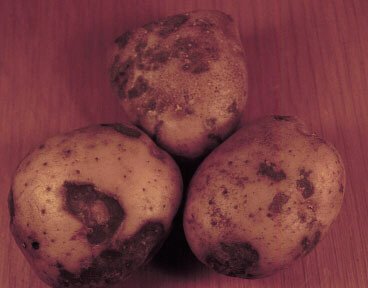 Early blight results in surface lesions that appear a little darker than adjacent healthy skin. Lesions are usually slightly sunken, circular or irregular, and vary in size up to 2 cm in diameter. There is usually a well defined and sometimes slightly raised margin between healthy and diseased tissue. Internally, the tissue shows a brown to black corky, dry rot, usually not more than 6 mm. Deep cracks may form in older lesions.

Early blight symptoms on tomato fruits. Typical fruit spots occur at the stem-end as a rot that radiates out from the area of attachment between the calyx and the fruit. The spot is usually brown to black, firm, depressed and has distinct concentric rings. 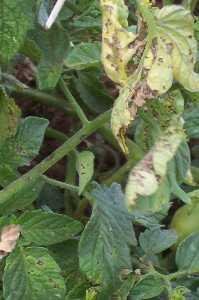 Early blight on tomato. Leaf spots of early blight are circular, up to 1.2 cm in diameter, brown, and often show a circular pattern, which distinguishes this disease from other leaf spots on tomato. 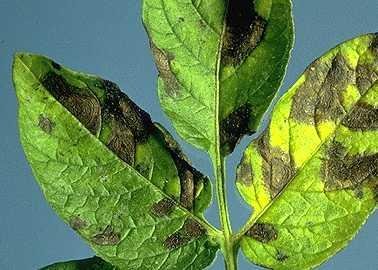 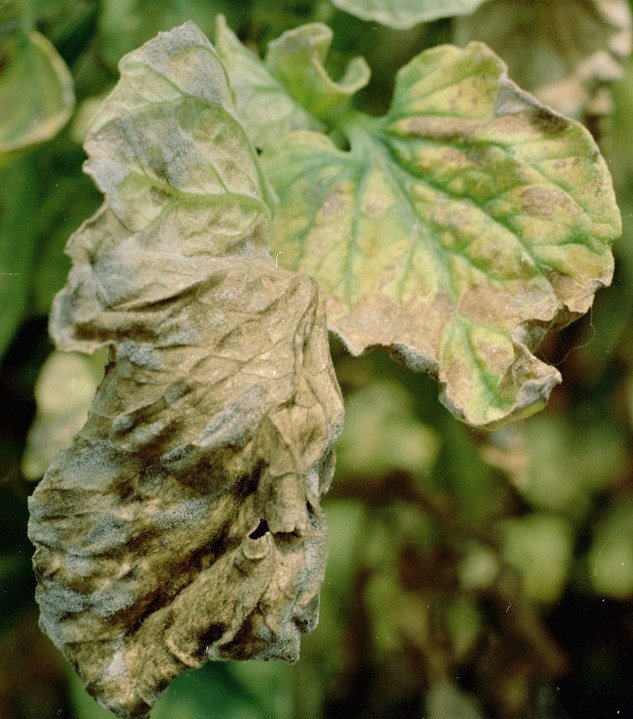 Early blight occurs in all continents and is widespread in the tropics, subtropics and temperate zone.

Early blight is one of the most common and serious diseases of potato and tomato. It is of particular importance in warm dry areas. Infection first occurs during periods of warm, rainy, humid weather. Increased damage may occur by secretions of toxins by pathogens.

All above ground parts of the plant can be affected. In seedbeds, pre- and post-emergence damping-off occurs. On young seedlings, collar rot may develop - it is characterized by girdling of the stem at the base of the plant. Affected seedlings are stunted and may wilt and die. When older seedlings are infected, stem lesions (spots) usually are restricted to one side of a stem and become elongated and sunken on stems and leaf petioles.

Affected leaves exhibit brown spots with concentric rings. Leaf spotting first appears on the oldest leaves and progresses upward on the plant. Entire plant could be defoliated and killed.

Typical fruit spots occur at the stem-end as a rot that radiates out from the area of attachment between the calyx and the fruit. The spot is usually brown to black, firm, depressed and has distinct concentric rings.

Early blight is sometimes confused with Late blight. Late blight lesions are lighter, smaller and they do not have the circular ridged bands that early blight has.

all parts except roots

Biology and Ecology of Early Blight

Early blight is caused by the fungus, Alternaria solani, which survives in infected leaf or stem tissues diseased potato tubers on or in the soil and in infected tomato fruits. This fungus is universally present in fields where susceptible crops have been grown. It can also be carried on tomato seed and in potato tubers.
Spores are formed on infected plant debris at the soil surface or on active lesions over a fairly wide temperature range, especially under alternating wet and dry conditions.

Seriousness of early blight is dependant on weather conditions and crop variety. Early blight can develop quite rapidly under humid warm conditions and is more severe when plants are stressed by poor nutrition, drought, nematode attack or a heavy fruit load. Tomato plants become more susceptible with age particularly at fruiting. In tomato seedbeds collar rot may appear almost simultaneously on many plants indicating contamination of seeds or soil. Infection of potato tubers occurs through natural openings on the skin or through injuries. Tubers may come in contact with spores during harvest and lesions may continue to develop in storage.

Early blight can be seed-borne, resulting in damping-off. Infected plant residues in the soil can carry the disease to the following season, particularly if the soil is dry. The spores are formed on the surface of infected tissue and can be spread by the wind and splashes of water.

General illustration of the concept of Infonet-biovision

Further below you find concrete preventive and curative methods against Early blight.

Use clean seed: Make sure that seeds/tubers for sowing and planting are certified and not taken from plants that were previously infected by the early blight. If possible, use potato and tomato varieties that are resistant to the disease.

Destroy crop debris after harvest: Plough under all the crop residues after harvest to physically remove the inoculum (infection) source from the topsoil. Remove also weeds as they may serve as alternate hosts. Burn the infected material and plant debris.

Crop rotation: Fields should not be planted with tomato, Irish potato, or eggplant for at least 2 cropping seasons, since they are hosts to early blight. Also avoid planting new plots of these vegetables alongside old ones. Rotations with small grains, maize or legumes are preferable.

Water management: If possible avoid over-head irrigation. Otherwise, irrigate early in the morning so that the canopy would dry in the evening. In case of Irish potatoes, furrow irrigation should not be used especially after tuber formation.

Hot water treatment of seeds, where own seeds are used, could help reduce the incidence of seed-borne infection by early blight. It will also take care of other seed-borne problems caused by pathogens such as Phoma spp., Septoria spp. and bacterial pathogens.

Specified temperatures and recommended time for treatment should be strictly followed in order to maintain seed viability. Use a good thermometer or better ask for assistance from qualified personnel from your local extension office.

To make sure that the seed is not damaged it is advisable to test the germination of 100 heat-treated and 100 untreated seeds.

Botanicals are derived from plants. Many plant products are said to have fungicidal properties. They are natural products and most of them break down quickly on the leaves or in the soil. However, there is very little information on their effective dose rates, their impact on beneficial organisms or their toxicity to humans.

Ingredients: Whole flowering plant, soap and water. Fill-in a drum with 1/2-3/4 full of flowering plants. Leave to stand for 5-10 days. Stir occasionally. Strain before use. Dilute the filtrate with water at a ratio of 1:2. Add 1 teaspoon of soap in every litre of the extract (Stoll, 2000).

For more information on plant extracts, including standard procedures for the preparation and application of plant extracts click here

Sulphur sprays are permitted as preventive fungicides in organic farming. The commercial product 'Thiovit(r)' can be used and has been reported by some farmers to have preventive effect on early blight (farmer experience in Kenya), albeit very harmfull to predatory mites.

If the problem of blight is serious, fungicide spraying may be required. Ensure that persons dealing with fungicides are trained on safe use and handling of pesticides.

There are many copper compounds that are used as fungicides. Most copper products are either based on copper oxychloride or copper hydroxide and are readily available in the market. Copper is accepted in organic farming provided that the number of applications is strictly followed and a proper soil amendment is observed to prevent copper accumulation in the soil

Note: Excessive use of copper based products can be detrimental to the soil. Constantly shake the sprayer while in the process of application of copper to prevent the solution from clogging. It is advisable to use dry flowable copper products now available in the Kenya pesticide market.
For more information on standard procedures for application of Copper click here and sulphur click here.