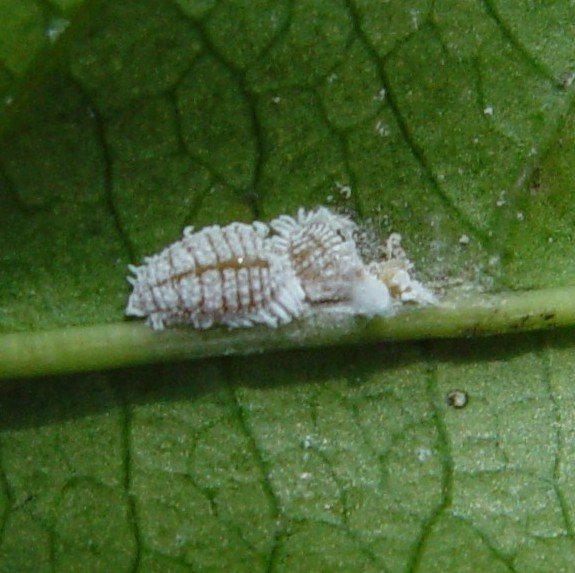 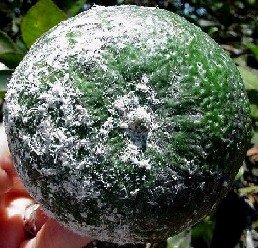 Mass of mealybugs on passion fruit. 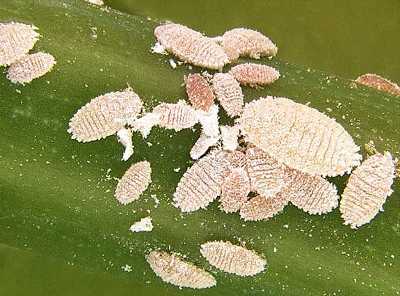 Cassava mealybug (Phenacoccus manihoti). Female mealybugs are 0.5 -1.4 mm long and their body is usually covered with a waxy secretion. 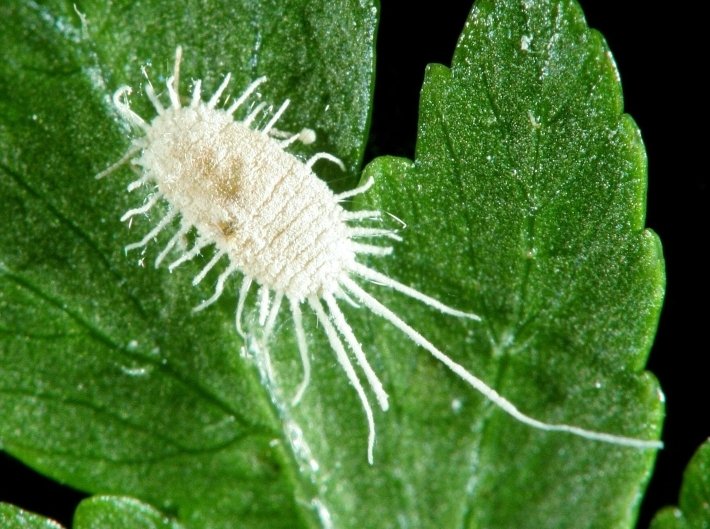 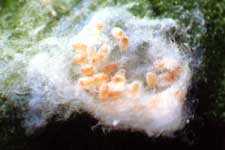 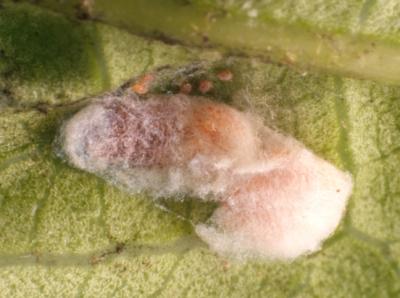 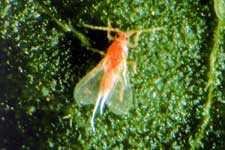 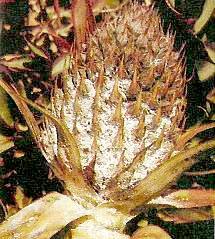 Severe infestation of pineapple mealybugs on the fruit

Mealybugs damage plants by sucking sap from roots, tender leaves, petioles and fruit. They excrete honeydew on which sooty mould develops. Severely infested leaves turn yellow and gradually dry. Severe attack can result in shedding of leaves and inflorescences, reduced fruit setting and shedding of young fruit. The foliage and fruit may become covered with sticky honeydew, which serves as a medium for the growth of sooty moulds.

Honeydew, sooty mould and waxy deposits may cover leaves reducing photosynthetic efficiency and may lead to leaf drop. Contamination of fruit with honeydew and with sooty mould reduces its market value. The honeydew attracts ants, which collect the honey and protect indirectly mealybugs from natural enemies. Some mealybugs inject toxic substances while feeding causing deformation of the plant (e.g. the cassava mealybug). Some species transmit viruses (e.g. the pineapple mealybug).

The most important species of mealybugs and their major host crops in Africa are:

Mealybug infestations of above-the ground plant parts start with the appearance of crawlers (the first-instar nymphs) on the underside of the leaves on terminal shoots, stems and other plant parts. Heavy mealybug attack appears as white, waxy masses of mealybugs on stems, fruits and along the veins on the underside of leaves. Heavy infestations usually result in coating of adjacent stems, leaves and fruits with honeydew and sooty mould. Severely infested plants may wilt due to sap depletion; leaves turn yellow, gradually dry and ultimately fall off. Feeding on fruit results in discoloured, bumpy, and scarred fruit, with low market value, or unacceptable for the fresh fruit market.

Mealybugs injecting toxic substance while feeding cause plant deformation. This is the case of the cassava mealybug; feeding of this mealybug on cassava plants causes stunting, leaf distortion, shortening of the internodes and loss, dieback and weakening of stems used for crop propagation.
Mealybugs attacking roots, as is the case of the citrus mealybug on coffee and the pineapple mealybug, cause stunted roots, rotting of roots and subsequent wilting of the plants. Roots of coffee plants attacked by the citrus mealybug are often encased in a thick case of greenish-white fungal tissue; if the fungal coat is pealed off, the white mealybugs can be seen.

Biology and Ecology of Mealybugs

Mealybug eggs are very small and are laid under a white, loose woolly wax, which remains attached to the abdomen of the females. A female may lay between 50 to 600 eggs.

Nymphs. Very small nymphs are flat, oval and yellow. Older nymphs of some species are covered with fluffy, white wax. Older female nymphs resemble the adults, but older male nymphs secrete a tiny, fluffy cocoon, within which they develop into winged adults. Upon hatching young mealybugs, known, as crawlers, are extremely mobile and may disperse over large distances. Older nymphs are more or less sessile.

Adult female mealybugs are soft-bodied, elongated, oval insects with well-developed legs. They are about 3 to 5 mm long. Their body is usually covered with a mealy waxy secretion, often extended into lateral and terminal filaments. They are wingless and do not move unless disturbed. They usually remain clustered around the terminal shoots, leaves or fruits. They live for several months (depending on the species).
The short-lived males are up to 3 mm long. Male adults have one pair of wings and several pairs of eyes but no mouth parts. Males fly about seeking females to mate with. In many species of mealybugs there are no males and females reproduce without mating. Some species lay eggs, and others give birth to living young.

Further below you find concrete preventive and curative methods against Mealybugs.

Early detection of mealybugs is necessary for effective control. Check plants for crawlers; pay special attention to the new growth (tender issues), the undersides of leaves and around leaf joints.

Mealybugs can be controlled by:

Mealybugs are attacked by numerous natural enemies, which usually keep them under control. Most common natural enemies include parasitic wasps, ladybird beetles, hover flies and lacewings. However, if many ants are present, or when broad-spectrum pesticides are used, they kill the natural enemies, mealybugs become a problem.

Mealybugs can also cause severe damage when introduced to new areas where efficient natural enemies are absent. In this case, importation of natural enemies associated with the mealybugs in the area of origin (classical biological control), have usually given satisfactory control. Thus, several natural enemies, mainly parasitic wasps and ladybird beetles, were introduced from South America into Africa for control of the cassava mealybug. The most effective has been the parasitic wasp (Apoanagyrus (=Epidinocarsis) lopezi), which has kept this mealybug at low levels, resulting on a significant reduction of yield losses in most areas in Africa.

Another example is the mango mealybug Rastrococcus invadens, which was brought under control in West and Central Africa by two parasitic wasps (Gyranusoidea tebygi and Anagyrus mangicola) introduced from India. Another mango mealybug Rastrococcus iceryoides is a major pest of mango in East Africa, mainly Tanzania and coastal Kenya. Although several natural enemies are known to attack this mealybug in its aboriginal home of southern Asia none have been introduced so far into East Africa.

The Kenya mealybug, which was a major pest of Arabica coffee in the East Rift Area of Kenya between 1923 and 1939, has been reduced to a minor pest after the release of natural enemies from Uganda in 1938.

Conservation of natural enemies is important to reduce mealybug outbreaks. This can be dome by:

Neem products have a repellent effect on some mealybugs (Saxena, 2002). For example, a 1% hexane extract of neem seeds repelled the citrus mealybug in a choice test (Jacobson et al., 1978).
Young cassava mealybugs are sensitive to neem kernel water extract (NKWE). Thus, crawlers (first instar nymphs) of the cassava mealybug were repelled by leaves treated with a 10% neem kernel water extract, and those that settled and started feeding died in the second instar. Treatment of cassava plants with neem extracts (NKWE) at concentration of between one and 25% provided good protection against the cassava mealybug. However, some phytotoxicity manifested as yellow spots on the leaves, was observed on plants treated with neem extracts. Phytotoxic damage was slight in plants treated with lower concentrations (1% and 10%), but plants treated with neem extracts at 25% showed severe phytotoxic symptoms on some of the leaves (Mourier 1997).

When necessary, spray with soapy solutions (1 to 2%) or insecticidal soaps. Spraying with a soap and water solution is reported to control mealybugs. Whenever possible, spray only infested plants (spot spraying).

Oils such as vegetable oils (e. g. rape oil) neem oil and mineral oils are useful for control of mealybugs.

Application of soap and oil: Good spray coverage and good timing is important when using soapy solutions and oils. To be effective they must come in contact with the mealybugs. Crawlers are the easiest to kill, since they are more susceptible and are more exposed than eggs, older nymphs and adults. As they grow, the wax covering their bodies becomes thicker, rendering them more resistant to insecticides. Use with caution soapy solutions and oils. These products may be toxic to some plants causing discolouration or burning of foliage. Prior to applying them extensively, apply to a small, inconspicuous branch or to a few plants and after 48 hours check for adverse reactions. Apply them when the air temperature is cool. Make sure your plants were watered well the day before you apply your control - never spray wilted plants.