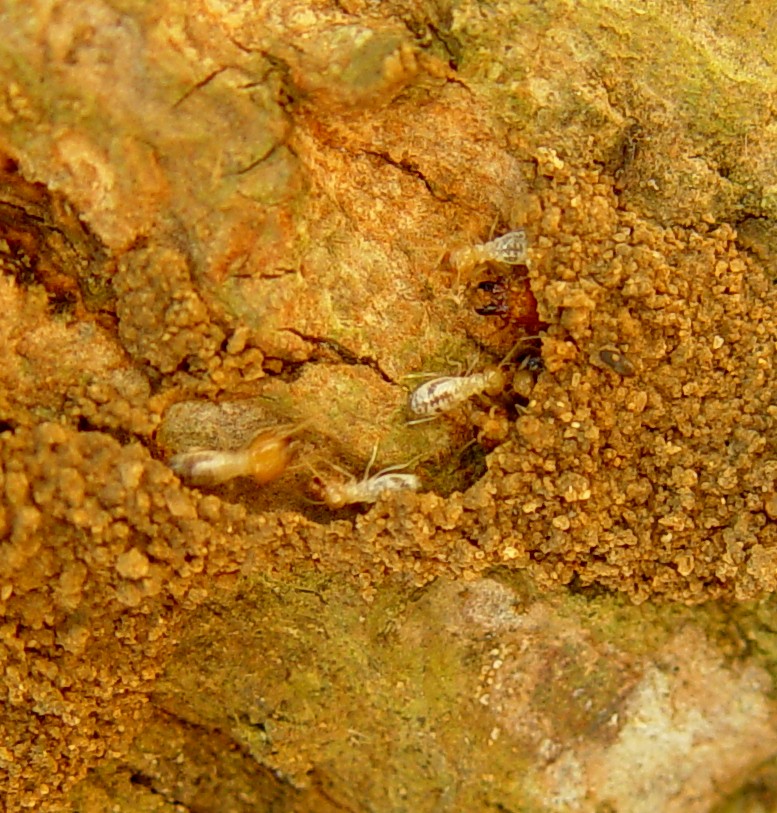 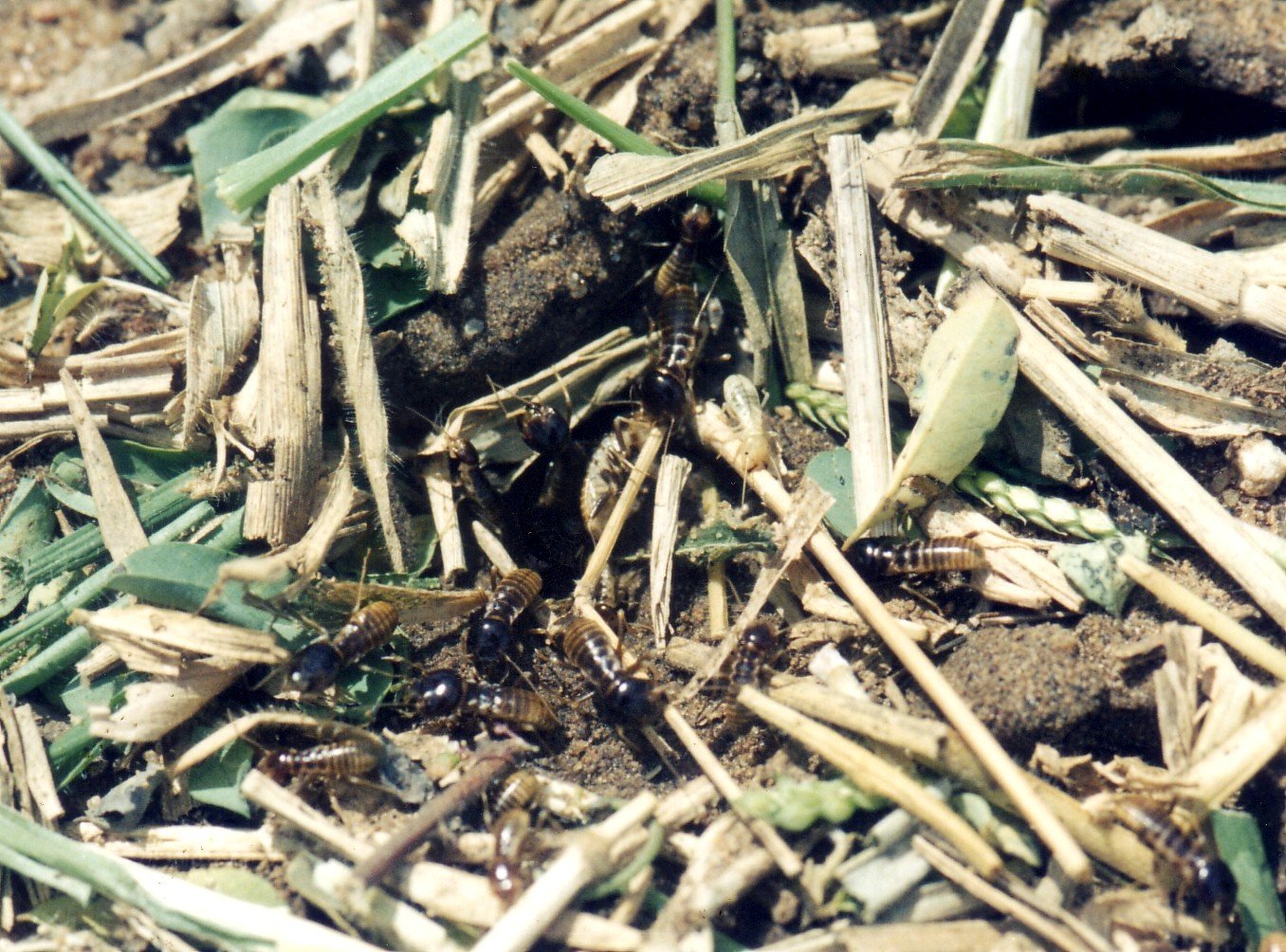 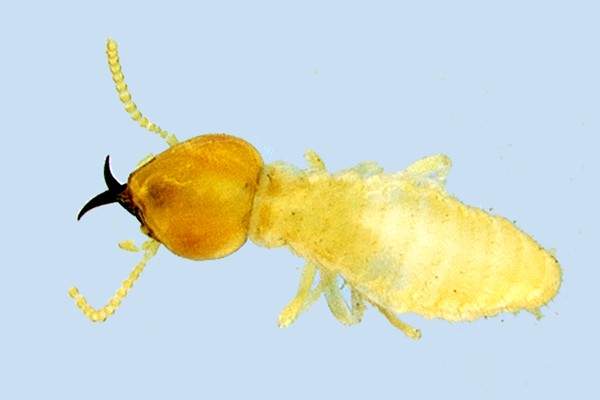 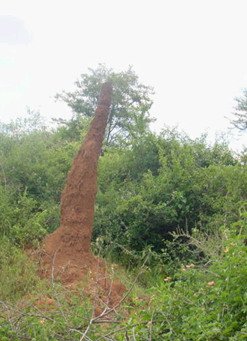 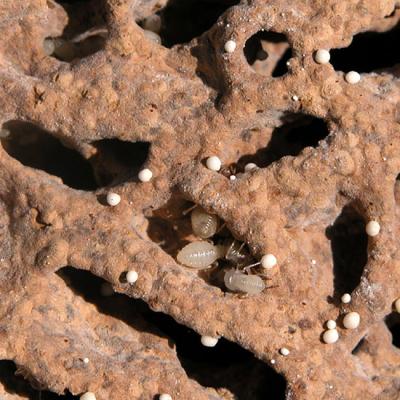 Termites and fungi in Kenya

Geographical Distribution of Termites in Africa (red marked). Updated 12 July 2019. Source CABI
Termites are probably present in most, if not all, African countries.

Termites primarily feed on wood, but some species collect green grasses and seeds and store these in their granaries inside their nest as food reserves. They are sporadic pests, and locally are important on a wide range of crops.

Some termites eat into the taproots of young plants (e.g. cotton and groundnut) immediately below the soil surface, destroying the central root portions, and fill the resulting cavities with soil. Damaged plants wilt and may die within a few days particularly under drought conditions. Some termites also attack the roots of maize and sorghum, and the damaged plants topple. Termites may also travel up through the roots into the trunk and branches. They eventually disrupt the movement of nutrients and water through the vascular system resulting in death of the plant.

Bark-eating termites attack a wide range of crops and occasionally are locally important pests. They cover the tree trunks or plant stems with tunnels built of soil, plant fragments and saliva and gnaw away the bark underneath these tunnels. Some damage is done underground to the roots and underground stem of the plant. The collected plant material is taken back to the nests for construction of fungal gardens.

Tunnelling damage may kill seedlings or ring-bark trees when large cavities are eaten out of the trees. However, they do not cause damage when feeding on the dead bark of established trees. Sometimes root damage may be serious. Some termites gain access through the dead ends of pruned branch stumps, from which they may invade the living tissues.

The sugarcane termite (Pseudacanthotermes militaris) causes poor germination of sugarcane setts, and when it attacks mature cane, the can is encrusted with earthen tunnels and stalks are often felled when nearing maturity. This termite is a major pest of sugarcane in East Africa. Other species of termites can also cause considerable damage to sugarcane; under severe attack no shoots can be formed and large gaps are left in the field.

Harvester termites cut and gather pieces of grass and wood, leaf and herbaceous twigs and carry them to the mounds. They have small earth mounds (about 10 cm) scattered through areas with short grasses. They are major pests of grasslands, and occasional pests of cotton, wheat and groundnuts.

Several species of dry wood and subterranean termites are storage pests and can become a problem in farmers' granaries or in village stores. Most of the damage occurs in wooden storage structures, but some subterranean termites also feed directly on the stored grain. Direct grain losses due to termite feeding are generally low, but contamination with moulds, as a consequence of their attack, is frequent.

The first signs of termite attacking roots on seedlings or older plants is wilting. Eventually some plants die or fall over. Pulling out the affected plants and examining the roots and lower stem for live termites and tunnelling will confirm the presence of termites. Plant roots and stems may be completely hollowed out and soil-filled.

Often plants in the field are covered with soil runways or soil sheeting, under which termites may be found. It is important to examine plants in the early morning or late evening, as termites may have moved deeper into the soil during the day when temperatures are high.

Termite attack on trees and bushes often begins in an area of dead wood produced by pruning or other damage. Small cracks or tunnels made by other insects such as wood-boring beetles may allow winged termites (reproductive stage) to enter. Termites may also travel up through the roots into the trunk and branches. They eventually disrupt the movement of nutrients and water through the vascular system, resulting in death of the plant.

Galleries in the wooden parts of the construction reveal the presence of drywood termites in granaries. As termites avoid the surfaces of attacked wood, their presence may only be detected after substantial damage has occurred. Subterranean termites construct visible galleries that are used as runways.

Biology and Ecology of Termites

Termites are social insects, living in large colonies consisting of many workers, soldiers and reproductive forms. They live sometimes in elaborate nests, some build nests on moist dead tree stumps, while others build subterranean nests, which in many cases have mounds that may reach 2 m in height. They forage away from the nest protected through underground tunnels or under soil-covered tunnels.

Termites feed on dead plant material, such as wood, leaf litter, roots, dead herbs and grasses, dung, and humus. Some termites are able to digest cellulose (wood) with the assistance of symbiotic (mutually beneficial) bacteria present in the gut of the termites. Other termites use the cellulose to cultivate fungi that are then eaten.

Eggs hatch into tiny larvae, which are incapable of feeding on their own and are raised by specialised workers of the colony. Larvae are capable to develop into any caste (workers, soldiers or reproductive forms), depending on time of year, diet etc.

Workers are whitish, wingless and usually blind. They have pale yellow round heads. They comprise the bulk of the population. Workers feed all the dependent castes. They also dig tunnels, locate food and water and build and repair the nest.

The soldiers are whitish, wingless and blind; they are larger than the workers and have large, brownish heads and strong jaws. With their specialised defensive weaponry, the role of the soldiers is to protect the colony against numerous predators such as ants and centipedes.

The reproductive termites are winged and are known as alates. Numerous winged males and females, generally dark in colour and with well-developed eyes, are produced for swarming. Swarming is often at dusk after the onset of heavy rains. After flying, they shed off their wings, mate, and burrow into holes in the soil and cracks in wood to found a new colony. The queen termite typically develops an enormously distended abdomen. At her peak, a queen will be laying an egg every 3 seconds or 30 000 a day in some species; and she will lay tens of millions of eggs during her life.

Further below you find concrete preventive and curative methods against Termites.

Following find a list of cultural practices for management and prevention of termite attack:

Termites are attacked by a wide range of natural enemies including man. In Africa masses of reproductive forms are caught in simple traps and eaten raw or roasted in oil. Natural predators include ants, dragon flies, ground beetles, some spiders, bats, many kinds of birds, frogs, and some large mammals (aardvarks, pangolins and monkeys). Despite the large number of predators, most termites are able to maintain high populations by means of mass production of reproductive forms.

Biological control measures against termites are generally difficult because of their social nature and secure enclosed environments that protect them against most natural enemies. Preparations based on insect-attacking nematodes and the fungi Beauveria bassiana and two species of Metarhizium are effective when applied into the mounds. Fungi spores can act as repellents.

Neem products reportedly have a repellent effect on termites. Odontotermes spp. and Microtermes obesi were repelled from scarifying groundnuts pods lying in heaps on the ground, by a layer of neem cake between the surface of the soil and the pods (Gold et al, 1989). Neem oil and neem leaves reduced the weight loss of wood pieces exposed to termites (Sharma et al, 1990). Neem seed extracts have been used against Microtermes termites on trees and Odontotermes termites on field crops with good results (Schmutterer, 2002).

Heaping wood ash around the base of tree trunks or mixing it into seedling bedding soil is reported to reduce termite attack. Wood ash should be replaced regularly.