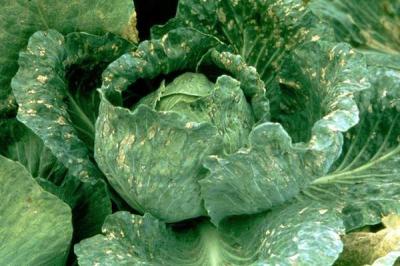 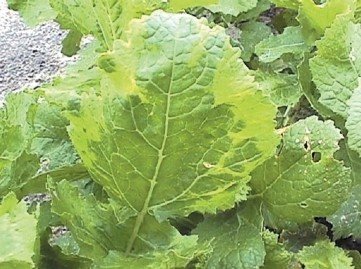 Infected plants are stunted, with leaves coarsely mottled and distorted. Black spots develop on leaves which prematurely drop. Early infection of cabbage by this virus in the seedbed or soon after transplanting, can reduce yield by 75%, whereas late-season infection has little or no effect on yield. It also reduces seed yield.

Turnip mosaic virus (TuMV) has a very wide host range infecting at least 318 species in 156 genera of 43 families. TuMV infects most cruciferous plants, but is most damaging in Chinese cabbage, turnip, mustard, and radish. It also attacks beets, spinach and tobacco.

On cabbage: Mosaic, black speckling or stippling of cabbage heads at harvest or during storage can be caused by the TuMV or the cauliflower mosaic virus occurring singly or together. The latter causes lumpy or warty growths on the veins on the under surface of leaves and vein clearing. In stored cabbage, black sunken spots develop on leaves throughout the head. The spots are considerably larger than those caused by cauliflower mosaic virus. Its mode of transmission is similar to TuMV (i.e. aphids and mechanically). However, cauliflower mosaic virus has a restricted host range. It is infectious only to members of the cabbage family (brassicas).

Biology and Ecology of the Turnip Mosaic Virus

TuMV is transmitted by aphids notably green peach aphid (Myzus pericae) and cabbage aphid (Brevicoryne brassicae) and is readily transmitted mechanically. The virus is transmitted by aphids in a non-persistent manner (short virus transmission period of 10 to 30 seconds) with no latent period (the time from start of an acquisition feeding until the vector can infect healthy plants with the virus). It can be acquired in less than one minute and can be inoculated in less than a minute. The transfer of viruses by aphids usually occurs over short distances (up to a few hundred metres), particularly down-wind and involves migrating alates (winged aphids). Weather conditions and temperature influence aphid activity and migration patterns which in turn affect dissemination of TuMV. Dry and warm conditions favour aphid reproduction and dissemination and hence early and increased spread of the virus. Cool, wet and windy conditions reduce the reproduction and movement of aphids and hence spread of the virus.

Once primary infections are established in fields, TuMV may spread relatively rapidly from plant to plant if aphids are not controlled. Seed transmission of the virus has not been observed.

Primary sources of TuMV infection are diseased host plants and weeds. Vectors can be introduced into field crops with infected transplants. Transplantscan become infected during propagation in nursery beds. It is not seed transmitted.

Further below you find concrete preventive and curative methods against TuMV.

Control of Turnip Mosaic Virus is quite difficult due to the very wide host range of the virus, the ineffectiveness of insecticides in controlling the spread of non-persistently transmitted viruses, and the lack of immune crop cultivars.

Locate seedbeds away from weedy fields. Weeds and volunteer plants should be eliminated from seedbed areas and preferably from production fields. It may be helpful to discard plants from outside rows in seedbeds.

A very common method of transferring the virus from plant to plant is on contaminated hands and tools. When transplanting seedlings, wash your hands frequently and thoroughly with soap and water. Field equipment should be used in new fields first and then in older fields. Never attempt to transplant a healthy plant into the soil from which a diseased plant was removed. Roots from diseased plants will remain in the soil and provide the virus source for the new transplant. Field sanitation, particularly, weed control is very important since the virus can infect many weed species.

In areas where Turnip Mosaic Virus is serious and endemic, growing of Danish cabbage varieties should be considered. These varieties have been reported to have some resistance to TuMV (Sherf and Macnab, 1986).