Filled with optimism that tomatoes would give him worthwhile returns, Mr Gabrielle Murgor had invested Ksh 400, 000 on a three-acre piece of land in Tinga, Magadi, growing tomatoes. Just when the crops had started to flower, Tuta absoluta struck and before he knew it, all the plants were wasting away. "From my huge investment, I only harvested a few crates which we used at home and shared the remaining with neighbours. I could not sell them as they were already affected and had little commercial value," recalls Murgor. He regrets not having engaged a professional to do soil testing and an assessment of pest and disease prevalence in the area before plunging headlong into the project. 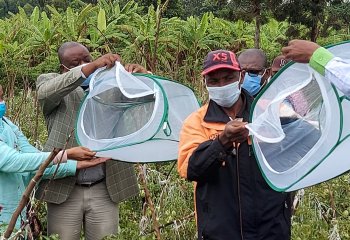 The tomato leaf miner, Tuta absoluta (Lepidoptera gelechiidae), is a devastating pest that has frustrated many tomato growers in Africa and beyond. Any tomato grower is familiar with this pest that originated from Latin America and has fast spread across the continent causing huge losses of tomato yield quality and quantity. Its ability to develop resistance to pesticides leaves farmers at a loss when it strikes. However, the International Centre of Insect Physiology and Ecology-(icipe) is undertaking a project in the fight against the resistant pest-dubbed "Integrated Sustainable Production of Tomatoes (ISPOT) in Kenya)", with the support of the Biovision Foundation.

On 29th October 2020, a group of Scientists from icipe were out in a tomato farm in Mwea East, Kirinyaga County, introducing a highly effective intervention against Tuta absoluta. In a process called classical biological control, the team from icipe released a natural enemy (wasp) that attack the larvae of the pest commonly referred to as caterpillars on tomato in the farm. The wasp species (Dolichogenidea gelechiidivoris) introduced in Kirinyaga is from South America, where the pest first originated and has been reared in the campus laboratory in Nairobi for mass release in the fields. The wasps only attacks Tuta absoluta and do not cause any sickness to animals or human beings thus they are commonly referred to as "farmers friends". The event was historic in the sense that the wasp was being released for the first time outside its native range of South America. icipe will continue releasing the wasps in Kirinyaga, a process called "augmentation" and the exercise will spread to other counties in Kenya and eventually into East Africa and the whole world in general.

Tuta absoluta infests tomatoes throughout the plant cycle and if not managed can cause a 100% yield loss. The pest also called the Tomato leaf miner, is also reported to infest other tomato relatives in the Solanaceae family such as eggplant and potatoes though it highly prefers tomato over all other host plants. In the recent past, Tuta absoluta has been declared a serious threat to tomato production in Kenya due to the difficulty in controlling it.

Effectiveness of chemical control is limited due to the pest's ability to develop resistance to commonly and widely used sythetic insecticides thereby rendering control efforts worthless. In addition, the pest's rate of reproduction is very high, with a single female moth capable of laying more than 260 eggs in a single month. Furthermore, the damaging stage of the pest (caterpillar) is often protected in the leaf mines, thus making it nearly impossible to reach with insecticides during routine spraying. The larvae of Tuta absoluta eat away the fleshy green part of the leaves producing large galleries called mines and also burrow into the fruit creating entry points for secondary infection leading to massive rotting of fruits before and after harvest. The irregular mines on the leaf often join together forming large larger galleries made of dead leaf material making the plant lose its capacity to manufacture food in the leaves. When leaves are closely examined, feeding caterpillars and their dark waste material can be easily seen. It is estimated that damage by Tuta absoluta results in up to 100% yield loss of tomato, if not properly managed. Severely attacked tomato plants wilt and eventually die and fruits lose their commercial value and are often discarded. This deprives the farmer of potential income and a source of livelihood.

As a result of the resistance to chemical control methods, farmers are advised to use IPM methods to manage the pest. Sex pheromone traps when used at low density are used for monitoring purposes as an early detection tool to determine when the pest first enters the farm. Monitoring informs the farmer of the right time to apply control measures. When several of these traps are used per unit area in the farm, the process is referred to as "Mass trapping". The lures, scientifically called pheromeones, placed in the trap attracts the male moths and they get stuck on the glue surface in a process also called "lure and kill". Farmers are also encouraged to practice hygiene and sanitation in the farm by picking infested fruits and burying them in order to break the life cycle of the pest. More IPM strategies such as the use of biopesticides are being further developed to achieve appropriate management of Tuta absoluta. Farmers are strongly recommended to use registered insecticides as and when absolutely necessary as compared to blanket calendar sprays which not only pollutes the environment by affects their health. Such practices are known to conserve the wasps thus controlling the pest naturally.

The management of Tuta absoluta requires concerted effort of policy makers and all stakeholders in the tomato value chain. Sustainable management of the pest and conservation of the released natural enemy hinges on knowledge and practical application, thus icipe will roll out Trainer of Trainers workshops and farmer field days in which farmers will acquire new scientific information and build upon traditional knowledge systems in a bid to produce safe tomatoes for all.

Biovision Africa Trust, through its various communication pathways disseminates information on various scientifically proven ecological sustainable methods of crop protection and this intervention by icipe is a major leap in the fight against Tuta absoluta.